The Russian city of Saint Petersburg is stepping up its motorsport game by building a new F1-level circuit called Igora Drive.

While the facility is not completely finished yet, the track is set to host the third round of the prestigious DTM championship at the end of May. Then in July, the FIA World Rallycross Championship will throw some dirt in the air. As for longer term, the rumor mill is going into overdrive, with many believing the new track will eventually host the Russian round of the Formula One World Championship.

It’s exciting times for top-level drifting fans, too. Currently, the Russian Drift Series is in talks with the Igora Drive management, and it’s hoped that a deal will soon be struck. A location for the third round of this year’s RDS GP championship has yet to be confirmed, but Saint Petersburg would be perfect, as Russian drifting has its roots here. Before the rise of Siberian drifters Gocha Chivchyan and Arkasha Tsaregradtsev, local drivers from Saint Petersburg, Felix Chitipahovian from the Evil Empire and Max Tvardovsky from Fail Crew, were RDS GP series front-runners for a number of years.

On a recent visit to Saint Petersburg, I caught up with all my car friends, checked how the Evil Empire Drift Team is preparing for the 2020 season, found out what’s new in the ex-Fail Crew garage, learnt something new about the Russian off-road scene, and added a vintage Hot Wheels diecast to my collection. Let’s jump in…

Sergey ‘ddKaba’ Kabargin needs little introduction in the drifting world. Even if you’re not familiar with his name, you’ll surely have heard of his purpose-built drift car, the Flanker F. We’ve previously looked at the manufacturing process, and showcased two Flanker Fs drifting on a frozen lake.

Two complete Flankers were parked up in the workshop during my visit. The orange car is Sergey’s main RDS GP machine, already tuned and tested, and ready to hit the track in May. The light blue car is a more civilized street edition, but still pumping out a solid 500hp. The third Flanker F – the dark blue car – is in Sochi right now, where Sergey competes while honing his tarmac driving skills in the Winter Drift Battle series.

Two more Flankers are being built, but nobody really knows their purpose. They might be test cars or could be sold to clients, but something interesting caught my eye – the fifth monocoque is full carbon fiber, while the others have metal components in their frames. So in a sense, the previous four cars are prototypes for this ultimate build, so it will be interesting to see how it turns out.

Aside from the Zenvo-look-a-likes, the team have just finished working on their new winter drift car, which looks just like a Flanker F, but in a 1:2 scale. It’s actually a Smart Roadster dressed in a fancy 3D-designed carbon fiber suit, but the engineering doesn’t stop there. Actually, I got lucky and was the first person to properly photograph this little beast, so I’ll save the details for an upcoming spotlight feature.

Looking elsewhere around the garage, I spotted a number of the team’s road cars, some tucked away for winter, and others waiting to be sold. The first that caught my eye was the R34 Skyline GT-R belonging to team manager Maria, who also has a C6 Corvette in the shop currently waiting on an engine swap. Then there’s Sergey’s old Lamborghini Gallardo, which is in fact a twin-turbo Hennessey-tuned version with 1,000hp, and an old Mustang drift car with a genuine Maybach 5.5L twin-turbo V12 up front.

After the Smart Roadster photoshoot, I was taken to another garage where Sergey and his team are developing a second Smart. This one has a 1.3-liter Suzuki Hayabusa engine and Lancer Evolution RS driveline components, and only a handful of factory-spec Smart parts left on it; everything else has either been modified or replaced outright.

After ungluing my eyes from the Roadster, I noticed a strange beast in the far corner of the TDG garage. With its wide fenders, it looked like what I imagine a Soviet touring car would be. In Siberia, the Lada 2102 Estate is regarded as one of the best winter drift vehicles, but this one was very different. There’s a full fiberglass body sitting over a tubular frame with a Nissan SR20DET powertrain and drift-spec suspension. Obviously there’s still a lot of work that needs to be done, but I can’t wait to see this thing finished.

Slava Kalashnikov is another long-time friend of Speedhunters, who you might remember from his crazy days at Gatebil behind the wheel of the camo Fail Crew Silvia. Since those days, Slava has been busy working in his garage, and when I visited there wasn’t much room inside for anything else.

Slava has always been into American muscle cars, and it shows. There was a 60′ Impala on one lift, a striking red Chevy Chevelle in front of it, and an El Camino with Supra-spec Wisefab and a twin-turbocharged LS setup engine setup. Slava plans on taking the pickup to Gatebil, which is probably one of the only events he’d be allowed thrash it at.

I was also glad to see that the giant, slammed Silverado C30 at the back – a project that was under the knife for many years – is now mostly complete.

Truck Garage is located only a few miles away from Slava’s shop, so I made that my next stop. I had never visited it before, but have heard so many cool stories about the workshop that I needed to check it out. The owner, who’s also named Slava, imports trucks from the United States, tunes them locally, and then sells them to clients all over the country. In Russia, there’s a lot of land that can’t be reached in a city vehicle, so these 4×4 beasts are necessity, but Truck Garage also caters to adventurers who just like going on expeditions over rough terrain.

This Toyota Tundra had just come back from such a trip, where its crew successfully tackled the off-road steppe landscapes of Mongolia. To prepare it for the overland adventure, the guys at Truck Garage joined the large cabin from a CrewMax version with a Double Cab pickup bed, before upgrading and lifting the suspension by 7-inches and fitting massive 22-inch wheels with Nitto Trail Grappler tires.

You may have noticed the Line-X protective coating on the vehicle, but what I found really interesting was the dinosaur artwork hand-painted over the top. Additional LED lights, heavy-duty bumpers and fenders, an endurance fuel tank, TRD brakes, and two winches – that’s pretty much the required kit for taking your Toyota 4×4 on a journey into the unknown.

Slava told me that after he’s finished some maintenance, the Tundra was heading to Alaska. I was also told that the owner normally commutes in the back seat of a limo, so this is quite a contrast I have to say.

By far the most interesting vehicle at Truck Garage was this custom off-roader built to resemble the legendary Soviet GAZ M-1. Original M-1s are hard to find and cost a fortune these days, so the cabin from a ’30s Chevy two-door sedan – which looks very similar – was used for this project. It’s a 2-tonne (4,400lb), 535hp, 4WD dirt-throwing machine, which I like so much that I shot a whole bunch of pictures of it for an upcoming spotlight.

The next stop on my Saint Petersburg tour was a shopping mall’s underground car park. This one was a little different than what you’d expect though, as a company called Muscle Garage had rented the floor and organized a cozy, long-term winter car show.

My home country of Estonia is obsessed with American muscle cars, so a lot of the stuff on show here was very familiar to me. But there were a few interesting inclusions, including a Richard Petty-signed Plymouth Superbird, a bunch of hot rods, a raggare-style GAZ 12 and a few clean Soviet, European and JDM vehicles on display.

The real reason for me attending this show wasn’t for the full-scale cars, though, it was the 1:64 ones. Every quarter, this parking lot floor becomes a meeting spot for a small but dedicated group of Hot Wheels collectors, and I’m one of them. After an hour or so of talks, laughs and trading, my wallet was $200 lighter and my backpack full. My Hot Wheels collecting hobby actually started after I stumbled across some old posts here on Speedhunters; now I have more than 900 models of varying rarity.

Ciay or ‘CA’ is a design studio and streetwear shop heavily involved with car culture and drifting in Russia. Every year they prepare a bunch of awesome designs for car liveries, along with merchandise for drift teams and their own collections.

Ciay has gone international with their brand, and has even collaborated with Need for Speed on decal designs and sticker packs since the 2015 game. In the drifting world, a huge number of drivers have rocked their livery designs, including Formula Drift veterans Ryan Tuerck from 2015 to 2017 and Chris Forsberg in 2016.

I’d always wanted to make it to their flagship shop in Saint Petersburg, and it didn’t disappoint. Anton, the owner, and designer of the brand was at the shop, as too were both of his project cars: the only Kenmeri Skyline in Russia and a sparkling Nissan S30 Fairlady Z. You may notice the GT-R badge on the C110 Skyline, but as it is with almost every Kenmeri on the internet, it’s actually a GTX version from 1975, but it drips of correct Japanese style. The same goes for Anton’s Z – his favorite Nissan model of all time – which features a carb’d L28 engine, ducktail spoiler and wide Hayashi Street wheels.

After picking up some fresh gear from the shop, I made my way back to the Russia/Estonia border and eventually home. Russia really is a lot different than what we see on the news, and its car culture is amazing. Hopefully, grand projects like the new Igora Drive race track will help find friendly ground with the many racing and tuning fans in this huge country. 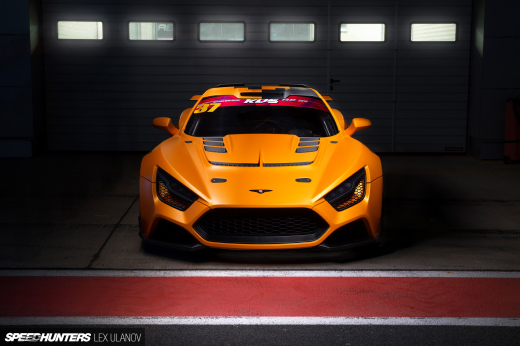 Mustang with Maybach V12 engine? Is there some photos of it?

Ever heard of the Tractorri?
A mix of the Ford Mustang and Lamborghini Gallardo?

Type in Musbach in google

I've got some. I will load the album in the Facebook in the evening and send a link o/

I think i'm in love with russia

Another fascinating post from a distant land, thanks Vladimir!