The past couple of times I’ve covered this event, I arrived in a rental car which was always quickly hidden away from the hoards of R34 owners that turn up with their cars to celebrate san-yon (3-4) day.

But this time around I brought Project Rough, and proudly parked it next to the other battle-scarred four door 25GT-Ts, albeit still out of the way of the more pristine examples.

I never had any intention of entering it in the show aspect of the event, and you might understand why if you’ve seen it in its current state.

Nor do I have the skill to enter it in the drifting competition and be judged by ER34 drift master Ken ‘Nomuken’ Nomura. And even if I did, I don’t think I would have wanted to throw it around considering how bad the weather was on the day, but I’ll get to that shortly.

My mission this time around was to bask in all things four-door, not get sick in the rain, and try and gain some inspiration for Project Rough.

I have my own ideas of course, but what better way to gain inspiration than to spend the morning with well over 100 different R34s gathered in one place.

As was the case last year, the main flavor of the day wasn’t the BNR34 GT-R, but its rear-wheel drive ER34 and HR34 cousin. As GT-R values continue to climb, more and more owners are treating them as investment pieces, which means not bringing them out as much, if ever.

All throughout the parking lot a common modifying theme showed itself: transforming non-GT-R R34 Skylines – both two-door and four-door variants – to look like BNR34 GT-Rs, with the badges and all. In fact, it was so prevalent that Nomura-san talked about it with the crowds that had gathered on the day.

Personally speaking, I hate doing what everyone else is doing, or has done. Why go through the trouble of making something your own, just to have it look the same as what others have done?

However, the more ‘four-door R34 GT-Rs’ I spotted, the more I had to admit that the look is damn cool. The woman who owned this one executed the illusion perfectly.

Everything looked so clean and simple, that someone who isn’t well versed in Nissans would surely believe that it came straight from the factory. Perhaps ‘simple’ is the wrong word to use, but the exterior changes flow together so effortlessly that it almost looks stock.

The leather interior and BNR34 GT-R digital display unit is also a vast improvement over the very hard plastic dash that Nissan specced for the ER34.

While I don’t see myself going down the stance route, this two-door was another solid argument for the GT-R look.

Slammed, aggressive fenders, and sitting on three-piece Work Meister M1s makes for a good recipe – especially in regards to the exterior.

Late last year at the StanceNation event in Odaiba, Dino spotlighted this bagged BNR34 GT-R. If you recall, one of the main eye catching features (besides the fact that it’s a bagged GT-R) was the way the Z-tune Nismo fenders incorporated R35 fender vents.

Another car that caught my eye was this demo machine from MSY Garage. Unlike many of the other four-door GT-R creations on show, the OEM and OEM+ look was thrown out the window with this one.

If the paint scheme wasn’t loud enough, the audio system made sure people were drawn in for a closer look.

The more I see exposed hardware on multi-piece wheels like the Work Zeast ST2, the more I long for a new set of wheels on Project Rough.

As is customary for this annual event, once the ‘dress up’ contest was over and all the participants were safely off the small drift course, the action segment of the event began.

In the past few years the weather has been ideal for participants (ranging from amateur to advanced) to slide around in their Skylines.

But this time around it was less than ideal. In fact, it was downright treacherous. As the rain continued to fall throughout the day, the water had nowhere to go and puddled up on the track.

This may have been good for tire consumption, but with the surface completely drenched, drivers found themselves struggling to keep control of their vehicles as they were hydroplaning all over the place.

It was only a matter of time before the inevitable started to happen; drivers coming in too hot would skate right off the track and into the dirt embankment.

It only got worse as the tandem battles started, and at this point I pretty much put the camera down and looked away – seeing so many four doors crashing was making my heartache. I guess that is the nature of the beast, though.

With the rain picking up, I decided to call it quits and head back before I caught a cold and got stuck in bumper-to-bumper traffic with all the people returning to Tokyo from their weekend excursions.

I left the event pretty soaked, but incredibly happy with the turn out and the inspiration gained from all the four-door ER34s that attended the event. 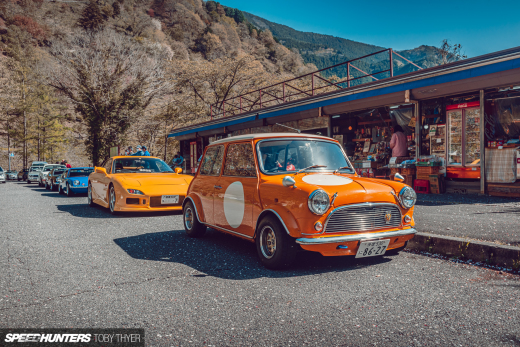 Some RB goodness! Nice to see

The female owned blue ER34 GTR homage is SO DOPE!

I do like the use of the subtle rear flare, rather than the actual GT-R box flare that the car above it integrated. At least to me, it looks more convincing as a theoretical factory design that works with having less quarter panel space.

I agree. The sedan looks much better without the GT-R box flare.

I second that David. The box flare to me looks like it points down too much at the front, the blue car is beautiful though. Feature please Ron!?!?

It really is. Love how it looks. If I end up bumping into her at another meet, I'll definitely ask ^^

Sweet! Pretty much the same scene here in MY, where GTR owners are treating their rides as investment piece/garage queen/nice parking object rather than taking them out to play. My ER34 tho wud see touge action at least 3-4 times in a month, just to serve the owner's addiction to burn the RS4 tyres connecting the car to the tarmac

Proud to say I'm in the small minority that prefers the 4 door over the 2. Just something about it's lines that does it for me. This does a lot of right! 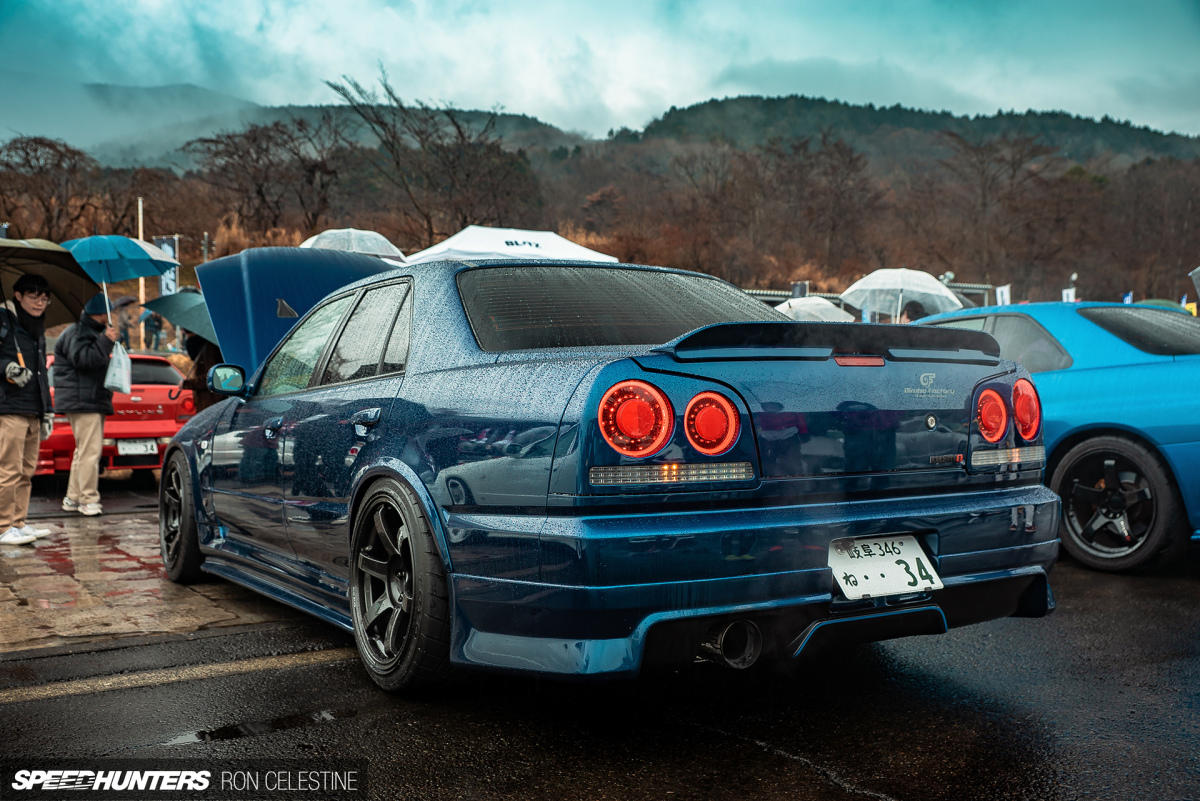