The Japanese really are masters of style. Approaching a big event like Slammed Society in Fuji definitely is quite the chore. Three days on and my legs are still aching from the non-stop squatting I had to do to capture close to every car that showed up. And when there are 400 impressively unique vehicles there before you, that’s a hell of a lot of squatting. Being selective is my usual plan of attack but…

…that quickly goes out the window at shows like this, I end up feeling guilty if I don’t at least try to shoot every car there. And how can’t you, when you come across stunning vintage cars like this Celica LB…

…or this X30 MarkII Grande on deep-dish BBS mesh wheels.

And of course like every Fatlace-organized show so far in Japan, variety is the name of the game, where oldschool meets…

…a variety of modern themes, an example being this Rocket Bunny 6666 Customs S13 that Miura-san brought up from Kyoto.

A big part of the USDM scene in Japan are of course Hondas, and on top of the slammed EG sedan from Car Craft Boom, aka Osaka JDM, in the opening shot…

…there sure was plenty to feast one’s eyes on…

…from most generations and body shapes.

The name of the game in this scene is to stand out, and owners will do everything to not only create something unique, but continue to evolve it, so that interest from onlookers never seizes.

One good example is Toshi’s RWB Rough rhythm, which if you recall I featured last year; his 993 now looks a little different, a little fresher since fitting a new set of reversed Work Meisters, which are sporting the extreme wide-look that Nakai is now going with all his new creations.

And while still at the Works Wheels display area I also came across this nice Toyota 86 which we first saw at the 86 Style show this past summer, again on a set of Meisters displaying the sort of stance that the 86 really craves. Functionality debates aside, it did look awesome sporting serious amounts of negative camber.

Work had a big lineup of cars on display, representing pretty much every style that they cater to like these more show-car driven Soarers, including a roof-chopped one!

I bumped into Miura-san of TRA Kyoto at the Enkei wheels display area, while he was chatting to Mark from Fatlace. With SEMA just around the corner everyone is waiting to see what the Fatlace FR-S will look like…oh and let’s not forget the first BenSopra kitted GT-R in the US. By the way, the girl in the picture is none other that “Bunny,” which would make Miura-san “Rocket!”

Wheel choice is fundamental on any modified car, but especially so on the rides that you see at events like these. It’s not only the model and color that is important, but size and offset is extremely critical in the pursuit of optimal stance. This Aristo…

…on top of the unique customization under the hood, was fitted with 19-inch Volk Racing TE37SLs, a superb choice for so many cars out there.

Some do go for unusual choices, but being different is good!

Of course terms like “stance” and “slammed” are very contextual, when used to describe cars like this carbon widebody Hosaka Tuning Factory R35 GT-R they refer to its obvious time-attack look.

And serving as a complete polar opposite is this Celsior literally sitting on the chassis’ floor!

…and I even came across what is quickly becoming a common sight on Speedhunters, this AE70 Corolla we saw at both the HachiRock Festa and the 86 Day Daikoku PA meeting.

Need more variety? How about Kei-cars on vintage rims…

…or Japan-only, awkwardly-styled, “either you love it or you hated it” sedans like this JZX110 Verossa.

While I still don’t get the whole roof-rack or “bicycle on roof” thing, I though this Golf diesel on display at the M Technica wheels stand was quite cool. VW’s popularity continues to grow.

The RWB guys ended up staying only until mid-afternoon; Nakai-san took off with his satin white Spearmint Rhino 993 convertible…

…and the others followed.

It was also cool to see “Rough Passion” for the “first” time. This 993 used to be Nakai’s own ride, the Royal Motegobay before it was renamed Tunerhaus. Following a very catchy respray from Nojima-san of Nojireal, the car has been literally transformed. What do you guys think? Like it?

I just can’t help but post at least a couple of more pictures of Kato-san’s C210. I mean, look at this thing!!

This is one of many more of Kato-san’s cars that I want to eventually feature. I was surprised to see the car was riding on air suspension, so while it might look beyond low, it can easily tackle any incline and cruised passed the curb to get into the show area…a place where half of the cars present bottomed out.

There is the roof rack again!

This is one of my favorite cars from the Nagoya area, the Common Snapper RB26-powered S30 Z. Ever since seeing this pearl white gem at my first Mooneyes show in Yokohama years back, I’ve wanted to shoot it and I think I might be getting my wish sometime this month.

Maybe the owner of this Fantasy Racing GX71 MarkII was hinting that he had removed the springs from his shakotan ride?

Since seeing this Z4 at Hellaflush Kansai I’m pretty sure it has been further lowered…and probably running more negative camber too. Not quite your hairdresser’s car any more…

Rocker Bunny + Volk Racing G25 is a recipe for utter awesomeness. And as you can probably imagine GReddy have some substance to back up those mean looks, not under the hood of this particular FR-S yet, but they have a turbocharged flat-4 currently being put through tests on their engine dyno. Can’t wait to see how much power they get out of it, will it be more or less than the soon to be released supercharger kit from HKS…?

I’ll stop here for now and leave you with a shot of this candy blue S15 mixing a drift look with Slammed Society approved stance. Check back soon for more from Fuji! 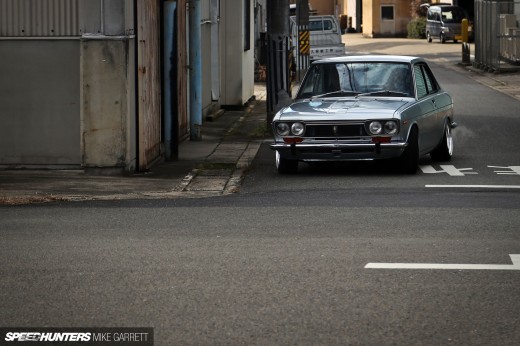 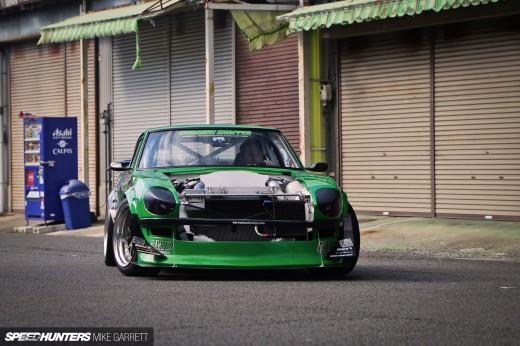 Nostalgic Attack: A 20B Turbo S30Z

The rims on that WRX are awesome!

@EthanGuzzi Is that not actually an R31? Definitely not an R32 though haha!

I beg you, upload that Rocket Bunny Scion in higher resolution!

i'm feeling that nakai-san's latest few rides, though still good looking, are just losing that "rough" feel that the early incarnations had

R31 with Impul grille, not an R30. You'd think someone who lives in Japan with an interest in Skylines would know things like this.

@BrandonMotteram dood, if you are talking about that blue wrx; I think those are Corvette rims. Super clean though.

Personally, I think the Corvette wheels look better on the Subaru than they ever have on a Corvette. I'm digging the white S30 and the red Celica Liftback. "Rough Passion" is the best-looking incarnation so far. I never liked the color of "Royal Motegobay". What I don't get about roof racks is that people tend to put them on cars that already have lots of storage space inside. One of my first cars back in the 80's was a MkI Golf/Rabbit, and it could easily hold an entire Marshall stack, four guitars, and a pedal-board. So a bicycle was no problem. I could see using a roof rack on a sedan or coupe to carry a kayak...

I like the RWB Porsche's. Very clean. And nice paint also.

Now that's the sort of new 86 i've personally been waiting to see!

oh wow RWB killing it as usual, love the widebody FR-S's's's's's showing up around the globe

@datsunsss headlights look like dr30 or r31 pintara ones. and yeah the rear looks like an r31. but still not sure lol.

the Rocket bunny kit is the reason I'm gonna buy a FR-S, GReddy is killing it.

Hey Dino, is there any way we could get the FR-S Rocket Bunny as a desk top???Please. Can't find it anywhere  on this site.

Desktop of the FRS in the other slammed society post. The one with a red FRS for the cover shot. Just for those looking and happen to read this post. And that car will be mine, one day.

@Censport I agree with putting a rack on a wagon makes no sense. I feel that the roof rack scene was started here in the PNW where we really do use our racks. They are very common. I think someone got the idea they look good on a car and it spread.

Hope you get to shoot that common snapper s30 Dino. Its build and execution is top notch.

"With SEMA just around the corner everyone is waiting to see what the Fatlace FR-S will look like…" Uh....it's gonna look like Miura san red 86? LOL.....very "fresh" I must say.....haha

Oh and for the record, Fatlace's BenSopra GT-R is not the first BenSopra build. There's a guy building one thru SP Engineering in SoCal that is ahead of the game.

Dino how could you say that z4s are hairdressers cars!? That's deffo Audi tt 1st gen!

g c styled c210, air suspension seems out of place right. I found that unappealing, although should be convenient

I need to go to one of these Hellaflush Japan meets.

I don't get how a Japanese car on Japanese wheels is considered USDM style?

yea my car is there

@FunctionFirst  Sorry if my standards are A BIT higher than yours.

@777 think that's because you get to see them about every day on these sites.

Superb rides, loving the ones with US plates, definitely a fresh thing for Japanese cars.