There’s a young couple in Santiago, Chile with an exclusive taste for Japanese cars of a particular brand: Nissan.

Valentina is the owner of a beautiful 1990 Nissan A31 Cefiro GTS-R – or Laurel Altima for our market – that’s been restored and improved over time. Daniel is the owner of an aggressive 1999 Nissan Silvia S15 Spec R that’s been set up for drift, taking him to more than one podium in local competitions.

Life is like a mountain road that has many curves, and one of those roads led to these two amazing people sharing their passion together. On a local track, Valentina learned skills in her A31 while Daniel tested out new configurations in his S15.

We could also say that these cars represent the pair very well; each has its own style, and although they are similar in several ways, at the same time they’re totally different.

Daniel has worked hard to bring his Silvia up to the spec it’s in today, importing the vast majority of components need to improve its drift-ability and visual appeal. The SR20DET up front is making around 320hp thanks to a Garrett GTX2860R turbocharger, large GReddy front-mount intercooler, DeatschWerks fuel pump and larger injectors, and a Nistune ECU.

Combined, the engine has an excellent throttle response and the power to move – all while retaining the original A/C setup for comfort.

The S15 is still running its original Spec-R 6-speed manual gearbox, but the driveline now benefits from a Nismo clutch and limited slip differential to get the power down to the ground as efficiently and reliably as possible.

Close attention has been paid to the suspension, steering and brake systems in order to to achieve total balance. Here you’ll finding Blitz coilovers, arms from Chile’s own Invova Garage and Tein, Parts Shop Max steering angle components, and polyurethane bushings throughout, plus a full Brembo brake package taken from an R33 GT-R.

The S15’s exterior combines style and aesthetics with function, the +55mm fenders providing plenty of room for a set of RAYS Volk Racing TE37SL wheels.

Daniel’s effort and dedication have led him to become a very technical and skilled driver. Knowing his vehicle 100% and learning to make the modifications by himself have played a big part in this.

Valentina‘s story is filled with emotion; her car has become a friend and at the same time allowed her to explore a new world.

“It took a lot of effort for me to raise the money to buy a rear-wheel drive car. It was my dream. Initially I wanted a Toyota Corolla KE70 or Datsun 510, until one day I saw the Nissan Cefiro for sale on Facebook and instantly fell in love with it,” Valentina says. “It has been four years since I bought the car, and he has been so trustworthy. I do not see him only as a car, but also as great company in good and bad times.”

This beautiful A31 features some small upgrades that make it stand out above the rest, including a URAS body and front lights, an Autech grille, and 18-inch Veilside Andrew Racing wheels.

In Chile, the A31 Laurel Altima was only sold with CA20 and RB24 engines, backed up with automatic transmissions. Valentina’s car runs the 2.4L engine but has been swapped to manual using a 200SX KA24 5-speed gearbox.

“With cars, Daniel and I complement each other very well,” says Valentina. “He tells me what modifications he wants to make and asks for my opinion; I also let him know if his car is behaving strangely, and help him solve the problems that may exist. In drifting, it helps a lot watching from outside, and I can see the car’s weaknesses. Then we talk and work on it to improve the driving more and more. I also accompany him to competitions and practices because I love to support him. Daniel has really helped me with my car too, as the A31 is very similar to his other car – an S13 200SX.”

More than just cars and drifting, Daniel has helped Valentina overcome her fears. “A long time ago I suffered a vehicle accident, which made it very difficult for me to have the confidence to drive again. Daniel guided me, supported me, and motivated me to lose fear. I knew that my biggest dream was to be able to get to the track and actively participate, and without telling him this he knew it and he didn’t give up until he managed to see me there, fulfilling my great dream. ” 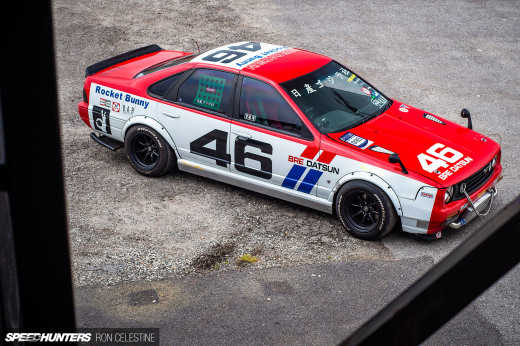 Cool article, but I guess due to regulations the registered cars in Chile have to be LHD converted?!

Yes but if the car will be from a collection or a museum piece you can stay with a steering wheel on the right. There's a GT-R R34 V-spec II with a right-hand drive.