What do we know about Finland?

This country is home to more successful rally drivers than I could ever account for, has many famous F1 stars, and enjoys a huge fanbase for old American muscle cars. In one word, Finns are passionate about cars, and the Speedhooked Pitstop is a prime example of this.

Roni Collin and Tomi Salminen are the names behind the venture, a place for enthusiasts to come together and enjoy the car lifestyle. The Pitstop provides facilities to host events of all kinds: cars and coffee, car club meets, and days like the recent collaboration with CDLC.

Before it was transformed into the Speedhooked Pitstop, this place just outside the city of Porvoo was an automotive service center.

The renovation of the main building, which was originally built in 1975, has been done with respect for the details common to its era. When you mix up the architecture with special cars, you get a unique experience.

The whole facility is huge, but currently only one of its seven buildings is fully restored and functional. There’s a showcase area, a pitstop, a car wash, a car dealership and a restaurant, but so much more will be added in years to come. One idea is to rent out small single ‘man cave’ garages, where people can store and work on their own cars.

Did I mention that it even has a small drift course that will be put to test really soon? It’s pretty cool.

When I visited, there were some really interesting cars on display. This Audi Sport quattro S1 Evo 2 replica was bought from Sweden already fitted with carbon-Kevlar bodywork and some race-ready parts. The plan is to fill it with high-end tech, and then to drive it hard.

As it sat there was no engine, but I’m told there’s a 2.5L five-cylinder unit capable of 1,000hp waiting to go in and be connected up to the sequential gearbox that’s already in place.

Next to it was a DTM-inspired Audi sedan built by the guys a few years back. This street car runs a 3.6L V8 with rare 6-speed manual, and has been stripped out and caged.

The 16-inch to 18-inch custom-stepped BBS RS wheels, low static ride height and racing livery ensure that it turn heads wherever it goes.

Longtime readers will be familiar with this BMW; the 2002 had a lengthy feature right here back in 2015. It ranks as one of my favorite engine-swapped cars of all time: a classic BMW chassis with the high-revving heart from a Honda S2000.

A Lancia Delta HF Integrale Evo 2 really doesn’t need any introduction. Although it’s mechanically stock, this one is rocking a Martini Racing livery, turbofans, and other rally-style details.

Finns go mad for Lancias, mostly because their own Juha Kankkunen drove the Delta chassis to two World Rally Championship titles (1987 and 1991).

In the car wash I spotted another Audi, this time a rare S2 – one of 40 built by ABT – that was purchased in Sweden (Roni used to import cars from there as a job in the early 2000s).

The Lamborghini Gallardo LP560/4 has been upgraded with a custom interior, roll cage, a crazy-sounding custom exhaust, and carbon GT3 body parts. Roni owned this one himself a few years back.

The Speedhooked Pitstop is open everyday, so whenever I venture to this area of Finland in the future I’ll be sure to stop by and see what’s new. If you’re ever in the neighborhood, you should too.

The SpeedHooked Meet: Back At It In Finland 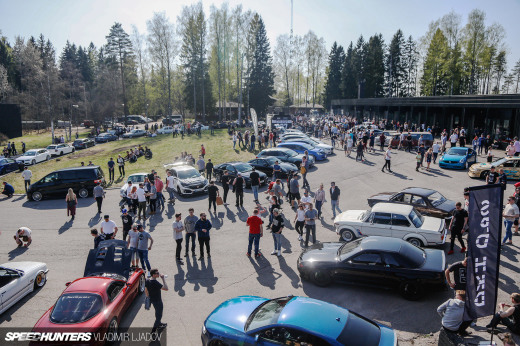 This is so sick

Every country should have a car haven like this

someone needs to make me be "in the area" so i can see this insane place...

this is so cool! Thanks for that!

That Audi 90 tho! There's something about a race-prepped midsize sedan.

This is an V8 tho

Wow! I am speechless. This place is amazing! OMG! Lease get to New Jersey and check out Top Gear in Saddle Brook! A lot like this place in Sweden.

This place is in Finland.

Looks cool and a fun place for events, but surprised there is apparently no actual garage and workshop there?

I love that these clubhouse spaces are popping up all over. They do really cool things for local car scenes. M1 Concourse in the Detroit area has been great for everyone, even if you don't have a shop there or track at their course.