SHARE Back In The Usa: The Speedhunters Do Irwindale

As exciting as it’s been to witness the expansion of Speedhunters this year, I couldn’t help but feeling a bit left out when it comes to the big events.  Sure it was great fun to read the tales from those amazing events in Europe, but I’ve been patiently awaiting for the USA to get the full scale Speedhunters treatment this year.

There was Gatebil, there was Spa, there was Silverstone, and now there’s Irwindale. The wait is over.

The center of the action is of course Irwindale Speedway and the final round of the 2012 Formula Drift Championship. Larry Chen already shared some of the day’s qualifying action, but for now I’d like to quickly share a few impressions from the front lines of the Speedhunters American invasion.

I’m sure the European Speedhunters contingent was expecting to be greeted with typical beautiful SoCal weather when they arrived at LAX, but instead this what they saw. Fortunately the freak rain storms that have been hanging around LA the last couple days have now moved away. Saturday’s weather is supposed to be very pleasant.

Much of today was spent doing final preparations on the Speedhunters booth. We’ve assembled a pretty cool collection of machines to be displayed in the booth this weekend – most of which will look familiar to Speedhunters readers.

Among the feature cars we’ve gathered in the booth are the Bisimoto Porsche and its mind blowing turbo setup.

The Rustbucket Civic Wagovan is also making an appearance in Irwindale this weekend. The little Honda was driven in today from Phoenix Arizona, a  five hour road trip that began at three in the morning How’s that for dedication?

Lloyd also cruised over in his Zombie Toyota Cressida, adding some proper Shakotan flavor to the lineup. On Saturday it will be joined by yet another recent feature car – Jon Sibal’s Dodge Challenger.

If that wasn’t enough, we’ve also added a pair of proper exotics. Just for good measure you know. You can just sense that this Lamborghini Aventador and the McLaren MP4-12C parked alongside are giving each other dirty looks…

I do believe we are the first group of maniacs to proudly display a rust-covered Honda Civic from the 1980s a few feet away from a brand new Lamborghini. So far it seems to be a toss-up in terms of which car is getting more attention…

With so much to do, members of the Speedhunters crew found themselves doing things they aren’t quite accustomed to. Sean Klingelhoefer for example was put to work as an auto detailer, which he seems quite excited about it.

Speaking of Mad Mike, there he is chatting with James and Lloyd about some of the crazy work done to the Honda. Sure he may be an internationally recognized pro drifter, but the guy is just as curious and excited about “normal” cars as any one of us.

This event also marks the return of DJ Miki Taka who will be supplying hip tunes and giving out Speedhunters swag all weekend with the help of her old partner in crime, Courtney Day.

Miki and Courtney are being joined this weekend by the lovely Camille Sebaoui, who’s actually visiting the United States for the very first time. I’ll certainly be interested to hear her impressions on the event during her guest blog next week.

There’s James adding one of the latest Speedhunters sticker designs the rear of the Wagovan. I don’t think I’ve ever seen more Speedhunters stickers in one place, so if you’re at the event this weekend be sure to come by and check them out. Who knows what you’ll get?

Of course we also have the full line of Speedhunters EDTN merchandise available for purchase in the booth. In addition, we have an extremely limited number of copies of the Speedhunters Volume One photo book available this weekend. I believe these things are just about sold out online, so this may be one of your last chances to pick one up. Saturday evening we will even be holding a book signing with all of the present contributors. Now I need just need to learn how to sign an autograph…

In addition to all this, we are also running a couple of cool social activities at Irwindale this weekend. First we have the #IAMTHESPEEDHUNTER program, where we are asking attendees to shoot cool photos at the event and post them to Instagram using the #IAMTHESPEEDHUNTER hashtag. We will choose our favorites and hand out swag to the shooters.

The photographers of the shots we REALLY like can even score themselves a copy of the Speedhunters book. We gave away one book this evening and have two more to give out on Saturday so please join in if you happen to be at the event.

On Saturday we will also running our #FEATURETHIS program at Irwindale, in which Sean will be doing a full shoot on one outstanding machine selected from the Slammed Society Showcase. You can read more about that here.

With that it’s time for me to sign off and get some sleep as we have another action-packed day ahead of us.

We have much more from Irwindale on the way, and if you are lucky enough to be here this weekend please do drop by and say hi! 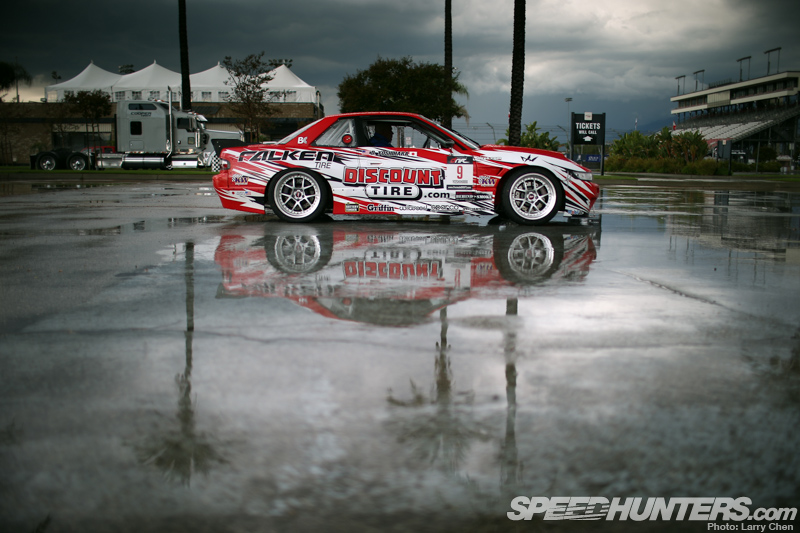 Reflecting On The Formula Drift Finals

Books are sold out. I was very upset when I attempted to place my order last night once I realized I forgot to add it to my hoodie order a few days ago. I'm crying.... a lot. If you have any left over after the event, I will kill any 3 people you want for one.

Very nice car, thanks for the information.
Anna @ http://griyamobilkita.webs.com

@majik16106 LOL, you always have the best responses.

Rusty civic attempting to be a show car? Looks to me like he can't afford: A. A real car and B. A paint job.

Will we be able to purchase that green speedhunters sticker on the wagovan soon?

@Lastspark The owner stripped the bodywork to bare metal and purposely allowed it to rust. By your definition, Rat Rod owners can't afford paint jobs either. If you read the feature on the car, the amount of work and effort put into that Civic adds up to a lot more than the work put into other "flashier" cars.
The term "real car" is subjective. I think any car with work, time, and effort put into it is a real car. That Civic is more "real" than the Aventador sitting next to it; any asshole with money to burn can buy a Lamborghini and show it off. This may come as a surprise to you, but not everyone blindly dislikes a certain car because it's the 'popular' thing to do.

@Lastspark Real car? What do you consider?

Lovin the rustbucket! Something different from the everyday spit and shine.

@Lastspark oh mann! haha, that was a funny joke!... wait.. that was a joke right?

Looks like too much fun, wish I could be there!

Is SH going to pay for Sean's manicure after all the car detailing?

@Lastspark He chose a theme and saw it through.  You don't have to like it.

You need to say "swag" more in this post. And dont limit yourself to one "trending" word. Feel free to use intentionally dated terms like; gnarly, radical and bodacious, to show just how post modern you really are. It will help add integrity and class to the article. All while enhancing the professionalism of the site.

@Absolution I do my best. Hopefully one day Ill be able to give more to the community than silly post responses. If only I were taking all this pent up personality and putting it towards..say.. a youtube tv show about cars.....

@Lastspark "any asshole with money to burn can buy a Lamborghini"? LOL....you're telling me the owner of this Aventador is an asshole? You know him personally? I don't know the dude, but one thing is for sure; he has taste and I'm pretty sure he has a really great job to afford such an exotic......oh wait, or maybe you're just jealous?

@JDMized  @Lastspark honestly? Hell yea I'm jealous of the Lamborghini, but I'm more jealous of the civic owner. I bet he's way more proud of his car than many other people have the right to be. and yes, jdmized, and asshole with money CAN buy a lamborghini. that was a true statement.

@KeithCharvonia  Do you ever go to the car show at Pavillions? I'd love to meet you and see your car in person sometime. I'm local, over on the west side of town.

@JDMized  As cool as the Lamborghini is, I don't get jealous of people who own high dollar supercars. I just used the word asshole to describe any random guy. I said it because I thought it would have a better effect, not to specifically describe a particular person. Sorry If I offended you.

@Lastspark Comments like this is why Speedhunters needs a dislike button.

No disrespect, but how old is Mad Mike??

I got three new Speedhunter stickers from the IAmTheSpeedhunter thing but the only problem is that, out of the three that I got, two of them were glittery. Eww.... glitter.

I was upset that I ordered a book online the morning they were released and still havent received it.....  Missed out on all the signatures that I wanted to get at Irwindale.

@LouisYio You can send m over here if you want, I'll pay for the postage

+1 to the Rustbucket! Awesome. And man is that Porsche gorgeous too.

@robzor I'll probably be out there the weekends of Goodguys and Barrett Jackson, those are always big days.  Otherwise I do get out there more in the fall when the weather is nice.  If you see the car come track me down.

they dont look too bad once to stick them down!

i want that windbreaker that camille was wearing!!

@JDMized You didn't offend me at all. I don't get offended when people insult on on the net.....it happens everyday....LOL
I pointed out because you actually don't know the dude. You can call him whatever.....
But the fact that he has money to spend into a brand new Lamborghini....it says a lot about his life style.
Whereas the guy that built the rusted Civic.....you can't really put in into any boxes.....the dude just wants to be different.

@JDMized You didn't offend me at all. I don't get offended when people insult on on the net.....it happens everyday....LOL
I pointed out because you actually don't know the dude. You can call him whatever.....
But the fact that he has money to spend into a brand new Lamborghini....it says a lot about his life style.
Whereas the guy that built the rusted Civic.....you can't really put in into any boxes.....the dude just wants to be different.

Mike and Camille in the same area together? Wow...

@majik16106 To you, or anyone else, I have a few hundred copies of the Speedhunters yearbook for sale (I'm the publisher, Stance & Speed. My logo is up there on the right-hand column.

where can i get that sick windbreaker?