It’s a topic we’ve covered ad nauseam, and not one which I think we ever need to go into in any meaningful way again. If you missed the past discussions, I think we narrowed it down to two things: The first, is that wide-bodies are infinitely more impressive in person than they are on the internet, or in photographs and videos. The second, is that if your car is going to look so aggressive, then it better be prepared to back it up.

This isn’t David’s first rodeo, and he’s most certainly someone who knows how these things should work. We previously featured his 500+hp 2JZ-powered Rocket Bunny S15, and this R32 follows a similar recipe: If it isn’t broke, don’t fix it and all that.

One of the more appealing details for some will be that this car started life as an RB20DET-powered Skyline GTS-t. I’m not one who would be ‘outraged’ if David had actually cut up a GT-R for this project, but I think there’s something enjoyable still about taking a model from lower in the Skyline range and turning it into something as impressive as this.

I had been trying to arrange this shoot with David for a while, but with the whole coronavirus thing it took a little longer than expected. David did use that lockdown time productively though, and evolved the car even further.

By the time I heard the distinct sound of anti-lag driving down the opposite quayside on its way to our shoot, the car was arguably in its ultimate form.

So, what exactly are you looking at?

I’ll start with the obvious: It’s a 1991 Nissan Skyline GTS-t imported into Ireland from Japan, something common amongst the vast majority of performance Japanese cars in this country. The fact the we share the same side of the car and road as Japan goes a long way in this regard.

The car is fitted with an original Pandem kit, which has been fitted over genuine GT-R front fenders and side skirts. The front bumper is a real GT-R item as well.

A bodywork specialist by trade, I’m sure David’s choice to pick up a car with an original GT-R front end wasn’t by accident. The car was previously black, but has been changed to the red you see now, and also features tubbed front arches and a smoothed engine bay.

Sitting on BC Racing coilovers, the body is suspended over new Work VS-XX wheels in 18×10.5-inch -27 (front) and 18×11.5-inch -32 (rear). Adjustable camber arms and front tension rods are the bulk of the suspension upgrades, otherwise.

Behind the front wheels are Brembo 18Z calipers, sourced from an Audi Q7, with a twin calliper brake setup on the rear.

The car remains rear-wheel drive, but uses a GT-R differential housing with GT-R driveshafts being turned by a Nismo 2-way limited slip differential with a 5.1 final drive. A recently rebuilt RB25 gearbox, generally renowned for their strength, has also been used along with an OS Giken twin-plate clutch.

Remember how I wrote earlier that a car which looks as aggressive as this better be prepared to back it up? There’s no questioning that this is the case here. The RB20DET is long gone, and in its place a single-turbo RB27 producing a dyno-proven 582hp.

The 2.7-litres of capacity comes from an RB26 bottom end with oversized CP forged pistons, while up top is a fully-built RB25 cylinder head featuring HKS 272-degree camshafts and solid lifters.

The boost-maker is a Garrett GT3582 turbocharger with modified internals for quicker spool, mounted to a 6Boost manifold. The exhaust system is custom, as is the screamer pipe attached to the TiAL wastegate, which exits directly through the painted carbon fibre bonnet.

A Sard Racing fuel rail and fuel pressure regulator along with 1,000cc injectors are some of the fuel system highlights. There’s also a Greddy intake manifold.

Underneath the RB26 covers are R8 coil packs with a custom loom. Oil cooling is in the form of a custom twin oil cooler setup, while water temperatures are taken care of with a custom radiator.

A Link ECU controls everything, with a Blitz Dual SBC boost controller allowing David to adjust the level of absurdity. As an aside, I had forgotten how ignorant proper anti-lag is in a road car. This isn’t some VAG tuner ‘crackle’ map, but full blown, functioning anti-lag which can be enabled and disabled by a switch beside the boost controller.

‘Obnoxious’ is probably the most polite way I can describe its use. Obviously, this is fantastic.

The interior remains functional, with pretty much the expected level of safety and convenience upgrades. The Safety Devices roll cage has been welded in, but the door bars remain removable. There’s a full fire suppression system, and the battery has been relocated to the boot.

Information is relayed to the driver via an AiM digital dashboard, with the touch points comprising of a Blaze shifter, Group D hydraulic handbrake, and a Momo steering wheel. A pair of Sparco Pro2000 seats are matched with Sparco harnesses.

One of the subtle details I originally overlooked were the body-coloured wind deflectors. This is surprising, as I enjoy a good wind deflector, but I suppose this is testament to their subtlety.

Unfortunately, it was probably the windiest day of the year, so any attempts to record a video of the car in action were a spectacular failure. Thankfully though, our friends at Drift Games put out a video on the very same car.

This isn’t a build that needs any sort of justification. It should be obvious to anyone that it’s a car built to be enjoyed. It’s not a perfect show car or anything, and I’m sure you could point out flaws if you want, but then it wasn’t built to be one.

While people might nitpick things here and there, I’m sure David won’t be able to hear them over the hard-cut rev limiter. 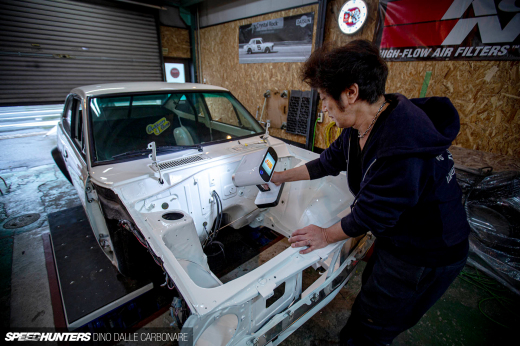 I'm glad there were all those pictures because it's a sweet car and I wanted to see more of it, but one of my cardinal rules is that I don't watch YouTube videos with sensationalistic thumbnails.

I can't really argue with that TBH, but it's just what people have to do on YT now.

When the city is on lockdown, it sure makes a great time to do photoshoots. Everything looks surreal because the streets are so empty.

And this car sure has dollops of "subtlety". I didn't even notice the screamer pipe until I saw the engine bay pictures.

It's surprisingly subtle all things considered.

Big shoutout to the really nice security people who allowed us to photograph there and were super enthusiastic about the car!

R32 GTRs are just epic , sorry, IDC what anyone else thinks of them

I don't think many will disagree with you. I certainly won't. Also, this isn't a GT-R.

GTST?? My mistake , thanks for pointing it out , totally forgot about the RB20DET after reading about the swap and other modifications he has done to the engine

Does it have proper anti-lag? With a throttle bypass valve etc etc, or is it just the ignition fuel dump type style?

Going off of the complete lack of any pipe work for a proper anti lag set up, it's not running actual anti lag.

There's a few different ways to reduce lag, are you referring to an air injection system?

All of them require extra pipe work of some kind. I'm not seeing it in any of the engine bay pics or in the video, which is why I'm not convinced it has actual an anti lag system.
It has become quite common for people to misname a two step rev limiter or a "pop and bang" map as anti lag, so I don't know if that mistake has been made by the owner or not.

Fair assumption, but you can't see the exhaust manifold either, and it has one of them

It's definitely not a 'pop and bang' or 'crackle' map, it does have anti-lag. I'll see if I have any better images or get some from David.

You can see that turbo isn't just magically floating though :D.
I'd be happy to be proven wrong, as actual anti lag becoming a thing on street cars would be awesome.

definitely the Perfect R32. Its RED, each part that was picked to make it as a whole.

Not much point in having the car geared for the moon with our narrow and twisting roads.

Excuse my ignorance, but my understanding is that it is geared for some serious acceleration and it is thus far from fuel efficient even when cruising on a highway, if ever. The latter probably doesn't concern the owner given the nature of the build - it's just a means to clarify my understanding (or lack).

seems a bit ridiculous eh, must be a huge pain in the ass to drive basically everywhere

Yeah, I'd imagine you'd be shifting real quick to keep the revs low in traffic...

Very cool, reminds me of some US builds, pretty impressive to see on Irish plates. Although I have to say I'm skeptical about the benefit of the thick end of 600hp through the rear tyres in Ireland's permanently-saturated environment; it seems to me that ATTESA would be especially valuable there.

What I really like is the way the kit has larger-diameter wheelarches, by cutting higher up into the wings it makes the whole car look visually lighter and more agile, very much the JGTC look. Fantastic stuff, thanks for the article!

It's not -always- saturated, I say after pretty much six weeks of non-stop rain in the 'summer'.

Just wonderful, as are the pictures Paddy.

Thank you, was a tough shoot to colour grade with the mix of direct sun / shade on red paint.

The R32 is THE Godzilla in my opinion.

Somehow Nissan managed to produce a car that remains good looking and iconic over the years .

Usually I prefer not too much work done to the car but this car takes the cake, hands down the most beautiful R32 out there and the paint makes the thumbnail legit. THE perfect R32.