If you were disappointed in my lack of attention towards the two-wheeled machines at Southern California’s Japanese Classic Car Show last weekend, I’ll make it up to you right now.

Modifying bikes is by no means anything new, and it came as no surprise that dozens of awesome motorcycles made it out to JCCS in Long Beach. As expected, many of them were restorations and survivors rather than all-out builds, but all were well received. I personally don’t have much time logged on two wheels, maybe 10 or 12 hours max, but it doesn’t take much to fall in love with the experience.

There’s just something about 12,000rpm coupled with no structure protection that really makes you feel alive at any speed. And while they’re perhaps not quite modifiable the same way cars are, there’s still endless potential for customization.

What these bikes lack in terms of canvas space they more than make up for in cohesive style. With all the parts out in plain view there’s no hiding imperfections or defects, either. From the engine itself to the suspension and on up to the fairings, it’s all right there for you to see.

Even though the show is, obviously, Japanese-only, there was no shortage of variety on display. There were bikes like this funky little 55cc C105 ‘Dealers Special’ which is all-original and completely unrestored.

At the same time, you also had crotch rocket restoration projects like this ’82 homologation special CB1100R. It featured exotic materials like titanium and magnesium, which made it quite sexy for a street bike in the early 1980s.

Even outside the designated motorcycle area you were bound to come across something special with two wheels. I’m really glad to see a continued appreciation for bikes at JCCS.

There was one motorcycle in particular that really stole my attention, and it should come as no surprise which one it was. While it was built here in Southern California, Patrick’s ’79 Suzuki GS750E is the closest thing to true bosozoku bike style I’ve ever come across.

After many trips to Japan, Patrick knew what he wanted to do. With all of the fairings imported and the custom seat built, he set to work painting it up himself.

He described the bike as “a total mess” when he got his hands on it, as the Suzuki had been sitting for over 15 years at the side of his boss’ house. Looking at it now, you’d never know. Not personally having much reference for a proper bosozoku build, it’s cool to see details like the six-trumpet horn and other odds and ends that found their way onto the bike.

Then there’s the iconic seat back – the bigger, the better. It must have been indescribably incredible when groups of hundreds of riders would take over Japanese roads with their seats swerving back and forth through the air (and traffic). There’s some footage floating around online, but none of us will ever really know what it was actually like.

Throughout the show I kept coming back to Patrick’s GS750E. It is, no doubt, the epitome of Japan’s classic and custom style now found here in California.

And although the Suzuki stole the bike side of the show for me, there were plenty of other quality two-wheel creations out on the Marina Green. From modified scooters to a wild two-stroke, four-cylinder Yamaha RZ500, the Japanese Classic Car Show had a little bit of everything. Make sure to enjoy it all in the gallery below.

There’s something special about the two-wheel experience and I’ll have to make it a point to feature some more motorcycles here soon.

The Best Of The Rest
ADVERTISEMENT 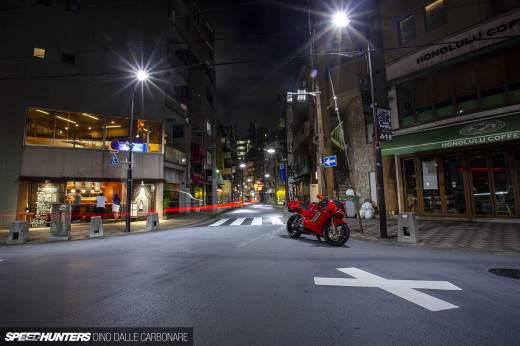 The cb1100r reminds me of my uncle's bike. I should take some pics of it. He had it bored out and a few other mods.

For the Speedhunters in Japan - Taste Of Tsukuba (effectively Idlers games for bikes), and some of the Street Racers are still out there. Tracks like HSR, SLY and little club circuits are dripping with 90's JDM rocketships. Check out on IG @rt.bomber.03.ganma or @mittakasan

Somebody know where i can get some of those Kerker exhausts for the Kawasaki z1000 ?

RZ500's are a seriously moistening machine. Japan 2-strokes are my weakness. Nice.

It's a monster bike.

I love that you guys are featuring bikes here and there! I enjoy the Japanese bikes and culture, however, I'd like to see you guys do a feature on some old school choppers!

I've got you covered! Just need to find the time to write the story...so maybe sometime in November

Title is a surprise to be sure, but a welcome one...

"There’s just something about 12,000rpm coupled with no structure protection that really makes you feel alive at any speed"
That's the best was to describe it (specially if it's a 2-stroke super bike) and that's why a regular "small bike" rider feels all cars are slow let alone a super bike rider.