Ah, yes, the mighty Suzuki Cappuccino. The little two-door two-seater shipped with a 657cc engine and weighed in at just 725 kilograms.

A nimble kei car for sure, but not exactly a track monster. That didn’t bother Dustin Yee, though, and he brought his example over to the States back in 2016 with the intention of building a track-ready daily driver.

Dimensionally speaking, it’s an impressive little thing. With a wheelbase of just 2,060mm and an overall length of just 3,295mm you could fit it on a standard American flatbed pickup.

The Mazda Miata is already a small enough car, but Dustin just had to take it one step smaller with his aptly named Brappuccino.

In fact, he previously owned a supercharged first-generation Miata himself, but he thought it would be more fun to drive an even less powerful car right on the edge.

Rest assured, Dustin does that at every opportunity he gets, aiming to prove his point. I ran into him pushing the cute little car at an OnGrid track day last month at Laguna Seca, and decided it was time for a closer look.

Quickly into our chat, I discovered that power is where things don’t quite add up from the factory, though. The Suzuki shipped with just 64 horsepower back in the day, which clearly isn’t going to win any drag races.

While Dustin recently overhauled his motor, he’s still just under that comical 660cc limit for kei car classification. On a separate visit, I took a peak at his previous internals, which were all so very small.

Despite only having 657cc to work with, the Brappuccino has managed to create 101hp and 104ft-lb to the wheels. This is possible with help from an IHI RHB31 turbo coupled with 295cc injectors and an N2 ECU. The setup pushes 1.2bar (17.6psi), ultimately maxing out the potential of the tiny block.

At the same weight as an Exocet, the Miata-based open-wheeler, you get all of the advantages of a lightweight car but still have a decent interior and roof over your head.

Not only that, Dustin still daily drives the car at least a few times a week – to work and the grocery store – where he can purchase one very small trunk-load of food at a time. Quite practical, really.

No matter where he is, the Suzuki gets plenty of attention. You can follow his small car shenanigans on Instagram if you so desire. 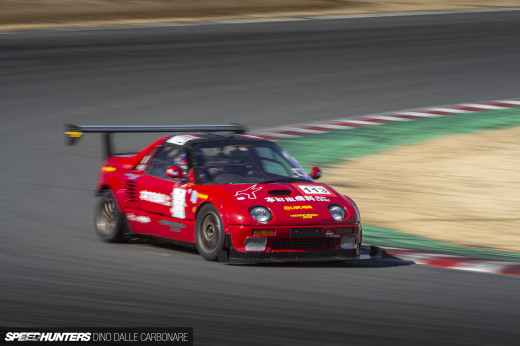 The Little Red Kei Car That Could

i'd also say a 2 stroke bike can brap

When I heard brappuccino, I thought rotary swapped cappuccino.

What a ruse! Calling this car a Brappuccino and it not having an LS under the hood! Shame on you!

Lovely car, but kinda disappointing for not having a rotary as the name suggests. Is that slated for the future or something?

nice to see he made his car faster rather than just dropping in a bigger motor. quite the rarity these days on the webs.

No rotary, no brap.

Really nice that he kept the little three cylinder! A Cappuccino is always nice, but this one is even better. (But it's not -that- short

Brap - made me think bike engine like 1000cc gixxer

Can I fit in one? I'm 6'4". Currently have an NA Miata and I don't have much room left to work with. Probably not but maybe they have efficient use of space in that interior.

This. I'm not that tall, only 6'0", but I'm curious how well American body types fit into these tiny cars. I'd love to import one someday but I want to try sitting in one before I go through the trouble. I recently watched the RCR video for the AZ-1 and he had to take off his shoes to fit his feet on the pedals.

You really don't lol.. I'm 6'1 and my friend has attempted to let me drive his here in Japan. My legs are a bit longer than normal so there really lies the problem. With custom seats / rails, you MIGHT be able to fit. Comfortably is debatable tho x.c

Sucks being over 6' tall trying to fit into older Japanese cars. I'm 6'4" and I cant really fit into S2000s, RX7s, NSX ect let alone kei cars. Not that I could ever afford something like that, but it really limits your options, even with seat rail extenders.

Yeaaaaaa.. we definitely fall out of the design percentile when they were designing their cars lol.. *sigh*

Lol that's because they were designed for 'Merikans in mind.

Hey, I didn't name the thing...and it still braps with the tiny three-banger. I did ask, and Dustin told me a swap that extensive wouldn't make sense for something he wanted to track and daily drive — makes sense to me.

This. I own a Suzuki Swift with a G13B and it's an absolute monster of an engine. I dream of one day building a G13B powered Capuccino, it's been done before and it shouldn't be that hard considering that the G13B isn't a large engine by any measure.

On stock internals and cams, a G13B is able to deliver close to 450whp...in an asburdely light and rev-happy 1300cc all-aluminium package. Now put that in a comically small, rear wheel-driven chassis...

Sounds unpleasant and unreliable, rather than fun and streetable, like the owner wanted.

Yikes, my mistake! Thought you meant a Suzuki G13B engine instead of a Mazda 13B rotary. Duh, sorry!

rotary or GTFO...or rename it you troll

Nice article! I love Cappuccinos and I'm lucky enough to drive them in the mountains for a living... I have a couple for sale right now if anyone want one

I was waiting for the rotary swap

Would no longer be a kei car with a rotary swap. I can confirm it braps in its own way