When you nail details people take notice, and there were no shortage of Speedhunters readers who had their interests piqued by a certain Fox Body Mustang featured in my first post from the SEMA Show floor last week. One reader asked me to go back and spotlight the car, which I did, and now that I’ve recovered from a crazy week of Speedhunting in Las Vegas, I’m ready to share it.

With so many cars on show at SEMA, it’s an extremely tough ask to see them all, let alone go back for a second look. But every time I walked past the ‘Goodguys Pace Car’ on my travels (it had prime thoroughfare positioning in the busiest hall at the Las Vegas Convention Center), I was drawn in for another walk-around.

I kept thinking how damn good it looked, and not because it’s a replica of an 1979 favorite that made its mark in American car culture, but because it was executed so perfectly.

You see, up until last week I didn’t even know what a 1979 Indy 500 Pace Car Mustang was; I grew up on the other side of the world and had other influences in my young years as an up-and-coming car nerd.

What I can tell you, however, is that when you take a close to 40-year-old car and transform it into something that oozes presence, people will take notice, no matter where their love lies.

With this build, the Goodguys Rod & Custom Association have shown everyone how you’re supposed to do fender flares: you form them from metal and then integrate them into the body work. All of this work was entrusted to Goolsby Customs with famed custom car designer Eric Brockmeyer tasked with the design aspect.

And no car at SEMA could possibly give a sense of aggression outside without backing it up with something worthy under the hood, a raised and vented one in this case.

The power runs through a Tremec T56 6-speed and out to massively wide 345/30R19 Michelins that wrap around 19×12-inch Forgeline center-lock wheels at the rear. And back here we have an even wider interpretation of the front fender flares.

The interior looks so simple and well laid out that you may start to assume that not much work went into it, but such an assumption would be very wrong. Under the skin this thing runs a full Roadster Shop Fast Track chassis and mini tubs – the factory unibody is no more.

The whole point of this car was to make the announcement that as of 2018, Goodguys car events and shows are now open to cars from 1984 and earlier. It’s a point very well made, don’t you think? 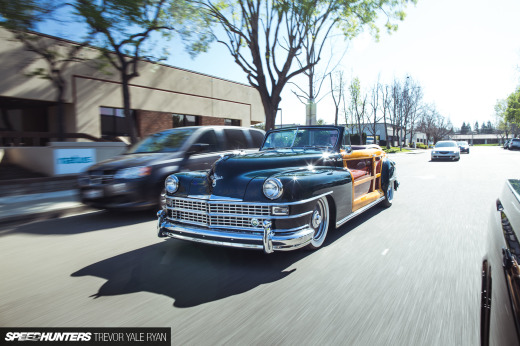 A Viper V10 Goes Back In Time

The car looks brilliant, I love the way that engine bay looks and the rims are a great choice. Question: is it on bags?

no, even in that last photo you can see it's on the carpet.

There's a black bag stuffed below the rear valance.

I've never really liked the front of the pre-87 cars, but this car has changed my mind...looks great!

oh my GOD this thing is stunning!! early fox bodies are so sexy, great to see one done up this well and given the attention it deserves. The guys over at foureyedpride.com will love this one.

I was never a fan of the fox body Mustang but when done right damn it looks good.
Beautiful creation from the Goodguys. I really need to go to SEMA one year such amazing vehicles and the coverage Speedhunters has provided has got me dribbling!!!

1) Some guy in town here has a fox body pace car. Has a different livery than this one though
2) "With this build, the Goodguys Rod & Custom Association have shown everyone how you’re supposed to do fender flares: you form them from metal and then integrate them into the body work." Lol this is very telling of your opinion on the current crop of flares.
3) Does this car need the flares? Looks like it could tuck those wheels even without the added width.

Sweet ride though love the headlights, keep the features comin'!

How common are crate motor swaps outside of the muscle scene? I feel like every time I hear the term it's about a v8 resto. Are smaller displacement crate engines popular in other enthusiast/pro circles, or just your typical swaps? I honestly don't know.

Coyote swaps are becoming increasingly more common for pre-2011 Mustangs. Ford makes an entire engine control pack that can be bought separately in order to make the swap as "plug and play" as possible.

Oh yes, yes, YES. So much charisma. You just don't see these done to this level.
I noticed it in your earlier post and it was in my head for days, literally, days afterwards.

It looks like a living rendering, I can practically see the marker sweeps. What an absolute knockout.

Stunning set of images Dino.
Can I ask what camera and lens you used for these.

I wanted to hate this...but boy I love it. It's a beautiful balance of retro styling and modern touches. That satin paint throughout.

Very nice, but not as nice as the SINIS Mustang.

Says my vote has been adopted (odd) so I will manually + 1 this.

Cool reason for doing it though, to denote a broader year range, good on Good Guys.

Great write-up on a great build! I was never a big fan of Fox body Mustang's growing up but the older I get, the more I am starting to appreciate the design.

Alright, this is pretty nice. I can't even crack on it for being too low because it just plain looks so nice.

I do have to agree on the flares; it's nice to see some that are molded into the fenders rather than riveted on.

surprised it didnt hit any crowd

I wish we we got fox body mustangs in Australia

Good news; You did! Only a few, and only facelift 87-93 cars. But they are genuine right hand drive Australian market cars.
Might find one if you are lucky!

That is the business! Slap a turbo on it, and it would be nigh-on perfect!

Such a sweet looking build, stoked to see it stayed Ford powered as well. In a world of LS swaps it's refreshing seeing something different.

i like it but i would have liked to see the flares like the ones from the 80's IMSA race cars.

Awesome build! Glad they went with coyote power. Love the grey contrast used throughout the car!

This shop is local to me and they do absolutely fantastic work. I actually saw this very car in their shop way before it looked anything like this. The only thing they would tell me is that they had something special planned for it. They did not disappoint.

I love this! My first car was a '79 Mustang, though it was about as far from this one as it could be. (Inline 6, auto, and boooooring)
One thing though, that doesn't look like a '79 grille. it could be my memory playing tricks, and/or the angles, but I thought the '79 was more egg crate-y.

They actually managed to make one of the worst looking and least desirable years look good. Amazing.

Thank you so much for spotlighting this car Dino. It is so simple, yet stunning. Such an aggressive looking unit.