When attending Japanese events similar to last weekend’s Fuji 86 Style with BRZ, I always like to take a stroll through the parking lots to check out the everyday warriors that show up.

These are the cars that most likely don’t have any type of sponsorship, and anything done to them is purely out of pocket and personal time. Demo machines are great and absolutely have their place in the automotive universe, but cars that have been modified by people like you and I are the ones that truly resonate with enthusiasts.

This kouki AE86 reminded me of the simplicity and beauty of the Trueno I found parked up down a Yokohama side street last month, but with a few extra touches. The exterior remains mostly factory, a Toyota Racing Development (TRD) N2 rear wing complementing the OEM side skirts and front lip.

When it comes to modern wheels for old cars, the RAYS Volk Racing TE37V is hard to beat, and this car wears a set of limited edition 15-inch SL (Super Lap) 2016 versions.

Under the hood, the original 16-valve 4A-GE has been swapped out for a 20-valve variant from an AE111. It’s hard to know how serious the owner has got with this swap, but the addition of Toda adjustable cam gears and polished velocity stacks for the factory quad-throttle setup tells us that it’s at least lightly tuned, and perhaps putting out a few more ponies than the engine’s factory-rated 165PS.

On the exhaust side, there’s a set of wrapped headers running out to a full performance system. Coupled with the induction noise, we bet this thing sounds superb at high RPM.

A look inside reveals that time has practically stood still; there are a few select upgrades including TRD reclining seats, a TRD steering wheel and TRD shift knob, but everything else appeared factory.

Even though events like 86 Style are guaranteed to showcase some amazing builds, this Trueno goes to show that sometimes you don’t even have to venture inside to find some real gems.

What are some of the cars that you have came across hiding away in an event parking lot? Let us know in the comments section below. 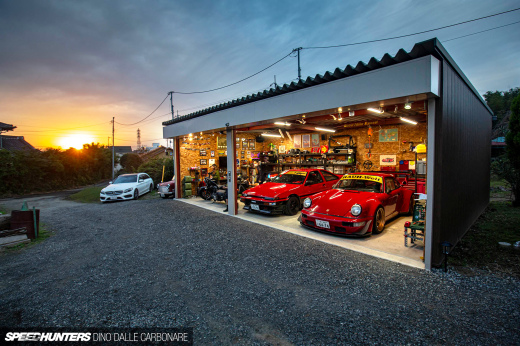 Yet the owner goes and lets the whole thing down by fitting tyres two sizes two narrow. seriously stretch does not look good, and it significantly hampers tyre performance, so that single mod speaks more to me about the owner than the rest of the car.

Stretch within reason does not hamper performance. Most autocrossers look for a bit of stretch, due to the fact that it reduces flex in the side wall, improving steering response and maximizing available traction. I don't agree with the stretch on this AE86, but a little stretch can be beneficial for handling.

National level Auto-X'rs definitely do NOT look for stretch. It's all about putting on the biggest tire you can per class rules. More grip is always better. Steering response is typically handled through tire pressures and alignment settings.

The guys running hoosiers? Sure. But most of your 200TW tires that are on cars in the stock classes prefer stretch, and perform better with some. A hoosier with significantly stiffer sidewalls can handle a 275 being pinched on a 15x6.

Again, that is where you are wrong. All the people running Street Touring classes(ST category, 200 tw rated tires) Still find the widest tire you can run in class. Nobody at the national level stretches their tires out. The 200TW rated tires that everybody uses have plenty stiff sidewalls and everything steering response wise it handled through tire pressures and alignment settings just like Lance said. Stretching your tires for autocross or the track actually makes the tires perform worse as they were not designed to be that way.

Low budget Drifters use stretched tires because they are easier to break loose.

Stretching a tire within manfacturers limits is totally fine. I stretch a 215/45/16 on an 8" wide tire on my ITR. It takes less time for the tire to settle in corners and helped improve steering response. I see tons of NC miatas running 17x9's with a 245/40 which results in stretch, within limits of the manufacturers limits. There are draw backs, like the tire breaking away easier, and without much warning, but there are also advantages.


If I was stretching a 195/50 on an 8 inch wheel I wouldn't expect to pass tech, because it isn't safe. But again, within the manufacturers limits there can be benefits to -some- stretch. There are tons of threads out there on stretching vs pinching tires, and there are benefits and draw backs to each with different types of tires.

I have always went with a squared setup for the best performance. No stretch, no pinch. The idea is to be balanced. I disagree with pinching tires on wheels just as much as stretching them. Through my experience in racing and those years of autox it was best if you just got the right size tire for the wheel you have.

I'm getting bored with this car. Well it is a very nice car indeed but too many similar car modified like this and they are look the same. This is not something new

its a 35 yo platform, hard to pull off unique functional mods

I love the simplicity of the 86 so light and sleek, good job

Not too plain, not over the top. I rate this.

IMHO, the 86 is one of my favorites and this one is sweet but it needs some meat on the tires. Never been a fan of small diameter wheels with low profile tires. They just look weird.

It's more interesting than people are feeding into. When has anyone seen a "burnt titanium" style prop rod for the hood? I can't say I ever have on an 86, or the neatly tucked away oil cooler running stainless braided, which what looks like 8AN line rather than you're typical rubber hose with some barb fittings. The bumper brackets that I can see peeking through the access hole in the bumper on the cover photo of the article look like you could eat off of it which. The all black gas door is a bit unorthodox as well. The "Hoat" modern day Toyota fluid it looks like it's filled with possibly. Some retro fitted looking coils with vibration mounts to ensure the maximum life span for themselves. I guess when you're in a country surrounded by more corolla's returning to the earth than clean examples, you tend to notice appreciate it more.

Probably the cleanest 240sx I've ever seen was in the parking lot at the 2015 Neo Classics show in Torrance, CA. This car put the S13s in the show to shame, especially with some amazing fitment that put the car's look just on the hairy edge of functional. Looks like it would be a blast to drive.

anyone tell me what the distributor rotor looking thing is on the exhaust cam of the engine?
never seen something like that before

I always spend time in the parking lots at all car events I go to and every single time I find something interesting. I highly recommend it.