“Dude, something is happening here,” says Sergey ‘ddKaba’ Kabargin. Indeed it is. I’m staring at a Smart Roadster, but one that looks a lot different – and markedly better – than how it originally rolled off the production line.

This is a purpose-built snow and ice drift machine developed by the same team behind the Flanker F. It doesn’t have an official name yet, but it really should draw inspiration from the fighter jet vocabulary, just like its big brother.

The idea of creating a car to beat drift Ladas at their own game was sparked after a Mitsubishi i dominated the ice in Siberia. Sergey’s team began a search for other foreign cars that could be competitive on ice, lightness and good weight distribution two key characteristics required.

Initially they looked at the Toyota MR2, Mini Cooper S, Honda S2000, Porsche 911 and other sports-oriented production cars, but one day a Smart Roadster was brought into the garage to be measured up, and a spark was immediately lit. This small mid-engined roadster weighed only 790kg (1,742lb) and had a 44:56 weight distribution. In other words, it seemed like a great base for a winter drift car.

We were invited to shoot the car as soon as it was finished, but what I didn’t expect was to have to do it in a blizzard. When I’d arrived in Saint Petersburg, Russia there was no sign of snow at all, but by the next day the weather had taken a turn, with further warnings that heavy rain was also on its way. We had to work fast.

While the crew weren’t all that happy about the conditions, to me it seemed perfect. After all, this is a car designed for the snow.

Our chosen location was a majestic spot on one of Saint Petersburg’s promenades. You’ll have to believe me when I say that it’s majestic, because on this particular day it looked like we’d entered Silent Hill.

Welcome To The Roadster, Vol. 1

In factory form, the Smart Roadster is not much of a looker, so it’s a good thing then that Sergey likes to work heavily on aesthetics. He mentioned that the car’s B-pillars were the only feature he was OK; everything else had to go.

Although my face was hidden under two hoodies, I tried to understand what this creation reminds me of. Obviously, its bigger brother the Flanker F, but from the rear especially it gives off some real Aston Martin and Porsche vibes.

The whole design is a showcase of different ways you can work with carbon fiber. When examining the body closer, my OCD was satisfied by how even the carbon pattern lined up. The solid weave is one of the best ways to distinguish a masterful craftsman, but combining different patterns, like the fractured carbon on the bumpers and side skirts, is another different level. On top of that was the mix of matte and glossy clear-coat. I’m easily taken in by black-on-black designs, and this combination had the same effect on me.

The custom front and rear lights were not fully connected up on the day I shot the car, but they were in place which is the important thing. What still needed to be added was an exhaust system – presumably something fat and fancy – as well as some sort of rear wing, which I really think would finish off this little beast.

The widened bodywork was designed to accomodate 18-inch wheels, which is good news for anyone wanting to build one of these cars as a stance or street project. On the race track though, the Smart will be running 15-inch rims with race-grade brakes and a chunky winter tire, so the look will be entirely different.

On the subject of building a car, what Sergey has essentially created is a kit that will eventually be available for purchase. Even though the doors and hoods are produced from carbon fiber, they still take all the original Smart hardware and things like locks and electrics, so they can be fitted to a stock Roadster with relative ease.

What will not be going into production is the custom 55-degree front angle kit, as well as the rear suspension. The suspension is based on MacPherson strut layout, but all the parts were 3D designed and CNC-milled. As a result, the front track has now grown from 1,250mm to 1,490mm, and the rear has gone from 1,285mm to 1,500mm. On paper, the car should handle very well, but snowy Siberia will be the ultimate judge.

The interior is a thing of beauty, and features custom-made carbon fiber race seats similar to those in the Flanker F, a flat-face suede OMP steering wheel, and a signature HGK Motorsport e-brake lever. Importantly for a winter car, the heater is still in place. The roll cage was designed to fit into the cabin space and not interfere with the original doors, but a lot of excess metal had to be taken out of the body to offset the weight the bars added. As it sits now, this competition car weighs the same as a stock Smart Roadster.

For the time being the Smart’s 700cc engine also remains stock; only the ECU has been tuned with higher boost pressure to accommodate longer gear ratios in the swapped manual gearbox. In testing, it has performed well with 1.5bar (22psi) of boost, but whether that much is even needed on the ice remains to be seen.

The gearbox swap provided the biggest headache for the team. At first, the plan was to upgrade the Roadster’s semi-automatic to a proper sequential transmission, but after weeks of writing new software and producing unique parts there were still some issues. As a temporary measure, the team installed a manual from a Smart ForTwo model, which is working well.

I titled the previous chapter ‘Vol. 1′ for a reason. A second version of this car is already on the way with a Suzuki Hayabusa 1.3-liter engine making 190hp and screaming to 11,000rpm. A future upgrade could add turbocharging on top.

At the moment, the ‘Smazuki’ is assembled, but not quite ready to test. The Suzuki engine and gearbox combination is in and connected up to a rear differential from Lancer Evolution RS, with reverse gear realized through a starter motor. The bigger engine required a longer subframe, so the Smart’s rear axle has been relocated 40mm further back from the original position.

When I visited the workshop where the second build is happening, a CNC mill was producing the front suspension for the car, which provided a good opportunity to closely examine the work behind it.

In the end, it took 12 months from the purchase of the first car to the finished Vol. 1, which is good going given that it’s highly experimental with many parts made exclusively for the project.

All in all, Sergey and his team bought four Smart Roadsters, and each one will be different. There’s the original winter drifter, the Hayabusa pocket rocket, a 600hp version with a turbo Evo engine, and something totally unknown for the fourth. What is for certain though, is that all cars will feature carbon fiber body panels and be certified for road use with Russia’s transport registry.

Right now, our photoshoot subject has landed in Siberia and is being tested in the mecca of winter drifting. All Sergey and the team need to do now is prove their point and beat those all-conquering Ladas. 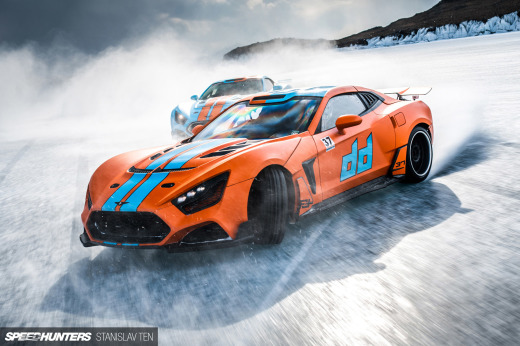 I like the roadsters in normal form (providing they have the glass hatch at the rear) but this is just another level, that looks so much better!

The side profile looks rather awkward, but that front-end is a major step forward from the stock car!

Looks to my eye like the result of a Miata RF mating with a Porsche 918. I'm loving this.

Take the side profile photo, squint your eyes heavily and you´ll see it looks pretty much 1:1 to a 996 Carrera.

Are those bespoke headlights? Or they're from existing cars?

Still not going to be as cool as a Spoon Sports S660!

looks like a car you'd get in Grand Theft Auto

Lol it's so weeeird. So much fabrication though, and that's always a pleasure to stare at.
So is that flanker thing. But they're believable, so it's like seeing a new color lol.
I didn't even really know about the Smart Roadster until now. Seems kinda cool to me. A far cry from the og Smart Car at least in the visual department.

whats the final curb weight of the car?

790kg, same as stock Smart. Keep in mind it's possible to make it much lighter by removing a lot of stock equipment, like most of the doors, stock hinges, etc. It's mentioned in the article.

The styling I can take or leave - I happen to love the original, and prefer it to this busier design.

But you buried the lede somewhat given that manual gearbox swap! *That's* what the Roadster has always needed, not new bodywork!

Fulcrum seems like a good name given it's short wheelbase and intended purpose.

My bet for the last one is on electric power.
All that torque must be helpful to get a car sideways.