I’ve seen enough Porsches for a lifetime this week. While I do have a couple other posts in the pipeline that involve the German marque – especially with Rennsport coming up – Infiniti’s area at the Pebble Beach Concours d’Elegance was a welcome sight.

Many of the cars at prestigious shows like this one are completely unrelatable; they either cost too much or are so old that they don’t make sense for any practical use besides concours events. With an entire week dedicated to cars that the average person can’t have (and cars that are German and Italian), it was nice to see some that are at least a little bit more ‘everyday.’

Feeling a bit like the Petersen Automotive Museum’s new Japanese exhibits, Infiniti’s Japanese Auto Invitational at Pebble Beach over the weekend paid perfect homage to not just Nissan, but other brands as well. The quality and selection both were impeccable, and it’s great to see these cars getting mainstream appreciation after so much love from enthusiasts over the years. I made sure to stop by after the exhibit was closed, but not being fenced off I was able to help myself early in the week after most of the setup was complete. I did go later and grab some extra photos of the cars that weren’t set up yet, but for my first visit the lot was pleasantly empty of foot traffic.

Naturally, a true Hakosuka GT-R was one of several centerpieces at the show. I really didn’t like how it sat from a side view, so much so that I didn’t edit any of the photos I took from this angle. It’s probably sacrilegious, but after seeing Rick’s GT-X in LA this one looked too high. However, if I saw the thing at speed it would probably look right, and since it’s likely the first non-clone I’ve seen it was great to come across.

Not only is it a complete time machine, but I don’t think I’ve ever seen a Honda in such excellent shape. This level of quality is exactly what you’d expect to see at Pebble Beach, and, as mentioned, the variety was spot on.

It would have been easy for Infiniti to fill the lot with Nissans that share DNA with the brand, but I’m thankful they didn’t do this. I’m sure there were many in attendance here who aren’t familiar with many, if not most, of the Japanese cars that were on display here.

As long the level of execution is there, no car looked or felt out of place, even here. Seeing them factory or very simply period or purpose-built makes sense at Pebble Beach given that the main event is the Concours d’Elegance.

It should also come as no surprise that an IMSA GTP-class Eagle MkIII was on display, representing the high end of Japanese racing dominance in the early 1990s.

There were a number of IMSA GTO cars at the booth as well, and while they were all in strikingly perfect condition, I didn’t take terribly too many photos as I preferred seeing them at Laguna Seca over the weekend being driven in anger.

Having run out of race cars to look at, I turned my camera at the rest of what came out.

This included a strange hot rod-inspired concept, a trend that continued over to a couple other concepts I saw at the show. I’ll share more pictures of it in a future post on the topic, but for now, enjoy the rest of a pleasant mix of Japanese cars, old and new, below.

I’m glad to see Japanese cars get recognition at Pebble Beach, but let me know what you think of the selection — as well as what cars you would have included if you were in charge of the booth yourself — in the comments below. 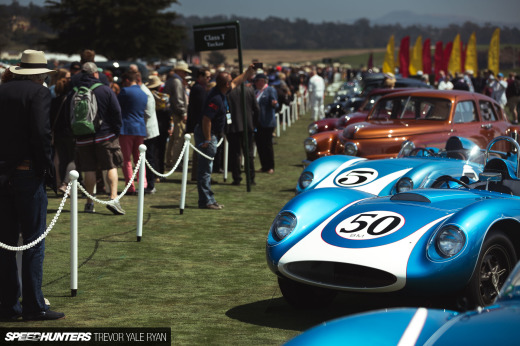 A Speedhunter Lost In America’s Most Prestigious Car Show

The selection is really good. From your everyday rides, to workhorses, performance machines, race cars and even concepts representing the future. I hope this is a start for Japanese manufacturer recognition at this event.

I'm surprised to see there of all things, a Miata. Those things are a dime a dozen and yet seeing one in pretty much pristine position sitting with all these special exotics at Pebble Beach surprises me a bit lol

It's a pretty monumental car for the Japanese manufacturers. One of the few cars to surpass 1 million units sold in it's admittedly multi-generational run, but as a performance car that's pretty freakin' amazing (compared to the Corollas of today's Toyotageddon).

Not to mention it's probably the most raced car in history.

Also, at least in my area (Europe), it's not that easy to find a good-condition one with no rust and not too worn out (there's a lot of 200 or 300 thousand kilometer cars on the market, and they show their mileage).

Wow...seeing that Integra really brought me back. My 92' DA was and will probably be my favourite car I've ever owned. No car has ever brought me so much joy and I felt a real connection with the car. Seeing one in such pristine condition really hit me. kudos Nissan for throwing down some classic JDM at Pebble Beach. And thanks Trevor for catching these.

That mini RS2000 lookalike is qute

the "RS200 lookalike" is a Autozam AZ-1, in case you wondered

Was that 240 Safari Car a reproduction?

I believe that car is a reproduction. The original Safari Z is at Nissan's Japan museum -- in original condition (last I checked at least). The car at Pebble was too pretty.

This hurts my soul... to have all of Japan’s greatest hits just parked and then seeing what The big Japanese Manufacturers has been up to now (except Mazda for the most part) just sucks in relative comparison... even directly with some models!

Honda axed the S2000 and botched the NSX (kudos for the female designer tho) which leaves us with what, a force-fed marketing ploy with the Si? Toyota never took their 86 seriously and will likely roll out a new Supra that will stay unevolved like Nissan’s now dinosaur GTR (“35”). Nissan’s “sports” cars are junior GT’s at best, overweight and cost cut, no competitions won in too long. Subaru has diluted the WRX. Mitsubishi and Suzuki MIA and likely dead to the US... the story just gets more grim when you compare what most other companies are currently making for us.

Japan! Wake up and compete! Make a Z 2/3’s lighter than a BMW/Audi. Make a new, carbon/midengine/whatever GTR that racks up the wins like it’s 2010. Make the supra make nascar and germany rethink what’s the faster car. Make an S2500 that revs to 10k and replace that NSX aluminum chassis with carbon. The wish list goes on for just about every JDM...

The only problem is that simple question : if they make those cars, will YOU buy one ? Because it's easy to talk about it on internet forums, and to dream about it, but unfortunately the dreamers rarely go further than that. The only reason because japanese car makers no longer make such advanced sportscars is because they don't sell them, and when they finally dare making some again, people just complain about them being "overpriced", like the NSX, or not "taken seriously", like the 86. At some point we should stop always comparing new gen japanese cars to their (mostly idealized and overestimated) 90's counterpart and just accept that things have changed. The only thing that has not changed with japanese sports car market is that the people who know generally don't have the money to buy them new, and the people who have that money will prefer to buy something else (like Porsche, BMW, Audi, etc).

yea I feel you on that actually. Hopefully the future has good things in store for us across the market.

It WILL get better.

It’s going to take a few years, but just watch

I love the Brat with the "jump seats"! Find that one or the newer model for a feature please!

It's not that a stock/original KPGC10 is "too tall," it's one that has been slammed to the ground being too crippled.