What do you think of when you hear the word Porsche?

Many things could come to mind: Decades’ worth of the unmistakable 911; the German automobile manufacturer’s unmatched success at Le Mans; the legendary 959; or perhaps it’s the ever-increasing collector value of just about anything that has the word ‘Porsche’ written on it.

With 87 years of car-building experience, the automaker from Stuttgart is one of the most successful marques of all time. From the racetrack to the roads we all drive on, Porsche is a heavy hitter. Everyone seems to wants one and I’m positive the brand sparks a reaction in every enthusiast alive today.

But now, think back to the ’80s if you can. While I wasn’t alive, a name still very much comes to mind when someone mentions that decade and Porsche in the same sentence. DP Motorsport.

‘Design und Plastik’ is one of the great Porsche tuners of old, but yet, they don’t even have a Wikipedia page dedicated to them. Some may have never heard the name while many others likely surmised that the workshop drifted into obscurity, like so many other niche tuners have over the years. But this isn’t the case.

I gave a bit of the backstory on DP Motorsport in the last chapter of my quick stop at Real Muscle Car (RCM) Miami, where I found that they owned two other DP street-purposed variants.

For all intents and purposes, the main takeaway ought to be that DP Motorsport got their start with the RSR, moved on the the Kremer racers, and have been creating insane race-inspired street cars ever since.

This is where Danny Lima comes in. While running RMC Miami and acquiring the first two major DP Motorsport 935 street cars, he’s exchanged plenty of emails with the workshop over the years.

On a trip to Essen for Techno Classica back in April, Danny decided to stop by DP Motorsport and formally meet the legendary Porsche tuner. During the visit he caught wind of a DP car just two miles away, for sale by the original owner.

As you might have guessed, Danny picked up the car and it’s the one you’re looking at now: a 1991 964 Turbo that received DP Motorsport’s carbon-Kevlar 935 street-style treatment back in 1994. It’s also the only 964 to have ever been converted to this spec by DP Motorsport.

This variant is the third and final evolution of the streetable 935-style conversions and also the last to pass Technischer Überwachungsverein. As much as I enjoy typing this, I’ll refer to the German Technical Inspection Association as the TÜV from here out.

It is simple, unless you want one. Due to the extreme rarity and the immaculate condition of the near 30-year-old Porsche, I figured I was lucky enough just to see it in the RMC showroom.

Who’s Up For A Drive

But this was not enough for Danny. The resprayed and refreshened car had arrived from Germany just two days prior to my visit, and the new owner was keen to put its street title to use.

So, obviously, we did.

If you’ve followed along from my visit to RMC Miami to the subsequent cruise and run-in with a friendly police officer, you already know we ended up across the saltwater from downtown Miami.

Out here, I took a closer look at what makes this DP Motorsport 964 so special to drive.

First off, the lightened car on Bilstein PSS10 coilovers has a real enhanced feel through the TechArt steering wheel.

Next, the stiffened and DP-caged chassis translates into a car that wants to speak to the driver, loudly. Finally, you’re held firmly and comfortably in place with DP’s lollipop-style seats. Of course, a million other more nuanced touches make the car what it is now.

Although it doesn’t improve handling on paper, seeing the signature of Ekkehard Zimmermann (DP Motorsport’s founder) on the dash ought to give you absolute trust in the craftsmanship (or give you a nervous fit as you take the one-off creation up to speed).

Under the deck lid it looks nearly as nondescript as any other Porsche.

With a large intercooler assisting the K27S turbo in its quest to deliver over 450hp through the 3.3L flat-six, there’s not much else to look at here.

Massive rear deck lid back in place, Danny and his younger brother were ready to head out to our next destination.

As it turned out, we had a couple more stops before we’d part ways and call it a night.

While I (sadly) wasn’t able to capture a decent exhaust note in the tunnel, you can get an idea of how brutal the car is just from a simple start up. Have a listen to that glorious cackle when Danny lifts too.

Honestly, when I first saw the car I thought it looked a bit odd. And due to its pristine, like-new condition my instinct was that it was based off a much newer model than a ’91 964. Feel free to share your initial impressions below, but for me it was confusion with a healthy dose of desire mixed in.

Of course, anyone who really knows Porsches would recognize that roofline and other 964 cues immediately. And, if you really knew your stuff, you’d know that it’s mostly thanks to stringent TÜV regulations that this is the only one of these ever built.

But after the initial few minutes of double takes and strange feelings, the 964 totally grew on me.

I’m sure some will disagree with my current feelings, but I came to love every line on the car. Everything’s there for a reason.

I’m sure this personally has to do with my long-standing love for the old school Kremer racers, and being able to drive the closest (legal) thing to one on the street would be an absolute dream.

It’s that much better due to the fact that there are supposably no other 964s like this one, and perhaps only 100-odd 930-based builds of similar spec.

This means it naturally attracts plenty of attention everywhere it goes. It’s something that no one else has and only a handful of people have ever seen.

Beyond the attention and aesthetics, this car brings with it pure Porsche racing heritage. Like Danny told me, this is a car that was “built for a meaning.” It was created before the bolt-on overfender era and represents so much more than any other 964 can. It’s a serious and special car, a car that means business.

So now, when I think ‘Porsche,’ I think of this last, final 935 street-spec conversion from DP Motorsport.

All Show & All Go
ADVERTISEMENT

I feel the same way about so many cars!

Surely one of the ugliest Porsche I've ever seen. Including the C88. But hell, it's also one of the craziest!

Deffo not your average 911. Takes some time to get used to the look, almost as if it's some sort of a kit car. The sound is proper 911 though and the photos are top notch, as per usual from you

For sure! And thank you!

Porsches should always have big wings, of course.

its one of those cars that so hideous your glad they only made one even though you understand and respect the intent and workmanship and don't want it to be consumed by fire, like all countachs with front mounted wings should be.

So now, when I think ‘Porsche,’ I think of this

sorry but when I think ‘Porsche,’ I can't help but thinking about those luxury SUV an Sedan bullshits that followed by other sport car companies.
but about this specific car, I agree, this is a car that was “built for a meaning.”

oh YES. i always have a soft spot for slant-nose porsches but this is absolutely wild. as close to a homologation special as you're gonna get these days

Yeah for sure, the history of DP Motorsport makes this car super special to have. Awesome the owner actually takes it on the street too!

any time I see "for all intents and purposes" all I can think of is "intensive porpoises"
gives me a good laugh every time.

I'm glad this was your takeaway.

of course it goes without saying,

yet to find an article here i haven't learnt something from .

Hahah thanks! I'm just messing with you

I am so surprised to see a few people calling this ugly. To me, it is a thing of absolute beauty, especially from the front.

Haha I definitely thought it was an ugly duckling at first but I agree with you. When you consider the history, the feel, the sound, and everything else, the aesthetic fell into place for me. Super-functional and everything is there for a reason.

Welcome to your audience. I personally think you are bigger than this publication. Your articles and Jordan Butter are enough to start your own stuff i'd read religiously.

Since that thing has been made, both the front-end conversion and the rear assembly have been outlawed in Germany, so building another one would leave you without being allowed to drive on public roads.

Happy to have read this. I dig the style and the craftsmanship. As a whole, yea the car's kind of ugly lol but the individual details - especially the way the light fades away into the front intake - are real pretty.

Thanks for the read!

But speedhunters you're slacking

I was hoping you'd link this old story for newer readers:
http://www.speedhunters.com/2013/06/porsche-professors-from-the-old-school/
Also, I saw this a few days after the article and dropped everything!!
https://youtu.be/0qjC4ZLHtOM

I forgot I even ever read that! Way to dig that up.

And yeah the Top Secret Supra! Miami is nuts, I shot that car out there as well if you scroll down the main page a bit. If those guys invite me back for a drive I'll get some better photos too

Am I the only one that has this urge of drawing silly faces on the seat's headrests?

WOW!! Finally german built Super Porsche,I am in love This article is great this is not a bolt on flare car this is a really an aerodynamic car that its proven it self at race track all over the world........ 935!!!!

I would like to see the coverage of this beautiful 964 race car. 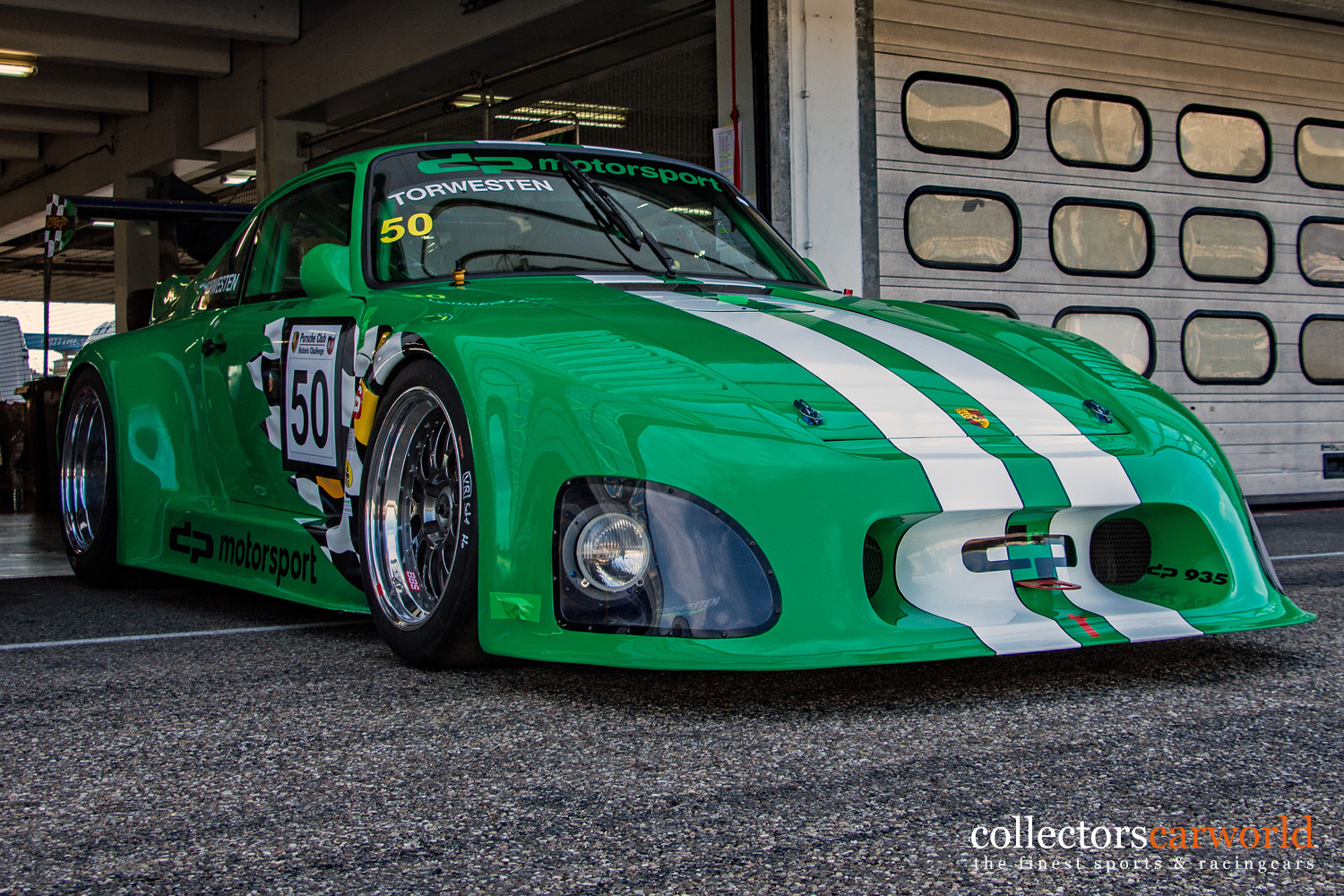 Give me his number and I'll be there