If you needed any proof of how serious Escort are about their time attack Mitsubishi Lancer Evolution IX, a 53-second Tsukuba Circuit lap time is it.

We first saw the Escort CT9A at last year’s Attack event (see the video above), but in the 12 months since then, Ando-san and his team have been busy refining the setup.

Just last month they set the fastest lap time at Central Circuit, and at the recent Attack Tsukuba event recorded a 53.716. That’s just under a second off what Taniguchi and G-Force have been able to achieve with their CT9A this season, but still very impressive. It really seems like everyone is out to go as fast as possible, properly taking advantage of the aero revolution that’s been happening for a while now.

But it’s also in the mechanical side of thing that the envelope has been pushed. To go faster you have to go a little crazier with how you tune your engine, and because Japanese performance parts makers almost entirely concentrate on road cars these days, local tuners have been forced to look outside of Japan for components that are up to the task. That’s why the 4G63 in the Escort Evo IX runs a Magnus Motorsport 2.2L stroker kit imported from Canada and has a dry sump for extra piece of mind. They’ve just fitted the new GTX3584RS turbo from Garrett, which is mounted low on a GCG exhaust manifold. The engines also has the shortest exhaust I’ve personally ever seen on an Evo, exiting right behind the headlight on the driver’s side fender while the wastegate screamer pipe shoots flames though the hood. We do love a bit of drama!

Endless brakes take care of hauling the car down from speed, and a custom set of dampers have been built to take into consideration the high levels of downforce the car develops.

Compared to the HKS Super 86 however, the Voltex aero looks very much last generation to say the least. It’s obviously still very effective though.

The motor sends drive to 295-section Yokohama Advan semi-slicks at all four corners via a Holinger sequential transmission.

I really like the unpainted look of the car, with the raw carbon Voltex aero hiding the stock body below. It will be exciting to see how much faster Ando-san can go, but if he’s achieved so much in one year, something tells me there is a hell of a lot more potential hiding within this epic Evo.

Rear looks quite simple compared to the rest of the car, I was expecting a huge diffuser.

That motor looks so good. Thats one angry 4G! would love to hear it screaming

That "old aero" is completely effective. Not old school at all. Hop off HKS' d.ck, it's not like its brand new

LOL guys, there are a lots of innovations coming in each year, which makes stuff old even at this level.

This is basically the same aero as the Tilton Evo. I wouldn't call it last generation.

But it is! It's years old, and that is old

Even Tilton themselves said their car was old. New cars being made every year with more crazier set ups that look less and less like the original chassis. It's a very fast changing sport. Tilton's last win was in 2015 WTAC which now is two years ago.

I'm only here for the Garage Saurus r32

Haha it was a nice car but nothing too crazy

No, I was hoping for more too.

Alright, I'll make it up to you guys. Shop visit. It's been such a long time I'd long overdue!

"piece of mind" or peace of mind?

quick question for all of you, does the presentation mode work for you on PC ?
I can´t properly use it, seems to be buggy, because all I can see is the photo and the white navigation bar at the bottom, but no text to be seen. I already wrote speedhunters an email (like a MONTH ago) but they didn´t answer it.

Forgot to add a snap, so you can see what I mean. 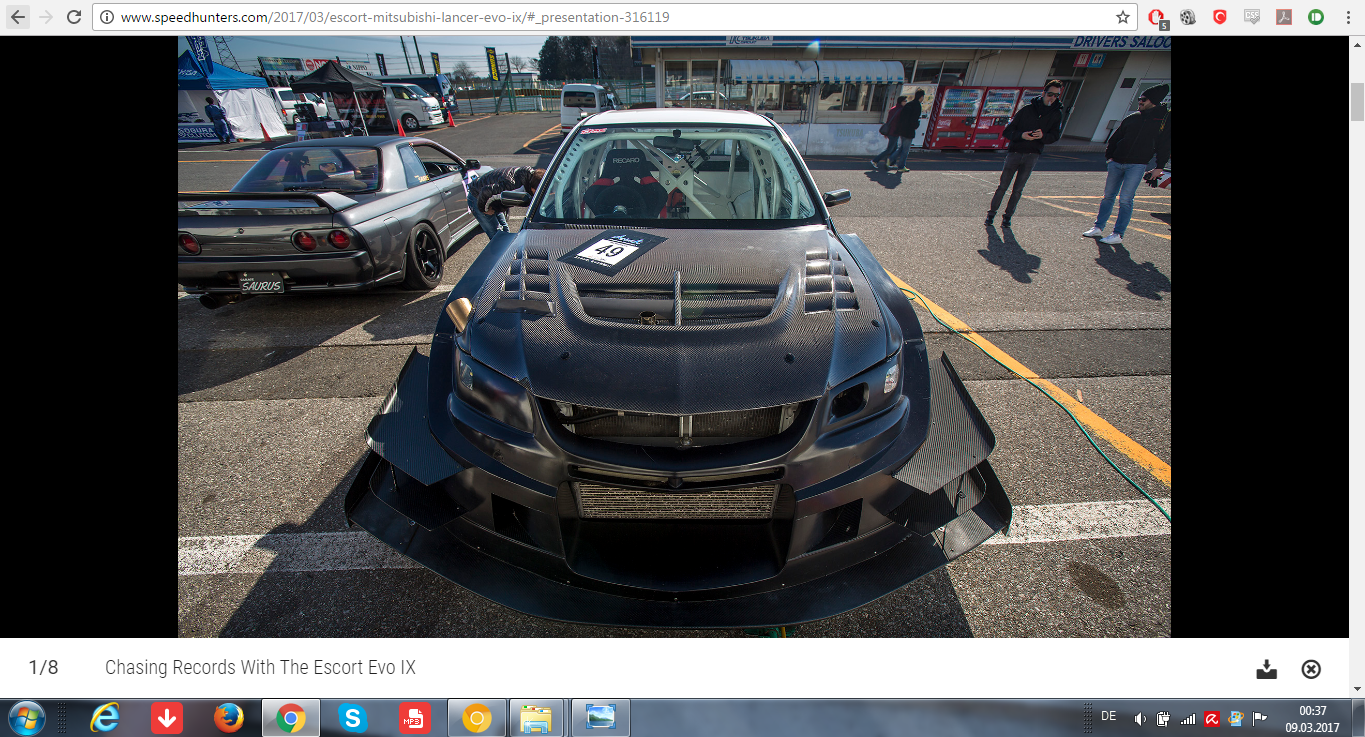 SInce when ? The last time, I was able to use it, you were able to have the text "on and of" using the arrow keys. Was there ever an announcement to the change ? Somewhat disappointed by now, i must say.

I noticed that too, it's not too much of a hindrance but it was nice.

Hey Dino, is hillclimbing a thing in japan? I was just thinking yesterday (after watching some pike's peak footage) about weather any of these time attack build shops also attend/build cars for hillclimb events, or what kind of builds hillclimbers in Japan have. Do you have any idea, or know of any events?

Admittedly, I probably have to spend some more time at the track.

However, my gut tells me that many of these aero add-ons are probably detrimental on a small track like Tsukuba.

That track features many low speed turns where that type of aero probably doesn't help much. Of course, on the higher speed portions, they are probably also slowing the car down with drag.

In the higher speed corners of a larger track, the additions could possibly help. However, the effects of drag (at high speed) would likely be more noticeable as well. Not only that, but the frontal area of the vehicle has been significantly increased...which also negatively affects aerodynamics.

It looks cool, but I'm not sure if all the changes can be justified.

It makes you wonder if the Evo's aero is that lacking...maybe it's time to change platforms.?.?.?

Back straight - this is where the aero drag will start to work against you, but it's hardly Fuji - the final RH turn onto the Finnish straight is the highest speed turn on the circuit, any losses on that back straight are quickly eaten up by the speed gained from downforce around here

Looks impressive! Could we have a potential new 'World Time Attack' Challenger?