Taste is a funny thing. What’s revered in one part of the world, can be reviled in another. But there is no right or wrong, it’s all completely subjective.

Travelling around the planet with Speedhunters has made me more aware of this than I probably ever would have otherwise. It’s pretty amazing how different countries and cultures interpret what makes a great build and how different two of the same car can ultimately turn out, depending on where they are built.

I think there are few better examples of a region which best encapsulates this than Australia. Everything they do is amongst the best in the world, regardless of which automotive sub-genre it belongs to. If it’s JDM, pro touring, muscle or whatever, you can bet your ass on it that there’s an example of each that is up there with the best builds on the planet. From a car culture point of view, they do one thing that is pretty much exclusive to Australia and not something you would expect to see anywhere else; their own domestic muscle cars.

It took me a long time to get my head around the huge tucked rim style of the retro Holden Commodores and Ford Falcons that dominate the Australian car scene, and to be honest, I still struggle with it. I don’t really get it. But that doesn’t matter a damn, because this isn’t a style that’s for me. It might not be a style for you either, but it is something that’s extremely desirable amongst a lot of the Australian car community.

The Holden and Ford divide is maybe one of the most famous rivalries in the world; you’re either red or blue and nothing in between. For most, their choice was passed down (enforced by?) by their parents or an earlier generation of family. If your father was a Holden fan, there’s a pretty strong chance that you’re going to be one too. The Commodores and Falcons represent decades of Australian motorsport history, much like the Mantas and Escorts, the M3s and 190Es, and the Mustangs and Camaros do for the rest of the world. That in itself is simple enough to understand as to why they’re so passionate about them.

How they build them, however, isn’t something that we’re used to outside of Australia. The recipe is simple: clean and understated bodywork, excellent workmanship, mountains of power (that comes from a source which is loyal to the brand), relatively low and tucking the largest and widest wheels the car can. They’ve a very distinct way of going about it, and Anthony Saf’s ’85 Holden Commodore VK is maybe one of the best examples in Australia.

To start with, the craftsmanship is simply a wonder to behold, regardless of how you interpret the overall aesthetic. Every nut and bolt, inside and out, looks brand new. The Galaxy Grey paint is flawless and the lights, panels and trims are perfect. They should be I suppose, seeing as the car had just been unveiled at Fitted Friday a few days previous, following an intense 10-week build.

Power, in this case, comes from a GM LSA, a 6.2-litre supercharged V8 that’s found in quite a few HSV (Holden Special Vehicles) applications. In completely stock form they produce somewhere over 550hp. They’re not a particularly good looking engine, which is why I’m assuming that a custom engine cover was fabricated, to ensure continuity of the smooth theme throughout the car. The engine cover perfectly interacts with the modified bonnet too.

The interior too has been cleverly reimagined. Four short seats have been used, front and rear, with a centre console that extends all the way rearwards. Immaculate isn’t the word to describe how good the interior is; it’s a fully modified space that looks like it could be completely stock. Brilliant.

The wheels will maybe be the most divisive part of the car for the average non-Australian, purely for their size over anything else. It’s not just a case of bolting them up either, the rear has been tubbed to accommodate the 22×10-inch Trofeo Forged wheels. The rears feature an interesting combined concave and dished finished, while the narrower 20×8-inch fronts emphasise the directional twist.

It’s an immaculate car, and from what I’ve been told by people who know a lot more about this scene than I do, it’s maybe one of the best ever.

When I’m faced with something that doesn’t immediately attract me, I find myself trying to identify aspects that I can relate to or respect. Fortunately, there’s a lot in here that deserves respect for either its execution or the idea in the first place. I might never get it, but then again it doesn’t matter. Because so many people do. 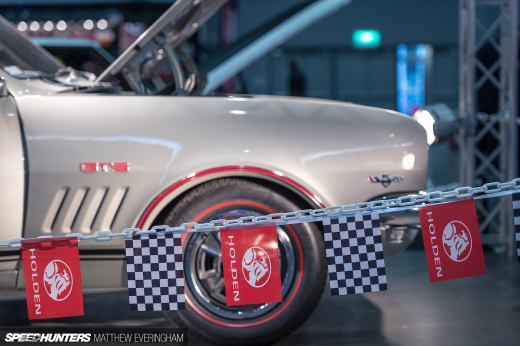 Matboy_Au Funnily enough, I'm a Ford man in Europe but I prefer Holden's offerings in Australia.

This is the best VK I've ever seen. I honestly am not a fan of the Australian domestics, especially the VK but damn this is nice. The build seems to intricate. The interior looks so clean. It's all so well designed.

As for the big wheel thing in Australia, the Holden v Ford battle has always been Falcon V Commodore. Both cars are big family sedans. This leads people who own them to want pretty big wheels, like 18s or 19s. It's very rare to see Jap or Euro wheels as they're either not made in 19s or way too expensive. So the owners go for domestic wheel companies which cater to their big wheel needs. The whole "go big or go home" philosophy with power and burnouts in Australia also applies with wheels hahaha

Not all the other scenes here do that. The JDM and Euro scenes tend to stick to smaller diameters. this is just one part of the scene that is interesting regardless if you like it or not. Props to Speedhunters for showing it though. Australian cars that reach big mediums tend to be their Jap or Euro cars and not really their domestics.

Wow that's a proper build, I'm not a fan of the Australian car scene and the Aussie cars but that thing is something

there's a very basic rule that needs to be adhered to when selecting wheels ; Width MUST be at least half Diameter.

Both sizes of these monstrosities fail.


despite the exterior roller-skate looks, That interior is amazing!

foz scibO And an Eyecandy Motorsports sticker plastered down the side

OMG its a MK1 Vauxhall Senator! (not quite though, I know, I know...) what a beast though, a thing of beauty. Reminds me of so many cars I've loved over the years but have never owned.

Thanks for sharing Paddy

I wasn't expecting quite such a nice interior. Well done

well here's a highlight - with Trump in office, I struggle to find something to like about that sorry fuq, or my own country - so I don't have time to go on and on and on about how tire contact patches SHOULD touch the ENTIRE pavement! LOL

I think these 'Strayans want to compete with King Kong 'Cuda! One hell of a build!

Didn't we make that too? Or was that an NZ build?

How does one stay out of trouble with a car like this?

Idk, I don't think it's that weird. The 22's wouldn't be out of place swangin in texas for a Bun B video. I can dig it.

In this day and age, when you get labeled a "hater" when you don't like something someone else has created, then I guess I'm a "hater". In my opinion this car looks horrible. I never seem to get this kind of style try as I might. All that being said, I have no bad things to say about the craftsmanship, which seems to be of excellent quality.

If you were to quantify Ozzy style into 3 world it would be Donk Pro Street. Now you could also include pro touring but pro touring is really just pro street with wider wheels and more money thrown at it. If your from Florida were Donks and Pro street are still pretty heavy Ozzy style makes perfect sense.

My uncle sold my dads Holden as my uncle was a Ford fan. I'm sure there was more reasoning but that's the basics
He liked fords, my dad liked holdens, they took brotherly rivalry to a new level. My uncle sold my dads car from under him. (Aaaah, the 70s....)
My dad wasn't impressed, and eventually left Australia for 25 years.
They didn't talk for almost thirty years (!)
last time I was "home" my dad stuck a vinyl sticker across the windscreen of my uncle's Ford xr8.... (a car I'm mildly obsessed with....)
It stated "FORDS WRECK FAMILIES".
They talk now, but cars in Oz seem far more likely to cause rifts in a family then supporting Hawthorne....
I chose to ride bikes and buy Japanese to stay the fuck out of the arguments

I can vouch for this reply lol. This style could easily become popular in Florida as there are so many Donks and so many absurdly over powered street cars. At some point people will do both

Give it a stick and some meat, I'm completely sold.

Super clean, especially the interior..I can't get over no headrests though. Expect serious whiplash if any impact happens.

Frozzy You simply don't drive it. Or trailer it everywhere. Aussie cops would be all over this like a fly to sh*t

Great build, great detail, but the engine cover and wheels are terrible.

hate to think how mach the rubber costs on this thing

Don't worry Paddy, you're not the only one who doesn't get the whole giant tucked wheel thing. I'm Australian and I don't get it.

Such a nice car yet such ridiculous wheels. Fucks me off.

foz scibO Thats the RX3 recipe. Too many of those ruined in this country.

Love the overall build; but I have to agree with some of you - I can't seem to grasp the idea of having huge tucked rims. The interior though.

Can't help but most Aussies in the car scene would think the wheels are well over the top. I suspect that's the reason for the tongue in cheek plate.

I'm an Aussie and hate the giant wheels. Will never understand why thwy think it lools good.

It's weird, as an Aussie I never really dug this style until the rest of the world got a taste of it.
Now I feel a strange need to defend it. Kinda like raising a child who ends up going to prison..

Yes the style is an acquired taste but you'd convert a lot of people if they heard this machine rev and idle. What happened to the short video clips ?

It still looks weird to me, but some cars just look so good with this, and the VK is all of them.

I agree, I'm Australian and I don't get the whole commodore burnout scene and such but I can see the effort in them but I'll forever prefer something JDM