The Beginning Of The End

“It was supposed to be a daily.” If there’s a phrase uttered more often among car builders, I’ve honestly yet to hear it.

We tell this lie to ourselves all the time, but in this story Josh Wilson wasn’t the one to lie to himself, his friend did. Josh legitimately set out looking for a daily driver, and it was his friend Keegan who suggested a Z car would be a great choice.

At the time Josh wasn’t really into cars, at least not as much as he is today. But it didn’t take Keegan long to convince him that the sporty L28-powered Japanese coupe would make a great daily.

Add to the fact that the seller of this 280Z was even throwing in a second motor free of charge, what could possibly go wrong?

So Josh and Keegan bought the car and towed it home, then spent the entire night combining the parts from each L28 motor so the car would fire up the next morning.

Josh didn’t know it at the time, but in those 12 hours he was inducted into the world of car enthusiasm. By comparision, the several-hours-a-night schedule he would later adopt would be light work.

Prior to getting heavily involved with his 280Z, Josh had always worked with his hands. As a child he was the type to take apart dad’s VCR while he was away, and then scramble to put it back together before he returned.

He eventually turned that technical interest into a career as a mechanical engineer. At work Josh spends most of his time behind a desk, but when he gets home the slacks come off and the oil-stained jeans go on.

Through his therapeutic nightly wrenching sessions, the Z did wind up a fairly capable daily driver. But with his friend Keegan still operating as the devil on his shoulder, and his own angel fascinated with making the car better, things quickly got carried away.

The Z is Josh’s first build, and he soon became addicted to the feeling of accomplishment that comes with doing something yourself. Each successful DIY project led to another, which led to another and so on.

The Frankenstein L28 motor in Josh’s car was relatively healthy, but after he picked up a supercharged Dodge Magnum SRT8 as a new ‘daily’ the vintage six didn’t put the same smile on his face it once did.

So he sold that motor to another local Datsun enthusiast and picked up an LS1 for a quick shot of power.

To handle the increase in output, Josh upgraded the sway bars front and rear, and installed a set of Ground Control coilovers. After a few spirited drives, Techno Toy Tuning GTX2 front control arms and rear lower control arms were added to the mix.

Helping keep him out of the cabbage is an OEM+ big brake setup comprised of Z31, 240SX and 4Runner parts.

While enjoying the LS1 and upgraded suspension, one faithful day disaster struck. Josh and the Z found themselves on the losing end of a battle with some spilled oil and a pole. Thanks to a cage built by Garage Auto Hero, Josh was largely fine after the accident, but the same couldn’t be said for the Z.

With a show in four months, instead of sitting in the corner licking his wounds Josh hunkered down and set about rebuilding the car.

The driver’s door and rocker panel of the Z were completely destroyed, and though he’d never done it before, Josh managed to replace all the twisted metal himself. A bit of luck enabled him to find a 280Z in a local junkyard and he used parts from that car to fix his own.

Having made his way through bringing the body from pretzel to straight, Josh decided to tackle something he’d had on his mind for a while: custom aero. Taking his vision from idea to reality was one of Josh’s favorite parts of the build.

The custom package starts with a new front bumper and splitter.

This is followed up by Skillard side skirts, plus a custom rear diffuser and complementary rear spoiler. Keeping the custom body work rolling, fender bracing was added, and to finish tightening everything up a Bad Dog rear frame rail reinforcement was fitted.

Coming in just ahead of his four-month timeline, Josh opted to skip paint and leave the Z in primer grey.

Already hooked on LS power, Josh raised the stakes when his car was off the road. The LS1 was stroked and fitted with CNC-ported 243 cylinder heads, a 234/246 cam, and Brian Tooley Racing double valve springs and retainers.

The real kicker added to the mix in round two of the build was an LSA supercharger pushing 12psi of boost. There’s a T56 6-speed manual transmission, Drivelines NW driveshaft, and R200 LSD with Z31T axles to help get all the newfound to the ground.

Inside the car is pretty much all business. The factory door cards have been replaced with Skillar units and the seats are Sparco Grids shod in Takata Racing harnesses. There’s also a Sparco wheel and a host of Auto Meter Phantom gauges. It’s a spartan setup, but a little brushed aluminum around the place goes a long way in making it look quite refined.

Now well and truly addicted to building and driving, Josh has a few more items left on his list to tick off before he deems the project complete.

Paint is the most obvious missing link, but before that he wants to work on keeping the engine cool. An entirely new cooling package is on the list, along with an upgraded methanol injection setup to replace the Snow Performance system currently employed. From there, a new tune will be thrown at the motor with the hopes of hitting 700hp.

The Datsun might not have turned into the daily driver it was initially meant to be, but Josh really has no regrets.

To be fair, if my ‘daily driver’ evolved into something like this I wouldn’t have any regrets either. Just a lighter wallet. 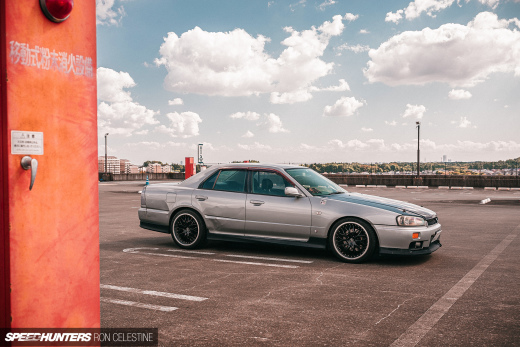 digging the front and rear mods on this car - I love the brushed aluminum in the interior as well! What color is he going to paint it when its time? the same purple before the crash?

That is the ugliest rear junk in the world. Everything else is amazing.

Not sure what color I'll end up with at this point, but a lot of people want the purple back!

There's something about a deep purple that is almost always satisfying. I'll hop on that bandwagon. Do it!

As well as the primer contrasts the aero mods, it would seem a lighter color would be the ticket.

Are those.......cupholders???
Probably in the least convenient spots, but surprises me they're there in the first place.

"THIS"
I'm agreeing with you and also quoting Doug.

Now that's what I'm talking about, a true phoenix rising with this one and rocking LS power to boot.
Love the aero and wheel choice, true track star.

People need to stop modernising these beautiful classics and taking their soul away.

You should buy one and do what you want with it.

Just BS to say someone should "only do it this way or that way"- it's HIS car, not yours!
Whether or not he follows YOUR thinking doesn't matter a bit to us or him, hopefully, and probably not considering his background.
Amazing he's done what he has with NO prior experience, so overall a BIG thumbs up from me on this one.

Everyone is entitled to their opinion but seriously, when it comes to modifications the person opening their wallet is the one making the decisions and has every right to do what ever they want to their car. In the end, if no one was to modernize their car then there would me a lot more of these cars in the junkyard than on the road, you see it as an owner ruining a classic but I see it as someone keeping one of these from the scrapyard.

Not saying Yeah Nah is correct but the irony of your post is lost on you...

I actually quite like the idea of "breathing new life" into an older car, classic or not. There are thousands of these cars up and about, and if all were restored, instead of resto-modded, maybe things would seem a lot more boring. Each car is like a blank canvas, and its up to the owner to express themselves as they wish.

What I also realized, the owner wasn't necessarily into cars from the beginning, so he was also not aware of "The Rules of Modding" or whatever, so, he came in, innocently.

There's a difference between restomoding and making it look like it's not even a classic.

Well said, I completely agree with you.

Too much for me but hats off for all the DIY work done. It seems like a rally car specially with the wheel-tyre setup. And these steel wheels are almost perfect, they can beat a lot of alloy wheels in ease.

Good thing he put that diffuser on and left those large front mirrors on the hood. solid stuff

Love everything about this build. Kudos to building it how you want. But from a safety standpoint the welds on the strut braces in the engine bay look quite dangerous to me. I'll fully admit my welds started like that too, but stacking mig tacks to get that stacked dime tig look is very structurally unsound. You simply can not get enough heat into the metal to get good penetration. Thats why they look like blobs with no undercut. Essentially those welds are like beads of glue on top of the struts. Dont get me wrong, im not knocking your build, just looking out for your safety. Find a friend with a good Tig welder and just start practicing on scrap. Getting tig proficient is a great sense of pride and opens a whole new world of fabrication possibilities. Keep it up brotha!

welding is such a cool skill. I've got a few friends making some good $$ doing it for a living.

I'm on your side Casey, but it's genius* lol

Love me an LS swap...but on a serious note, how does one not blow up one's engine with an 11.5 SCR and 12 PSI boost. I get meth injection but that's only worth 1-3 octane points; you'd still need to drop cylinder pressures a lot. Unless the cam bleeds off excess and normalises the Dynamic Compression.

It looks like the LSA of the cam is designed to do just that. Appears to be a custom grind?

man is that hideous; way to ruin a car...

4runner brakes comin in hot again, weird.
I like the story behind this one. Definitely llike all the custom bits

I really can't wait until this throw-it-on-and-hope-it-works aero trend dies.

And to all the haters in the peanut gallery, you guys are starting to sound like the old timer weebos I meet at muscle car rallies. Take a good look in the mirror because you guys are turning into the person you hated growing up.