I’m not sure if this story has a purpose, but it’s one that I’d like to tell anyways.

It’s rare that any two days in this job are the same, but even the days where things are meant to be relaxed and scheduled as ‘downtime’ can sometimes turn out to be the most memorable. This was one of those days.

Back in the summer, I had just come off two days driving and shooting an M2 and a Leon Cupra on the roads around the Nürburgring, with a nice little BBQ on the last evening to round off what was a pretty spectacular working week. I had a couple of hours to spare on the last day before heading back to Düsseldorf to catch a flight back home, which I had planned to spend by enjoying my humble Hyundai rental car exploring the roads around the ‘Ring and watching whatever was happening on track.

Our resident German race driver/engineer/beard guru, Michael Grassl, who works at Manthey-Racing, obviously took a little bit of pity on my 1.2-litre Korean estate car – he shouldn’t have, it reached an intergalactic top speed of 189km/h on the autobahn, allegedly – offering to give me a tour of the area.

His idea of car was a little bit more up market, in the shape of a 991 GT3 RS that Manthey-Racing were testing on a full complement of KW’s Competition specification coilovers. A road car, on race suspension on some of the best driving roads in the world with a race driver who drives the roads on a daily basis. Hyundai? What Hyundai?

Before we left, a quick refuel was required. Ed’s Tankstelle, the fuel station which is situated just across the public road from the Nordschleife’s famous Dottinger Höhe, is arguably one of the most famous pit stops in the world and almost always has a plethora of fascinating and exotic machinery sitting on its forecourt.

While Michael proceeded to fill the car with Super Plus, in the most German way possible, I set about trying to capture the ambience of the moment.

Anywhere else in the world, a GT3 RS on a forecourt is at the very least a notable occasion. Outside of Germany, I don’t think I’ve ever even seen one on the road.

At Ed’s, especially on a Destination Nürburgring day, not so much. If anything, they’re a little bit common, although they never stop feeling like a special car, even in abundance. They always raise a smile or an eyebrow when you meet one coming towards you.

I was surprised that the fuel tank was so large in the GT3 RS, but its 4.0-litre flat six is going to get through that quickly, so it’s sort of stands to reason. This particular fill worked out at about $105USD for 20 gallons or thereabouts, an amount which tightened my buttocks a significant amount.

Needing a sit down, and I wasn’t even paying, I just wanted to enjoy the moment. Of course, it would be nicer to know that I was about to experience this car from the better seat, but I pretty okay with what was about to happen. Hey, any car that has a pit lane speed limiter is all good in my book.

There are few things in life more enjoyable than catching up with good people in a good situation. Turning off the main road, onto a side road that I must have drove past a hundred times before, Michael explained to me that this is his usual commuter route, the road he drives back and forth over every day.

Admit it, you’re a little bit jealous too.

Approaching a downhill left, into a sweeping uphill right, Michael tells me that this is one of his favourite corners on the route. From the top of the hill, it’s perfectly sighted and with nothing to be seen, Michael tells me to hang on. It was at this point that I realised that the GT3 RS doesn’t come with ‘Jesus’ handles. Jesus, indeed.

There was a short acceleration phase towards the corner, the distinct sound of the flat-six following us from behind. Where I would have braked, Michael was still accelerating. For the record, there are very few drivers that I have faith in, but Michael is one of them. I knew we wouldn’t end up in the scenery, but my brain still struggled to comprehend how quickly and effortlessly the GT3 RS took that first left hander. I vaguely remember a lift, maybe a downshift, but I can’t recall hanging forward in my seat belt. The entire section was taken in such a fluid action that I might have forgotten to take a breath until we were climbing out the other side.

Our adventure continued. We had no real destination in mind, we were just randomly roaming the German countryside, with Michael occasionally pointing at a landmark and telling me a little something about it. “That’s where I live,” as we passed a building that I couldn’t even tell you the colour of.

For all of his speed, it was Michael’s decision making that impressed me the most. You could tell, even from the relative sterility of the passenger seat, that he was maintaining a cool head and keeping everything firmly under his control. If there wasn’t a 100 percent clear line of sight or certainty that the road ahead was clear, the pace was relaxed and kept in check. Only under the exact circumstances, would he leave the GT3 RS off its leash, so to speak. But there was always control. I respected his restraint.

I wanted to capture some dynamic shots of the car and had a great road in mind. Descending from Höhe Acht back towards Adenau village itself, is your quintessential German driving road. Lined with trees, smooth tarmac and the occasional hairpin, it’s perfect.

I’m sure Michael had no complaints driving up and down repeatedly for the camera, not that I would have listened.

These are such remarkable cars. I think they’ll go down as one of the all time great Porsches, manual gearbox be damned!

500hp and 9,000rpm in the most evolved chassis you can buy today, a chassis which can you can use and one which will both teach you and encourage you to be a better driver. I don’t think I’ll ever get over that I won’t ever have one parked outside my house, unless a significant lottery win occurs. Until that does or doesn’t happen, I’ll keep making the most of experiences like this.

Heading further downhill into Adenau, we just kept shooting and making the most of the sunshine. Looking back on it, it was sort of funny because we were really only doing this for fun. There was no goal or ulterior motive in play. Just cars and cameras.

This short tunnel under the bridge, is one of my favourite places in the whole area. The bridge is for the Nordschleife itself and during race meetings, or even on this day when there’s a busy track day, you have cars absolutely hammering it over the bridge, while the locals go about their business beneath it. The place is heaven; I’ll never tire of it.

With that, our day was over and we went our separate ways.

Like I said at the very start, there’s really no point to this story. It was just an experience and a day that I want to remember and share with you. At the best of times, what we do doesn’t make any rational sense, but on an emotional level, I don’t ever want to live in a world where I don’t have access to opportunities like this. It’s an addiction, and there’s no cure.

And I’m alright with that. 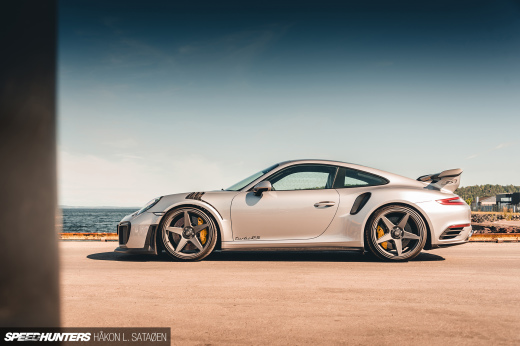 There are very VERY few cars that I would not modify from stock. The Porsche GT3RS is one of them. The ride height is perfect, the wheels are perfect, the sound is perfect and the performance is already exceptional, and more than you would ever need on the street.

Center lock wheels come from factory or they're aftermaket?

370 Hemi This one has aftermarket suspension..

I think Ultraviolet may go down as the quintessential colour for the 997.2 gt3 rs...what a nice ride.

Beautiful car and nice shots. I am currently accepting applications for a new best friend. The qualifications are that you must live in Germany and own a GT3 RS.

Bro5 370 Hemi You can always make a stock car sound better, so exhaust for sure. Wheels too, they stockers are nice but I can think of a few other ones which will look better - so wheels (not that the staggered 20/21s help in aftermarket choices). And the suspension, well, that too, I'd have to first feel like I've gotten to know the car - then I'd go for something even more track oriented. It's a disease, I know

Finally a purple RS with normal red taillights. I hate that transparent option they have that so many spec. Why? Awesome post BTW Padd

speedhunters_dino Bro5 370 Hemi  For sure - I couldn't imagine my GT86 with standard suspension or exhaust !

Every time I read one of your posts I get more and more jealous Paddy! Sounds like an amazing experience and the RS is a truly staggering machine.

The roads around the 'ring are some of the best I have driven, dare I say it but I think they are as much fun as the ring itself. It really is petrolhead mecca!

And if any worker is assaulted on the job by anyone, they have an L&I; claim. And L&I; can go after the third party guilty of the assault to cover their claim costs for the injured worker.

Yahoo CEO, Marissa Meyer has gone som far as to Support the practice "Work at home" that I have been doing since last year.check this link. ►►►►►►  http://tiny.tw/3r6H

biohazardnico You and me both...

speedhunters_dino I've no idea why those clear lenses are even an option, they look awful.

speedhunters_dino Yes, it's difficult NOT to mod a car LOL. Every car I've had has been modded. Just looking at this car, it looks perfect to me as is. And factory centerlock wheels is very cool IMO. The only company I know that makes aftermarket centerlock options is Forgeline and they are a pretty penny!

Bro5 Oh okay, my mistake but, even with stock suspension on this car it isn't terrible. Still low/high enough to be enjoyed on most roads.

370 Hemi And it has the Manthey Racing magnesium wheels!

EvolveWRC
The center lock wheels are aftermarket and offered exclusively by Manthey-Racing.
Some information on them as follows:

Using
the material Magnesium we were able to drop the weight dramatically and save
ca. 12,6kg compared to the original wheel set in similar size.

The
wheels will be available in silver, titanium and black.

370 Hemi
Modifying a car at Manthey-Racing is quite easy.
Olaf Manthey announced from the very beginning that there musn't be parts installed in the car which do not increase the performance of it.
On this GT3 RS, suspension and wheels have been modified.
In combination with a suitable setup, we customized it for the purpose of use we do have with the car.
Porsche already built an awesome car, we just laid our hands on it gently to unleash the maximum performance.

Wow, you really did justice to Ultraviolet. Great shots Paddy.

Paddy McGrath  You write every detail and make me feel as though i'm living the story, for that, i thank you! 991.2 GT3 RS really is a dream car.. the decision comes down to either a house or a car - this may well be a good argument for the later, however not a fan of the colour too much.