I used to prefix stories about British cars with, well, almost excuses. It almost felt like I had to have a good reason to feature such an uncool car as a Morris, a Hillman or a Rover when outrageous international fare seemed to be centre stage. But no more.

With a new generation realising the potential of domestic models, there’s an explosion of exciting machinery being built that needs no justification. One of the cars that I think is on the front-line is the humble Hillman Imp: a perfect platform for some reworking of the classic mod scene. They’ve always had a special place my heart. When I was young, one of my dad’s best friends was car mad, and was always running around in something insane. The car that really sticks in my mind was his Imp, complete with a lightweight alloy engine and lowered suspension.

It was cramped inside; the driving position from the racing bucket seat knees-into-elbows even for people of regular size. As for the back seat, thank god I was small. But it felt like a rollerskate crossed with a rocketship. It was so tiny, so low to the ground and just so quick. It held the road like it was glued to it, but then Imps do weigh next to nothing and have the perfect layout for go-kart style handling.

Robert Cumberbatch’s 1966 Super Imp took pride of place on the Imp club stand at the recent Classic Motor Show. It’s been beautifully built, with modern tech used elegantly without impinging on the classic original lines. I admired its previous iteration back at the 2014 edition of Retro Rides at Shelsley Walsh, so I’ve included images of it from there to show the car off in less apocalyptic lighting conditions…

A family love affair with Rootes Group cars made this project almost inevitable. Starting with a base Super Imp found in a shed, it’s been incrementally upgraded and improved, completely resprayed in this shimmering green with a full interior refit and fibreglass boot and bonnet panels replacing steel originals.

It’s all about the shape: three box in the literal sense, the flat deck line dividing the minuscule front and rear overhangs from the visually oversize greenhouse. Simple at first, there’s actually so much detail.

The straight line flash that defines the side profile is misleading, and is actually awash with subtle curves, from the raised eyebrows over the headlights through the subtle arch flares to the slightly tapering rear boot line. The racer-style ventilation slats just add to the raw look. The tiny Imp was a stalwart of the racing scene back in the ’70s, utilising grip and handling to humble bigger, more powerful machines. It’s what they’ve always been great at, on the road or track.

Engine-wise, this Super Imp has everything a right and proper hot Imp would aspire to: a featherweight 890cc sits in the wire-tucked and smoothed engine bay out back. With such a compact engine, there’s actually quite a lot of space in the bay and the engine sits impossibly low, further aiding the balance of the car. It’s been uprated with new valves, a GE2 race cam for lower down pull, mapped ignition, a Ford Edis coil pack, CBR600RR Honda throttle body with custom ram pipes, and DTAfast S40 ECU with Innovate wideband controller.

Banging down Imps is, of course, no new thing, but air-ride gives so much more flexibility. The Imp’s shape lends itself perfectly, whether utterly on the ground and cambered-out as at the CMS, or with that fraction of clearance that was on show at Shelley Walsh. A custom Air Lift Performance setup is at its heart: struts at the front and bags out back manage the height, controlled from a beautifully finished four-gallon tank mounted under the bonnet. With such small diameter wheels, there’s even still the space for the spare up front alongside all the paraphernalia for the air system.

The wheels – three-piece mag-alloy Ronals customised to fit the confines of the Imp’s arches and axles – match the classic look perfectly.

Small in size Imps might be, but if you want big presence these are cars to be seen in. It was a definitive highlight of this year’s Classic Motor Show for me, and the perfect example of the vibrancy of the retro scene.

The 2015 Classic Motor Show on Speedhunters 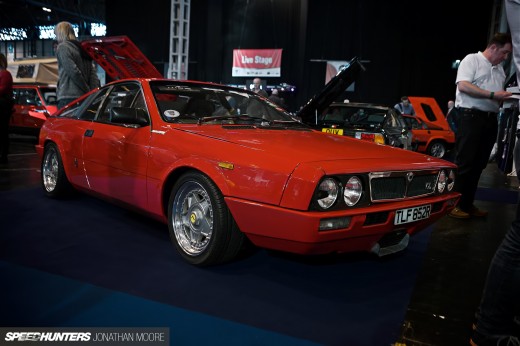 I Am The Alfa, The Beta & The O-Mega Martin 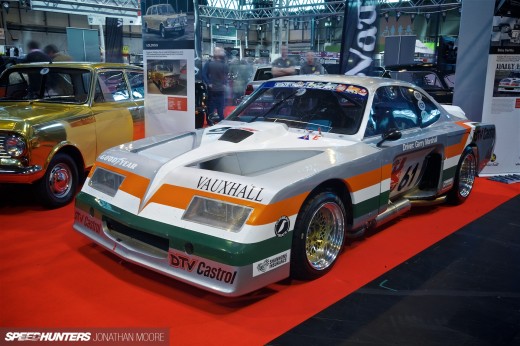 Baby Bertha Is Coming To Get You

Love the leather straps over the brackets on the air tank

Any car with a sticky set of tires will do! but i never heard of an imp.. lol, cool car.

Mmmm lifty uppy rear window goodness! A friends dad had an awful kit car (crusade?) based off an imp when I were a Lad, I don't remember it ever actually running... But this one, in its original form is lovely, and those arches are works of art!
I'm sure I've said it a million times now here but, The U.K. did small, lightweight with excellent handling so,so well when we got it right (imps, lotuses, minis and so on...) but all the good would usually be chucked out the window in the hopes of building costs being made cheaper. Eventually the bloody mindedness of boards of directors, accountants, union strikes and the ever present hunt for profit destroyed one of the greatest (and earliest..) car markets and manufacturer bases :(.
We occupy a small piece of land with teeny roads, bad surfaces and teeth, tight twisty corners, roundabouts and switchbacks, the Cars that are sold here should at least be able to handle those like they used to... (the fault in Fords "one market" plan? We shall see on that i guess...). But now they are mostly overweight Sofas with safety features and a drivetrain... Or far too big to experience at their best on the roads we have available. A Nation of Backroad heroes (fnarr) brought to our knees by mass manufacturing and accountancy.
The Imp was built for a very specific market and to fit a very perticular set of wants/needs, and it hit that perticular nail smack bang on the head. Just like the ford Anglia, lotus Europa or anything else Issigonis-esque from that timeframe.
Good to see one on something other then mini lights too.

cool car...really cool car!!
I can't help but think how a subtle chop would clear it all up

Bad teeth up your back alley? Speak for yourself TT!!

these sick stance people content with destroying golfs now there moving on to classics.

Haha no I meant the uk is a country of badly maintained roads and a nation of 'terrible' teeth (playing to the stereo type) - I am amused daily while I'm out and about watching very large, wide, overtly expensive, a lot of the time one of a kind cars trying to make their way around a lot of my local roads, running wide to miss potholes only works when the car has room to move into, not much use on a single lane, 1.5-2meters wide bit of road that's got 16th century walls either side of it that are aching to topple.
I'm grumpy about the fall of almost every domestic market but the Japanese one. We all get the same cars no matter where we are. You can even buy a Mustang in the UK from new now. What the hell is a mustang going to make (aside from a mess and rubble) of the U.K. Multi-storey car park or typical country road.

tedidesign Definitely a nice touch! I love little things like that. Fits the car well too!

Love euro retro sub sub compacts. It doesn't matter if its a Mini, Imp, or old Fiat. One summer in the future I want to travel to the UK and do some hillclimbs...say in an old Mini or Lotus Sunbeam or something.

I wonder how an Imp-Hayabusa would perform?

I prefer Honda based lunacy.
Like this for example: http://youtu.be/d3kqSAT1j_k

That's not even to mention the typical uk parking space!
FOOLS I TELL YOU! FOOLS!

it is such a good build, but is it just me or does front camber look horrible, the only reason there should as much as that is for drifting not for show. That is just my opinion, other that i really like this. Something with green on gold just looks good, and i really respect this build.

The reason for the camber is that the front suspension is of "Swing Axle" design. Normal suspension on the Imp is quite scary. In late 1964 and early 1965 I worked at a Roots Shop in West Los Angeles, California, and we regularly removed the "C" clips on the front shock absorbers (Stoßdämpferen) and placed muffler clamps about 30mm higher, in order to make the camber a bit less than was offered by dear old Lord Roots.

Very, very cool little car! I love it....great write up and pics too.

killer111 It looks far from destroyed to me. Better left to rot away, hey?

If you want to know more about Imps or the Imp Club follow this link:
http://www.theimpclub.co.uk

I have never heard of Imps until this article. I am now determined to own one with a liter bike motor in the back.

Don't drop a bike motor in it, just bore it out. That mill is a scaled down Coventry Climax engine.

DRiFTaddict Ah, that's just when it's fully dropped down – obviously undriveable in that config! The outdoor shots show a more realistic height...

jbfromsiliconvalley Yep, it would be a perfect summer. And I reckon that idea would be awesome

Option86 It's TINY! Height seems to be a real factor in cars like this: you could almost get over one in a stride! Yet once you're in the seat, it's just perfect – particularly a race version.

TarmacTerrorist Hehe, I was waiting for this, and it was worth it! Run for political office!

Jonathan Moore DRiFTaddict  i first i started looking at the car in both pics and thought it looked a lot different but i figured it was the different wheels and lighting, but that makes a whole lot more sense now thank you.

Imps are swing axle front suspension, that is the steering kingpin is fixed to the suspension arm and camber changes through the arm end's arc. So lowering them produces lots of camber change. Rear is semi trailing arm with similar properties plus some toe change.

I heard Hillman Hunters struggle to get to 80km/h