SHARE The Blown TRD Pro Tacoma Pushed To The Limit

I Love What You Do For Me

We try our best to cover a wide variety of motorsports here on Speedhunters, and a few years ago I dove headfirst into the wonderful world of off-road racing. I’ve loved every moment of it since, but if there’s one thing I learnt straight away it’s that to follow a race properly, a bona fide off-road chase vehicle is an absolute must.

At this year’s great Mint 400 race I wanted to go all-out and hit as many spots as possible during the one day race, and as it turned out this supercharged truck was the perfect chase vehicle for the task.

In an effort to make my job more fun and to create a sense of urgency, I like cutting it really close. What do I mean by that?

Well, let’s say I am following BJ ‘Balistic’ Baldwin – which I was during the Mint 400, as he was the leader for a large portion of the race.

If I did not have anything to ‘chase’ him with, I would only be able to shoot the trick truck one time per lap, which of course would mean that I’d only end up with a handful of shots of the race leader going full tilt.

But because I had the monster off-road worthy supercharged TRD Pro Tacoma at my disposal, I could just put pedal to the metal in 4WD and drive flat-out through dips, bumps, soft sand and the occasional mud puddle.

I quickly found myself taking more and more chances. Because you have to remember that BJ is going at race speed, which can be upwards of 150mph on the fast sections.

To continue cutting him off section after section is a daunting task.

There were those moments when I rushed as fast as I could – plowing through the desert and letting the Roots-type supercharger whine till redline over and over again – just to try and make it to the next spot before BJ came around, only to watch him fly by at full speed as I parked. It was such a challenge, but it was so much fun at the same time.

Lets rewind a bit. A few weeks before the race I called my friends at Toyota to see if they would let me loose in an FJ Cruiser. At last year’s King of the Hammers race they let me use a very capable 4Runner, so I figured it was only appropriate to test out the FJ next.

Well, they told me they had something even better. Currently Toyota offers TRD Pro editions of the Tundra, 4Runner and Tacoma.

Off-road-ready in factory form, the TRD Pro editions come with many goodies including upgraded shocks and springs that result in a mild lift.

But the truck that was offered to me was special in the fact that it also came equipped with a TRD supercharger.

Having a 236hp 4.0L V6 as standard, the regular TRD Pro Tacoma is more than capable of trashing some nice backcountry trails, but this supercharger adds 68hp and 68ft-lbs of torque to bump the output to 304hp and 334ft-lb.

This of course means the truck is perfect for dodging in and out of Los Angeles’ stop-and-go traffic – and breaking all four wheels loose on a dry lake bed.

The half-day drive from Los Angeles to Las Vegas was very comfortable in the Tacoma, and it handled great on the street as well as the highway.

As we made our lunch and fuel stops we would constantly get comments on the truck, and it definitely stood out with its metallic orange paint.

While the Tacoma was practically brand new when I picked it up from Toyota HQ in Southern California, it did not stay that way for very long.

It was actually a little bit embarrassing for me to drive around in off-road warrior looking all spic-and-span. It felt much better driving around the streets of Las Vegas after a mud bath.

So what makes the perfect lens mule vehicle? Well, it needs to have plenty of space for all of our Speedhunting gear.

The interior is very nicely appointed, with TRD bits – like the shift knob and floor mats – to remind you that you are driving something special. The seats are nicely bolstered too, and they kept my frail Asian body in place during our off-road excursions.

The gauges were simple and analog, just how I like it. I really can’t stand digital dashes.

While I would have preferred a manual transmission, I get that a 5-speed automatic transmission is dummy-proof for off-road newbies like me.

The 16-inch TRD Pro wheels looked fantastic, and I think the black finish works perfectly against the glowing orange paint.

The BFGoodrich All-Terrain T/A tires provided plenty of traction off-road, and they were not terribly noisy on the streets either.

The exhaust note is nice and deep, and every time you start the truck, it gives a nice growl. One thing I should mention is that this truck had to be run on premium fuel due to the addition of the supercharger. The 115V/400W deck-mounted AC power outlet came in handy a few times when our camera batteries needed charging.

Aside from the Ford F-150 SVT Raptor, I have not really noticed any manufacturers going out of their way to build off-road-ready trucks. But I can see why it would be a tough market to crack, because generally off-road enthusiasts want to build a truck from the ground up.

That said, I really think Toyota is headed in the right direction with these three TRD Pro edition off-road vehicles. They are only building 7,500 in total across all three versions, so hopefully they sell well, because I really want them to continue with this trend of awesome out-of-the-box trucks. 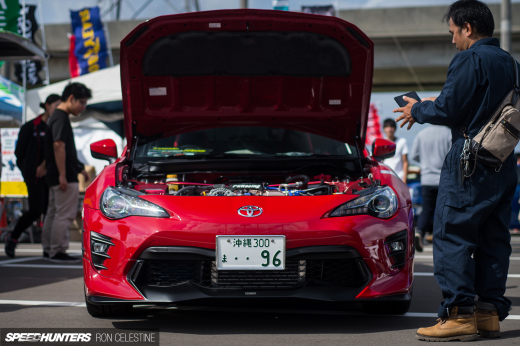 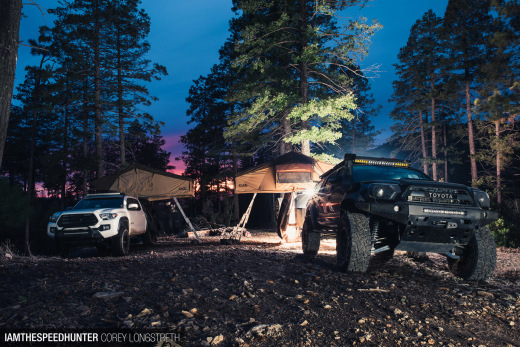 Into The Wild With The Rotiform SIX-OR

I really like this kind of off road articles, hope to see them more often. This Tacoma is bad ass, but I'm still waiting for that Ford F150 I saw with the RTR Mustang.

But that cover photo game me an idea ..
Are you (Any of the guys on speedhunter) going to do something like this with WRC ? Or rally itself ? You know, do photo shoots, make an article on that kind of cars..


I am from Europe and WRC and rallysprints are also quite popular here.. And I personally would enjoy such a level of photography and coverage on one of my favourite car related things in the world

lol did you guys forget it was supercharger month until like yesterday?? ;]

Wished they sell this in asia, all we get is the TRD Hilux

EvolveWRC So are we! The #funhaver is totally on the radar.

johnbezt The theme runs towards the end of the month, so technically we're all good


Frail be damned. You're 107lbs of pure bred athlete and I won't hear anything else!

Now, you can tell me that this "special" Toyota with TRD badges comes with a 4.0L engine and a supercharger with just 304 bhp? No, its not OK. It will be OK if they stop call it "special" and they will remove the TRD badge.

ChrisKutcher I've wondered this as well, there's certainly no shortage of classic rally cars that make their way onto Speedhunters, and I've seen a few GRC articles, but no WRC or Rally America coverage that I can think of. A guest article by a Rally America or WRC team would be very cool too, if one of the SH team couldn't make it out to an event.

greenroadster Toyota's antiquated 4.0L pig is one of the reasons why stayed away from a 4runner or Tacoma for the last few years. The power is a joke and the fuel consumption is terrible. Sure it's relatively reliable, but so are 1932 flathaeds is maintained. I hope they get rid of this engine soon. This truck should have a few engine options, starting with a 2.0L turbo, a v6 with adequate power (300ish) and a possibly a V8 option too.


Even Hyundai's theta 2L is putting out 265hp, albeit fuel consumption is not great...

The reason we don't do it more is because we try to do a bit of everything.

I have a crystal ball and it shows me a Cummins inside a Titan inside your garage for 2016.
I can't wait for the Frontier and Tacoma to get baby Cummins motors. Only a matter of time!

KootenayDub greenroadster If either of you had driven a 6 speed Tacoma then you'd rethink what you're saying. The 1GR is a relatively bulletproof motor. My truck even running 35" tires on my stock 3.73 gears will leave most cars off the line. Stock for stock I ran side by side with an Ecoboost F150. One thing people forget is that the Tacoma weighs less than a Challenger stock. My truck (double cab short box) was 3700lbs new.

KootenayDub It's a truck that's 11 model years old, that's why it has no power and has bad fuel economy.  Hopefully the next generation sets things right.

I love Toyotas more than the next guy honestly, but wow is that thing underpowered.. lol wtf

greenroadster The 2016 Tacoma is getting a 3.5L V6 with direct injection. Strong leanings point to it being derived from the 2GR-FE

Also, is it really a roots supercharger, not twin screw, I hope that's a mistake as it would be even more embarrassing if Toyota fitted a vehicle with a roots type charger in 2015!

I've driven one and it's slow.

Oddly enough I am in the process of finalizing my purchase of a black Tacoma for a DD/photo mule.  Great article to get me pumped up about it even more.

A 4.0L supercharged engine making just over 300 bhp? Is this will half the cylinders not firing? Seriously though that is pathetic.

@mike  you have never driven a Tacoma obviously. the 236hp 4.0 in the Tacoma does the same 0-60 and 1/4 mile times as the 15 model 305 hp canyon/Colorado. the 4.0 Tacoma with the Eaton Blower does a mid 13's quarter mile which wastes most everything on the road. don't get confused.

what Matthew answered I am in shock that you can earn $5020 in 1 month on the internet . look at http://tinyurl.com/dailyjobs04

Mid 14's with the blower. I've got one and with an afe cai, URD headers, smaller pulley and the truck is low 14's. In today's market it won't blow off several cars that are out there, but it will run with the 450hp raptor with a few more mods. But it will need about 340rwhp/425bhp to run mid 13's. some folks just spout numbers out their Hiney with no facts to back them up.