SHARE My Camera Is Bigger Than Your Camera: A Look At Global Rallycross New York

The story almost didn’t happen… After a crazy week shooting Gatebil Norway, we found ourselves at the airport on Saturday waiting for a nine-hour flight to JFK. We didn’t care that our flight was just delayed as the next day would be full of rest and preparation for a week of New York business meetings and photo shoots. But no… Rod posted on Instagram that we were New York-bound and immediately @saedwards246 asked if we were going to be attending the Red Bull Global Rallycross Championship event in town over the weekend. Of course this caught our attention, after all, any chance to Speedhunt must not be passed up. So after further investigation, we found out that Global Rallycross New York just happened to be a 30-minute drive from our final destination in Manhattan. Thanks to a quick call to the GRC live broadcaster, Jen Horsley, media accreditation was sorted in a few hours for Rod and I. So in typical Speedhunters’ fashion we geared up after a few hours of sleep and headed over to the Nassau Coliseum for the 9:00am Sunday morning photographers’ meeting.

So what about a creative approach for this day of shooting? Rod and I maintain that it’s always better to have a plan worked out in advance of picking up a camera. So rather than shooting from the hip, we sat down and collected our thoughts. Rod wanted to use his Canon set up and a GoPro for photography and thought to try switching back and forth over the course of the day. I then suggested to show the contrast of images and self limit to the best 10 shots. What we’ve finally ended up with is an article that’s part technical exercise and part photography experiment, with Global Rallycross NYC as the backdrop.

Rod: Of course, one could argue that shooting motorsports event photography with a GoPro is a bit of an absurd idea. There’s no viewfinder to see what you are shooting, and the lens is so impossibly wide that all track action is set into the deep distance. But this is exactly why I like the idea of GoPro photography. With the viewfinder removed, you have to relay on instinct and chance for your compositions. Which, with a bit of luck, will end up with some unexpected photographic happenings. Case in point: the photo above. No professional photographer would ever come up with such an interesting shot!

Elizabeth: Thank you, a bit of luck did come in to play as I did not use the GoPro live-feed app and just shot blindly. It was fun to assume I was getting amazing shots until I actually took a look at them on my iPhone. After the final practice round, I realized how to make this GoPro work for our article – by taking multiple shots at the same subject at different heights and distances.

Rod: Spray and pray basically… It’s such a small camera though, that one always places it differently than if one has a DSLR stuck to one’s face. That’s why I believe GoPro photography can lead to interesting results.

Elizabeth: As you can’t zoom with a GoPro, besides just walking closer to the target a shot like this would be impossible to capture from behind the fence of the track.

Rod: Bigger is better right? Just think about how amazing this shot would have been if I had a 600mm lens instead of a 400mm! Kidding aside, I don’t have a sports camera though, so have to shoot my shots carefully. The approach would be quite different if I could fire off 15 frames per second here. That said, I think it’s an important photographic skill to be able to pick the exact moments to press the shutter release, even as crazy action is unfolding around you.

Rod: Crispy! Today was the my first attempt to shoot flying cars… Elizabeth do you think Larry will approve? He’s so busy being a dad now, someone has to step up to the plate right?

Elizabeth: Wow, first attempt! How old are you? Larry’s baby already has a ‘how to’ book on shooting flying cars. Larry please provide feedback below. We are all your students.

Rod: Just try and guess how old I am… No one can.

Rod: I’m quite amazed with the latitude of the latest GoPro’s camera sensor. For such a small camera it’s quite amazing how well they expose between lights and darks. But the native JPG format will never quite be able to match the results of  the RAW file format on a DSLR.

That said though, with some creativity, one can always come up with interesting results. I have massaged Elizabeth’s image here in Adobe Lightroom and cropped the composition, but overall, I’m happy with the result. This shot was very much completely spontaneous. We were in the middle of a business meeting with a marketing agency and grabbed the image on the GoPro without any consideration or preconceived thought. I like the freedom of this approach.

Elizabeth: We were there to catch Tanner Foust in action on and off of the track. This line formed as an impromptu autograph session started and not surprising the ladies love the American stunt driver/tv host/racer/drifter/blue-eyed man. This lady was quite fond of his ‘marker’ and allowed him to take it to her chest for an autograph. I love Tanner… but maybe not that much.

Rod: I do appreciate that Tanner always has time to give me his full attention whenever I bump into him. I’ve known him a long time, but even as his star has risen, he’s always remained friendly and open. Oh, I should also mention that he won the event, right?

If you really look at the above set of images, we have two DSLR shots shots and two GoPro shots. I’m sure you can see what is what. With a little colour grading both sets of images tell a bit of a story.

Rod: We also spent some time hanging out in the Hoonigan Racing Division paddock setup with the crew, although didn’t see Kenny from the Block at the time. Too bad!

In this image you can see just how the camera sensor on the 5D Mk III combined with RAW format allowed me to expose both for the dark foreground and the bright background.

Rod: Speaking of Ken Block, I eventually did see him on the start line and reached into his cockpit with my giant 400mm lens. I run a polarizing filter which allowed me to cut enough reflections on his window to peer into his private, pre-race-start world.

Rod: Although I attended a GRC event at the SEMA Show last year, this was my first time with a camera in hand. As the races are so short – five to ten laps depending on what type of heat or final – I found it quite a frenetic challenge to stay abreast of the action. There’s literally things happening all over the place! One second I had a fast shutter dialled into my camera to capture a rallycross machine in close quarters…

Rod: …And the next I had to switch modes to practice the art of slow shutter pans. I’m actually quite proud of this shot. If you look closely you can see the hot air coming off the back of the airborne car. If you can’t see this, try our full screen viewer to see Rhys Millen’s Veloster in all of its high flying glory. Remember, all the shots that Speedhunters’ photographers publish on the site these days are desktop resolution.

Rod: So that’s all from Elizabeth and I right now. This is a bit of a quick article, but as our day out was completely unplanned we though it best to take a different angle and explore a Red Bull Global Rallycross event both visually, and by pushing ourselves creatively.

Elizabeth: Next time I get the DSLR… 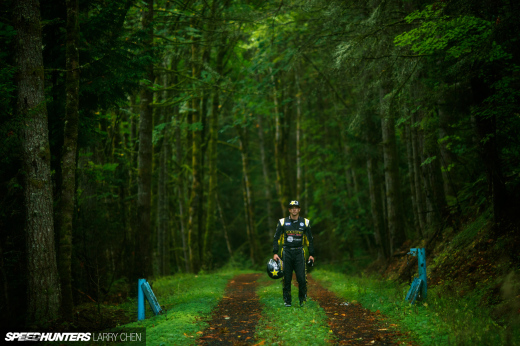 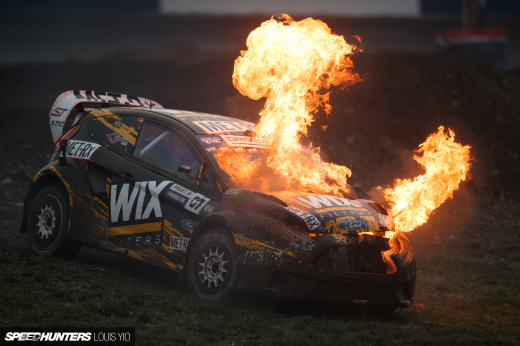 lol! hilarious commentary...larry may say something else, but I for one quite like the in-air-exhaust-panning shot! Also the gopro shot with tanner looking into the camera is interesting as well.

Love the commentary between you two. It's like we are sitting there as both of you guys are going through the shots for an article and discussing them.
Great idea! Would like to see more of this.

Love this piece, I've caught myself smiling more often than usual reading this

Thanks. We are Speedhunting the States now...more commentary to come.

An engaging article and different in a good way - It is great that Speedhunters is developing another area of focus/direction these days in terms of subjects and style - still keeping it real on what got your here, but also expanding what you do and how you do it - I find myself sharing the site with more folks who might not have been interested in SH before.

Keep up the Mo'

Thanks for the feedback!!

Fun article, I liked the comparison between the DSLR and GoPro. I shoot with both as well and they are completely different experiences. Because of it's size the and durability you can take risks with a GoPro that would be a bit sketchy with a DSLR; such as attaching it to vehicles down low near the road, hanging it on poles (or a kite) for super high angle shots or shooting in poor weather. I also found that extracting frames from 4K GoPro footage is actually better in some cases vs the still camera mode especially for fast motion.

There is no better tool here, they just have different strengths. The GoPro is so small that it's easy to include in a camera bag so even if you are primarily shooting with a DSLR you can always shoot some shots on the GoPro either for video reference or simply to get a different look as you all did in this article.

As for the wide angel limitation on the GoPro...well as photographer Robert Capa once said "“If your pictures aren’t good enough, you’re not close enough.”