It’s not often I quote from a TV series, let alone the A-Team, but I love it when a plan comes together. Here at Speedhunters, we cover some of the same events year in, year out but we always try our best to bring you not only the best shots but also a unique angle on the happenings every time. As part of the pre-event planning, many story ideas are formulated and discussed, while we toy with different ways to bring the experience to you, the reader; the aim being to always make you feel like you’re sharing our journey besides us.

Of course, when the event in question is Gatebil Rudskogen, it’s the finale of the Speedhunters European drift tour and there’s going to be not just one, not just two but three Speedhunters drifters in attendance, then those plans have to be good.

We’ve used car-mounted cameras before but we thought what better way to get right in on the action than to put a Speedhunter right in the car with the drivers? In fact, let’s put one in each car! Travel sickness be damned! Up in the hot seats were Paddy in Vaughn’s Mustang, Taryn in Mike’s BADBUL RX-8 and Gatebil veteran Egil Håskjold in Fredric’s 86-X.

But though that would give us the perfect view of the action from the driver’s perspective, of course we also wanted to know what it would look like from the other cars. Sivert Naas came to the rescue, providing the chase car that Larry Chen would jump in the passenger seat of, posed to capture the action.

Of course, we also needed a complete outside view of the action, so Bryn Musselwhite headed trackside and the Rodbot was dispatched to the top of one of the rocky outcrops that divides the circuit.

Now we just needed the small matter of some drivers: Fredric Aasbø, Mad Mike and Vaughn Gittin Jr. Of course this was Vaughn’s first time at Gatebil, so their first run out together in traffic was no small occasion.

So, plan formulated, Speedhunters were dispatched to their assigned positions, cars fired up and the clock began ticking down to the drifting sessions. The stage was set…

It’s at this point that I should perhaps take a step back and set the scene a bit further. Gatebil’s renowned for its crazy on-track antics anyway, but after the three drivers had been keen to start winding each other up about the action weeks ago, there was everything to prove.

So the cars set off, warming up and getting used to the track, before one lap in, the craziness began to ensue. Early entries, insane angles, and huge blankets of smoke. It was just as we’d hoped – the guys were perfectly placed to get some amazing shots from in-car…

… as well as the chase car and trackside.

In fact, the guys were battling so hard out on track that the wing of Mike’s car even knocked against Fredric’s window!

We thought we’d set the stage for the perfect shots, but we could never have imagined what would happen next… About four laps in, one of those amazing moments occurred. Something you just can’t plan for, but always hope to capture. After rounding the first downhill corner, Mike and Fredric had pulled a little bit ahead of Vaughn, who had the incorrect gear ratio set up on his first proper run. Involved in a crazy chase battle through the traffic, Mike and Fredric rounded the corner to find a BMW making its own way round the track.

Did they slow down? Of course not! Fredric held to his motto of ‘Hold Stumt!’ and piloted the 86-X round the outside…

… only to round the bonnet of the BMW and have Mike appear from the inside!

And there you have it. Drift sandwich!

If all these amazing shots weren’t enough, Speedhunters’ friend Luke from Zero Media was perfectly placed to capture some video of the moment…

That’s what I call a plan coming together. Now where’s my cigar? 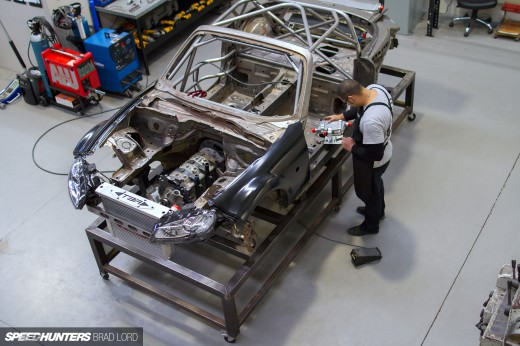 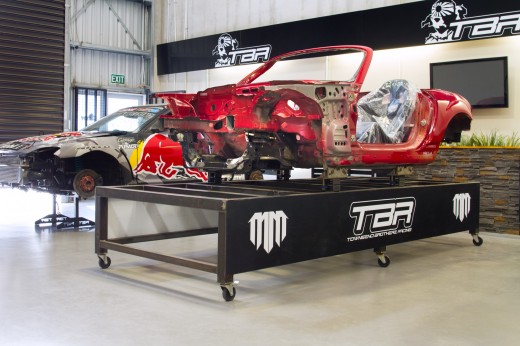 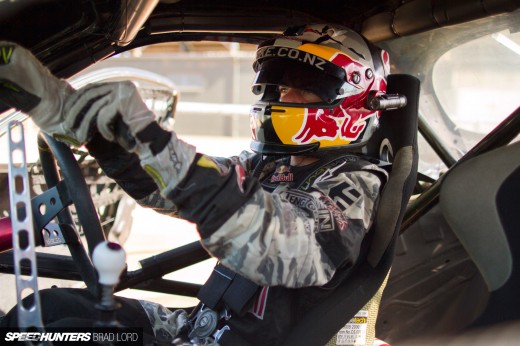 Mad Mike On A Mission