I’m going to move swiftly along with another look at some of the cars of Slammed Society Japan, and trust me there is so much to see I could post images from the show for the rest of October!

While Japanese cars obviously make up the majority of the vehicles present, there are always some imported gems mixed in too and it was this E34 wagon that I personally really liked. Aside from the fact that I have a strange attraction to station wagons, there was little this big 5-series was doing wrong; clean was the name of the game here, with a nice set of 19-inch Work Meister M1Rs taking care of the visuals along with an appropriate and aggressive lowering. Check out the big brake kit up front too.

The winner of last year’s Hellaflush Japan event in Fuji has swapped his old E46 320i from an M3 but has gone for a similar blistered fender look and those same very shiny Work Equips.

Car Craft Boon, the guys behind Osaka JDM never miss any stance-driven event and came up all the way from Osaka with a few of their customer cars including this yellow EK9 we first saw at Hellaflush Kansai in May.

There were plenty of Civics, all uniquely different and most of them sporting quite a lot of work in the engine department too.

The owner of this EG Civic drove all the way from Kagoshima to participate in the event, that’s a 1,400 km drive which took 14 hours. Talk about dedication!

There were tons of S2000s at the show too and you can expect to see one in the spotlight-o-rama I have coming up next.

…or this slammed R32 on older Rays.

What I like about kei cars is that most people seem to go really crazy with them! This Daihatsu Mira for example really tried hard to stand out and was even displaying a rather large Speedhunters sicker on the windscreen. I just had to grab a few shots!

My favorite however was this Daihatsu Charade 4-door slammed on Work Meister CR01s. Absolutely awesome!

I’ve seen this N-Style Soarer at tons of events in Nikko and various shows like the Nagoya Exciting Showdown. Makes me stop and have a closer look every time.

I have to give some love to rotaries too, but there were only a few around like this pink FD…

…and this rather nice FC.

Looking certainly has its very own distinct style, and this Sileighty was the perfect example with two-tone paint job and big 20-inch chrome wheels. Only they can pull this kind of look off successfully.

…yet another car from Review…

To finish up this nice Silvia line up, a 326 Power kitted S15 from Hiroshima.

I’ve been meaning to give my own Legacy wagon a much needed-refresh in the wheel and stance department, and there was plenty of inspiration at Slammed Society. However I had no idea anyone would go this extreme with a Legacy…

…just look at this thing from the back! Crazy…in a very good way!

Here is another example, with slightly more street-friendly offset and negative camber.

It was cool to meet up with the MotorFix guys again, it’s only been a few months since I visited them at their shop in Gifu…

…but they have already completed, well sort of, their Carina wagon project. This car has been sitting outside the workshop for years, and it certainly looks it…except it’s all part of their look.

Sakai-san prefers to pay most of his attention to the oily bits and one glance under the hood and you are sure to be left with your mouth wide open. The naturally aspirated 2JZ, now sporting velocity stacks, looks awesome sitting in the spotless and freshly painted engine bay.

It looks like the car has been fished out of the bottom of a lake or something! Work Meisters and big repainted Toyota calipers are a nice touch.

Here is a bit of a gem, a B110 Sunny looking like it’s ready to hit the track!

There were only two trucks at the event, but a must have addition because there is a huge custom truck scene in Japan as we usually see at Mooneyes events.

Altezza on BBS. Simple and to the point.

I’ll finish up with this shot of a Nissan Mach running Enkei 92s, a wheel that is quickly becoming a popular choice for those that want oldschool looks but the quality of construction of a modern rim. Next up it’s the spotlight-o-rama…don’t miss it! 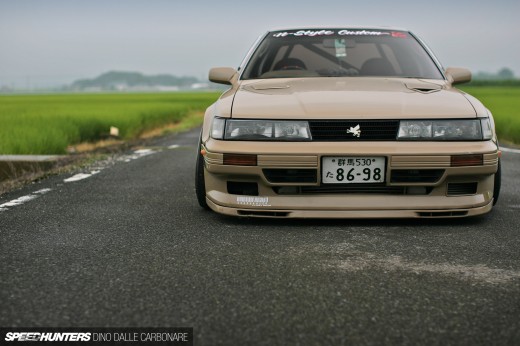 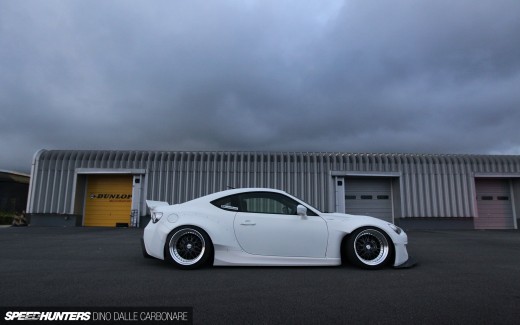 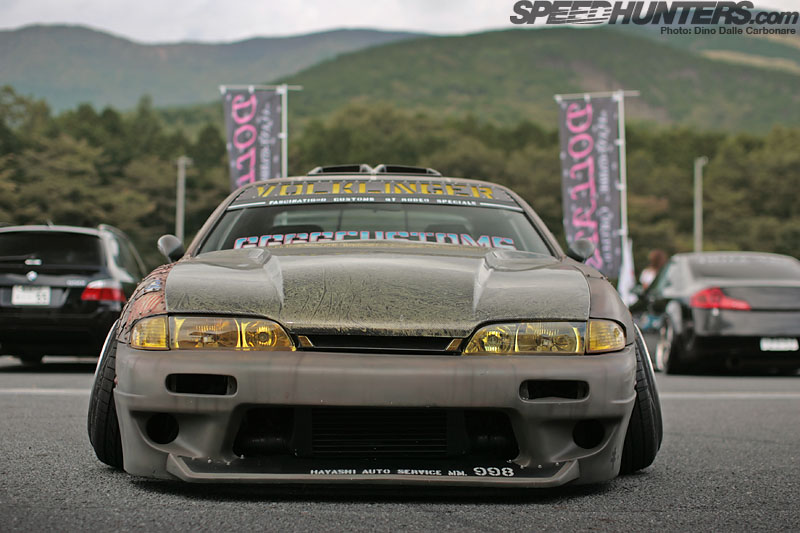 so many nice cars, love the dingy on the motorfix carina, no bikes here

and also, the lights on that yellow impreza look to be jzx100 mkII items, are they or were they custom jobs if you have any info

Those Legacy's. Hopefully my 92 turbo can look as good as those eventually!

Some awesome rides except those useless "megacamber" ones imho!

@Maxmax1 its not useless, they can lower the car even more or fit bigger rims under it with camber

S2000's always look sweet lowered like this and with the accentric rims, and the R31 just looks awesome. But I completely agree about the Daihatsu Charade's look; very clean, simple and simply perfect build.

Man, what a show! I wish I could have stayed in Japan long enough to attend it. Guess I'll have to get a job there and move. A customized kei van would have to be my ride, to snake through those narrow neighborhood streets. And is that a slammed Probox I see behind the brown Corolla wagon? The Japanese will lower anything! My favorite of this round is the Sunny. Perfect stance and look!

Oh! A Pignose. My favorite by far.

@EricSeanDelaney I concur. Spotlight on the piggy maybe?

@FunctionFirst That's what I'm hoping for!

Is it wrong that I'm now pricing out Legacy wagons?
So practical, but it can look really clean. Also insurance should be cheap...

Lovn the motofix crew, they got a rad look going backed by some serious fab work!

@sean klingelhoefer I agree. That sunny looks like it would be a blast to drive.

Oops! At first glance I thought that B110 was a Mark 2 Ford Escort... (which makes me wonder though, there must be some Mark 2 Escorts in Japan...) Love the Carina wagon as well.

Brilliant work as always, thanks!

That yellow S14, oh my god! My favorite car in a while.

That R31 GTS is actually an R31 GT Passage, sporting a GTS grill and aftermarket bonnet I believe. Pillar-less and four doors are the giveaway. Awesome coverage, keep up the good work!

"I could post images from the show for the rest of October!"
Please do! Haha

Please can we have a desktop of that E34 wagon. Its the best looking E34 I have ever seen.
And that B110 Sunny is just all kinds of awesome.

In love with that Mercedes, perfect wheel combo in my book.

@Mat81 It's sporting the gts interior and is probably actually a 4 door gts. The hardtop gts is more of a sports oriented sedan as opposed to the luxury image of the passage.

R31 is just awesome, and that B110 is so sweet it hurts! Great coverage Dino!

@Miguelone  @Mat81 Cool, been a while since I frequented the 31 forums, thanks for the info. Great looking car either way!

@EricSeanDelaney  wanna buy mine? i  effing hate it.

@EricSeanDelaney  wanna buy mine? i  effing hate it.

@EthanGuzzi   I already have one, If I had room and money I'd be all over it.

Ah yeah, the E34 bimmer & Legacy looks amazing. Also loving the Carina with that spotless 2JZ-GE VVTi. Damn, so much to see, too much to comprehend, lol!

I really love the pictures and the work that is being done there,please send me some information on how to go about it am gonna make my self the best engineer too,keep up engineers.