For the past seven days, I've been tooling around the Los Angeles area in a 2010 Mazda RX-8 R3. Even seven years after it was introduced, the RX-8 is still one of the most unique cars on the road, and despite some drawbacks, it offers a driving experience to match.

Prior to this it'd been a long time since I've driven a rotary-powered to car, so I was quite giddy when I got the keys to the Velocity Red Eight. Not that the normal RX-8 is a mainstream car, but the R3 is the choice for enthusiasts, offering upgraded suspension with Bilstein shocks, forged 19" wheels, and unique exterior and interior pieces.

After letting the car warm up, watching the redline gradually move up to it's 9000rpm point after a couple minutes, I stabbed the throttle for a quick burst up the street. There wasn't a whole lot of power (the 1.3L Renesis is rated at 232hp and 159 ft lbs of torque), but the power delivery, and the sound of the engine are awesome. It was something I'd become addicted to over the following week…

And unfortunately, the temptation to rev the rotary leads to a big penalty at the gas pump. The car is rated by the EPA at 16MPG in the city and 22MPG on the highway, but that's with conservative driving – something very hard to do with a rotary so willing to rev. With the way the car drinks premium fuel, I have to say there were times I wished for more power. This chassis would be magical with another 50-60hp.

Still, the car is a hoot to drive – and the response is unparalleled. Last Saturday afternoon I took the RX-8 for a cruise on the famed Mullholland Drive to get an idea of it's driving dynamics.

In most cases the road was too deteriorated, and the traffic too dense to do much spirited driving, but it was still great fun hustling the car through the corners – even at legal speeds.

There are also plenty of great views to enjoy up on Mullholland. This is looking out on the San Fernando Valley to the north.

…I even did a bit of car-spotting up there. One find was this vintage Alfa.

Along with this well-used 911. And I thought the RX-8 was a fairly compact car…

Even with the traffic and obliterated road surfaces, there's something about special Mullholland Drive. You can almost sense the spirits of Hollywood's playboys blasting around the curves in their sleek machines…

I spent a lot of time driving the RX-8 on the freeway, and found that like most cars with serious suspension – it's not the smoothest riding vehicle. Then again, I'm used to driving modified cars so it wasn't a big deal for me.

Besides its rotary power, one of the RX-8's most distinct features is the rear doors, which give it added practicality over other cars in its class.

None of my friends wanted to squeeze back there try it out though. Maybe I should find some shorter friends? I imagine it'd come in handy for small children though. 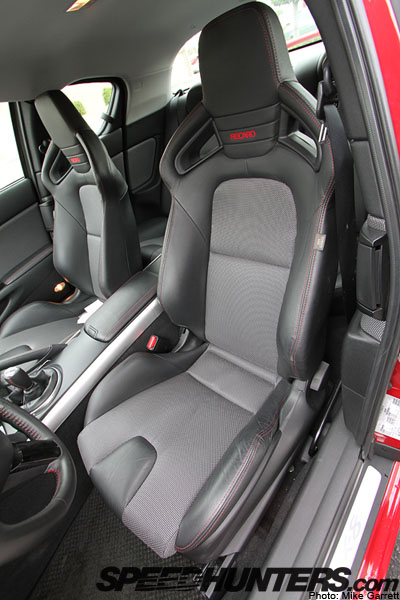 Without a doubt my favorite part of the R3 package is the Recaro seats. They look awesome, and a do a fine job of keeping you in place.

They were a little tight for my frame at first, but I got used to them after a while. You wouldn't think seats like this would be approved for a US market car, but it goes to show the Mazda is serious about the driving experience. You have to respect that.

The big 19" forged wheels also got a lot a compliments, with the gunmetal finish standing nicely against the red body.

What I like most about the RX-8 is it's character. The looks, the sound, the tight feel of the six-speed. It doesn't feel like your typical sports coupe, because it's not.

While rolling through some the ritzy areas of LA I even noticed a few Porsche and Ferrari drivers giving the RX-8 some approving looks. I'm not sure if that would happen in a run-of-the-mill G35.

So, if you can live with the car's thirst for fuel and lack of big horsepower, the RX-8 R3 offers one the most engaging drives around.

Here's hoping Mazda will bring more of the same with its next rotary sports car, hopefully with a little extra power for good measure.

All Hail The Demon King RX-7

Although I'm not a bit RX-8 fan, this version is soooo outstanding,finally as aggressive as it should be.

I love anything that is rotary

you sir made my day!

I always felt the RX7 is a S2K for people who don't want a drop top and want 4 seats.

Mazda does know how to build good sports cars.

I cant wait for some nicer weather so I can really drive my 8 around STL again.

no wai i used to drift wun of these.

Face lifted version has really made the RX8 lines shine.

Massive improvement over the original in my book.

I really like how these cars look, but everyone is always commenting on the lack of power. And apparently they are also pretty difficult to modify (engine-wise)?

Mazda should add a turbo in there... please do it Mazda

does the r3 actually have that much power or is it seriously over rated like the original?

it sort of sounds like this was sponsored by mazda, so i understand the lack of the massively over rated power figures; but c'mon speed hunters. keep it real.

I really love the design of the 8, the rev happy nature of the engine and all that but I couldn't agree more that it really needs even another 30-40 horses to make me choose it over Nissan's Z. For that type of gas mileage, at this point in fuel economy technology I expect a hell of a lot more HP and down right grunt. Still, its really fun to drive and good lawd the noise!

I have been wanting to drive the R3 for so long. Car looks so sexy.....ill just keep dreaming.

I hate how the new Mazdas have the front end look like its smiling. it ruins it for me

232 hp out of a 1.3 liter is outstanding, gotta love rotary power

hey hey hey easy on the G-bashing. im sure ferrari and porsche owners would give some approving nods to a G35 that was done right, or a run-of-the-mill G37...

eh nothing to reach the tissues for...

drop the Wonka drop in an SR and now were talking!

but still nothing to really sweat.

It's a cool car, but I think the Renesis was a mistake. It was supposed to be the most fuel effecient rotary, and it's basically the worst. The FC turbo gets better mileage with modifications! I know, I have one! Going for the 9,000 rpm redline, triple-stage dynamic intake killed the mileage.

I really hope Mazda learns from this and builds of the RX-7 rotary instead. Reasonable rpm and TURBO!!!!

throw a turbo on it then it be fun

going to the petrol station won't be though lol

i own one of these... their pretty cool... my convertible is 10lbs. heavier than this(R3 weighs 3050lbs.), with less power.... so i can appriciate how this vehicle is designed. after having it on the track, this vehicle will make you smile.

My thoughts on the car, it has power but you need to keep the revs high. It is not like an e46 M3 that has decent power in the lower revs, and OMG power in in the higher bands. It is alot like an s2000 actually. The car is still ugly from 90% of the viewing angles, and no one wants to work on them. Rotary guys do not like the new engine, and Mazda dealers know nothing about rotary engines. I'm sorry but I keep this car on the list of cars that have little reason to exist. It is headed by the ML63 AMG then this car. Sure it has power way up high in the revs, but feels underpowered under normal driving situations. For the price there are better high strung cars out there, that are easier to maintain, and look way better.

I love this car, its not for everyone but it has a place for me....one day when I can afford the gas for it.

What's wrong with those seats? Why aren't they approved for the US?

They are approved, he said you wouldn't think they'd be approved. And simply because the US is full of fat people.

The RX-8 is an addiction. I am on my second, 2008 Anniversary that does have the sport tuned suspension. Once you experience this car's handling you are hooked.

Yea, i own the R3 one, but black in color. how i wish the car got more power, even a single turbo will do fine!

btw, the back seats are good enough for a full grown Asian adult, for others, not sure :p

The Rx8 is a car for driving pleasure enthusiasts. !

The new R3 is a sort of official Mazdaspeed version of the original Rx8, it is more agressive and seems to gives a little more feedback than the first version.

For me it is the proof that the car has been really well build and is still one of the best in it's class even if all of us would love to have 280 hp instead of 231.

For those who think power increase is difficult : just put a midpipe and reprogram the ECU with Cobb or Hymee and the car changes caracter with alot more torque downrev and more redline, it is fantastic ! No need to change anything else.

The rx8 chassis would achieve utter perfection with a 3-rotor engine, then it would be one of the best sport cars in the market. I understand production would be more expensive but I would not mind paying $45,000 for a car that has great looks and enough hp and torque to back it up--- and have you heard the 3-rotor engines? they are mesmerizing.

Mazda should at least make a limited run of a 3 rotor rx8 or offer the choice to upgrade the engine for some premium.