What’s the best part of car ownership? Spending hours in the garage tinkering away like Ryan? Buying broken German tat like Mark? Restoring the perfect Tokyo daily like Dino? Sure, that’s all good, but for me I would have to say it’s the driving.

So naturally, my favourite part of photographing cars is the rolling shot.

Automotive photography wouldn’t be the same without the rolling (AKA tracking) shot. I think it captures the spirit of the beast as the master of its domain, out on the open road. Often, it’s the hero shot on magazine covers, and for good reason.

Tracking shots involve having the camera and the subject car traveling together along the road, and taking the photo using a slow shutter speed for surrounding motion blur. The easiest way to do this is for the camera operator to be in the back of the tracking car shooting the subject car. These shots take a lot of practice and a few people who know what they’re doing to make it work.

At a minimum you need three people: one person driving the tracking car, one person driving the subject car, and last but not least, the poor camera operator hanging out of an open tailgate or window. Trust me, it’s not easy, comfortable, clean or relaxing. It is, however, the best fun you’ll ever have and extremely rewarding when you get the shot.

This shot from the Low Brain drift day was shot by hand, sitting in the back of JJ’s S13 Silvia. I swear I’m now missing a vertebrae.

But what do you do when you arrive in a foreign country with no car and no friends? Well, initially I had to take trains to every shoot, and arrange drivers and cars which was a logistical nightmare. Eventually I bought my Impreza and decided to build the camera rig you see here.

Most of the components are from Small Rig, great kit which is reasonably priced and really well made. The suction mounts are from some random Japanese company I found, because all the mainstream brands like Manfrotto cost an arm and a leg, and I need all of mine.

So how does it work? Well, the camera is triggered from inside the car while I drive in front of the subject car, so I’m essentially doing the job of two people.

It’s definitely much easy shooting these rolling shots with three people because you can adjust the camera angle on the fly, whereas the camera rig is always fixed in one place for each run. This is something I need to work out and get quicker at adjusting, and of course practice makes perfect.

These shots from Okutama were my first rig shots, and I was terrified of the suction mounts coming unstuck. Luckily no Porsches (or camera gear) were harmed in the making of these photos.

I now have the flexibility to shoot rolling shots at any time, any place. The rig is a bit of a hassle to setup, but it’s well worth the effort.

Well, there it is, a behind the scenes look at how I get my rolling shots when I’m all by myself. If you have any technical questions about my setup, feel free to send me a message in the comments section below. 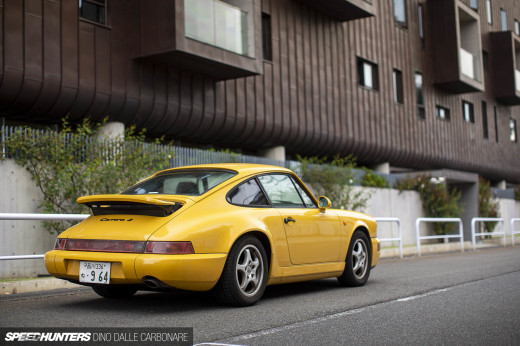 Is that SA22C going to be a future feature?

Do you have a screen in your car aswell? Or do you "guess" the distance for the good shot/focus.

That would be the dream, and I probably could set something up, but it’s just another thing to worry about. Both the hero car and I know what distance we need to be and a guess gets us close enough!

So comunication is key then. I guess keeping it simple is sometimes the best route. Thanks for giving us an insight in the world of roling shots!

No duct tape? For shame!

It leaves gunk on the paint

Could you talk about your camera set up as well? Thanks

Now I'm going to take my mom's Camry, stick a camera on it, and use it as a camera rig

Would that be a camera rig or a CamryRig?

That was cool. But why don't you just drive the vehicle with one hand and stick your iPhone out the window with the other like everyone else does?
...kidding!

This story came in perfect timing as I have just ordered suction cups and other bits in the past week! Very keen to start experimenting with it. If you wouldn't mind, I've got a few questions:

- How are you triggering the shots? Do you just set the camera on a time-lapse function and reposition yourself from time to time to get different shots?
- How do you deal with focus? Auto AF or set manual focus to predetermined distance with high aperture?
- I noticed the string around the camera, is that a backup in case the cups come loose?
- Any issues with vibration showing in the images?

Hey Frederico it's being triggered with a wifi remote, pre-focused and yes the string is a safety measure!