Tim Abbot is a highly respected Porsche restorer in South Africa. We’ve previously taken a look at his shop – Abbot Cars – and Tim’s shop hauler – a very cool Porsche-powered VW Bus – but today I want to show you his daily driver. Of course, it couldn’t be anything other than an old 911.

In the classic Porsche market, having a pristine condition car makes total sense – that’s where the money is after all. But not all Porsches need to be, or should even be restored, though.

Kermit is Tim’s everyday car, and it’s far from perfect – just as he wants it to be. The exterior paintwork has a few cracks, dents and chips, but all that means is that this 1988 3.2 Carrera has had a great life thus far.

Yes, an ’88; Tim has back-dated his Porsche, giving it the feeling and look of a ’70s 911, but without the headaches that often come with older classics. No, being an ’88 does not make this car modern by any means – this was one of the last 911s without any nanny aids – but the overall driving experience is improved all the same.

The front bumper, fenders, indicators, horn grills and front bonnet latch were all changed to pre-’73 items, a long bonnet was fitted, and the window frames and beadings were anodized in a bright silver finish. The custom bash plate and Hella spotlights are a nod to a rally style that underpins the entire build.

To complete the back-date transformation out back, a pre-’73 bumper and tail lights were fitted, and the rear prestige panel was removed.

After raising the suspension for extra ground clearance, some meaty tires were chosen for this go-anywhere 911. The 15-inch front Porsche ‘Cookie Cutter’ wheels are wrapped in 195/65/R15 rubber, while the 15-inch Minilite rears wear 215/60R15s.

To me, the mismatched wheels only add to the car’s personality, something helped along by the stickers around the bodywork. If you caught my Abbot Cars story, you might remember that Tim cut his mechanical teeth in the Shell service station/workshop that his father owned in Johannesburg, so it’s only fitting that retro Shell pecten logos were included.

And the bike? You might also recall that Tim is an avid cyclist, having even represented South Africa back in the day, so the wooden roof rack for his prized vintage Gemini road bike from the ’80s is a neat touch.

Pop open the back, and you’ll find the 911’s original Motronic-controlled 3.2-litre flat six staring back at you. The engine is backed up by Porsche’s venerable G50 5-speed gearbox.

The interior remains original, meaning it’s all-’80s inside – big-vent dash and high back seats included. Here’s an interesting fact if you’ve ever wondered how to spot a 3.2-litre car without opening the engine compartment: This pattern on the gear knob was only found in 1987 to 1989 3.2 Carreras.

Tim built this 911 to be driven. Nothing is done for you; you’re in total control; your driving skills determine how the car performs. In other words, it’s perfect.

He’s owned countless Porsches over the years, but Tim says that Kermit remains his all-time favorite. It’s not hard to see why either. 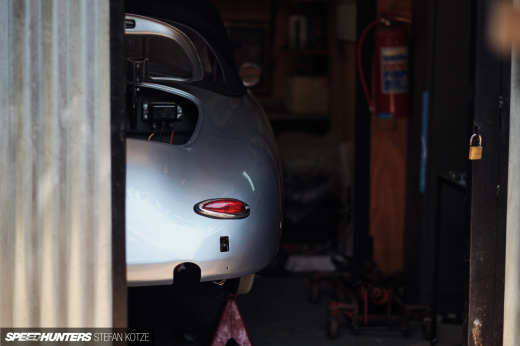 Sometimes Being Broke Has Its Benefits

The kermit green porsche's wheels seem rather clean after been driven through dirt. The wonder of tire shine I reckon.

Porschefile for life! Also a former cyclist. Rode 100,000 miles on my Bianchi. Only blue Bianchi in the entire United States. Great writeup!

For me, personally, I couldn't live with the mismatched front/rear wheels. But I love everything else about this build, including the lovely cracked and beaten paint. It's an awesome ride!

Cool old car, and looks like there are some good dirt roads out there for having fun.

Surprising to see some of the automotive scene happening in Africa. One would think they'd be more worried about dealing with Malaria and civil wars instead of playing with old cars!

Malaria is only a problem in the far north, and as for civil war...don't think so!