SHARE The Strongest Start To The Festival Of Speed

There’s nowhere in the world quite like Goodwood. And Goodwood is at its best when it’s Festival of Speed weekend, and the sun is shining.

In years past, the Thursday before the FoS has very much been an ease into a hectic weekend of speed, and has been mostly frequented by the press wanting to see, touch and drive the latest production and prototype models.

Not this year, it seems.

I must have missed the memo, and I certainly missed half the day having arrived at lunchtime after being stuck in traffic all morning, but still, this afternoon the Festival of Speed well and truly kicked off.

There was the usual unveiling of prototypes and the like, including the very design-conscious and really quite sexy De Tomaso P72. Best of all, it has a manual gearbox. Oof.

While there wasn’t as much racy ‘stuff’ going up the famous hill as there will be over the coming three days, there was still plenty for eager eyes to get their automotive fix from.

FoS is an unrivalled, completely over the top, extravagant and opulent celebration of automotive enjoyment. It’s the one weekend a year where the Duke of Richmond opens up his front garden to the world and invites us all to celebrate everything speed.

And boy does he know how to throw a party.

The centrepiece of the festivities is the structure that adorns the Duke’s front lawn. This year Gerry Judah’s creation has been designed in honour of Aston Martin’s 70th year of racing at Goodwood as well as the 60th anniversary of its historic 1959 World Sportscar Championship.

And just a few yards behind it you have the legendary Goodwood hillclimb, a narrow strip of tarmac that for four special days in July becomes one of the most opulent racetracks in the world. For the rest of the year it acts as the Duke’s driveway.

With everything from modern-day supercars to vintage motorbikes, drift demos, Dakar racing trucks, Formula One legends, WRC machines and much, much more racing to the top, there will be plenty of speed to be hunted.

And that’s exactly why we love the Goodwood Festival of Speed. It’s the greatest celebration of that one thing that brings us all together here.

And it’s only just got going.

An Act Of Commitment 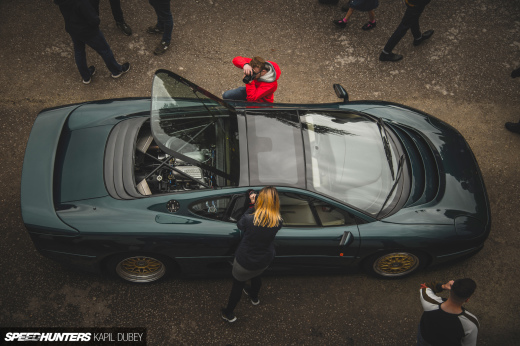 It’s my lucky number so I had to!

This doesn’t even scratch the surface!

That manual gearbox is a BIG OOF!

So happy to see that, and a real buck of the trend.

That ice cream though. Hahaha!

A bargain at £4. Welcome to Goodwood.

That DeTomaso inspired me to use a pound sign for the very first time... or a hash-tag, as the kids call it these days: #makecarsbeautifulagain

Please clarify - are you on board with the DeTomaso or you don’t like it?

I think he is on board. How can anyone dislike this beauty?!

Oh, I'm definitely on board. Sorry, I meant that in the sense that other designers need to follow De Tomaso's example. That thing looks so damn fine!

The Tomato Pantera was a highlight for me for sure.

Did you have something like a press pass or can a normal visitor get just as close to the cars/racetrack?