This weekend at WeatherTech Raceway Laguna Seca was every bit as incredible as I hoped it would be. Actually, it’s probably been even better than that.

I have thousands upon thousands of photos to sift through from the Rolex Monterey Motorsports Reunion, but there was one car that didn’t really belong. I figured I’d highlight it here and give you a preview of what’s to come.

Also, as you may have gathered from the cover photo, there was a bit of an incident in the Formula 1 group. We’ll start there.

First off, everyone was OK. As the dust cleared, I took a look at the two cars involved.

The damage didn’t look too terrible, although the ’77 Villiger-Kiel Shadow DN8 seemed to be worse for wear than the ’80 Tyrell Cosworth. For this to happen on the last lap of the race is a shame to say to least. I’m not positive exactly how it all went down, either, and I didn’t want to immediately bother the drivers about it.

Truth be known, I barely got the first sequence photo; when the incident happened I was on my way to the following corner for the next group coming out. Out of the corner of my eye I noticed a car pulling off the track out of turn three and the other open wheel cars awkwardly shuffling about. With a sliver of a window some 10-feet away, I opened fire into the braking zone for turn four. The one photo is barely useable as it is, and the others are even worse.

They do, however, give you a vague idea of what happened, and serve as a reminder that racing vintage F1 cars is not for the faint-hearted.

Next, to give you a small taste of the variety that was out here over the weekend, is a McLaren GTR. Built in 1995, chassis number 01R is just a tad bit too fresh to have made it into any of the racing classes. But this isn’t just any old McLaren GTR: This is the 1995 24 Hours of Le Mans winner.

It was after a very long Friday that I spotted this F1 GTR in McLaren’s garages at the Rolex Monterey Motorsport Reunion, and I figured there was no way it (or the other GTR) would be gracing the tarmac.

While not in any run groups, I was still wrong. During lunch on Saturday, McLaren had two-time F1 champion Mika Häkkinen take the thing out for a joy ride.

Getting up close and personal with the ’95 Le Mans winner was a cool experience. The caretakers of the car were very laid back, and, if I hadn’t been completely exhausted, I likely would have talked to them well into the evening. Instead, I just poked around with my camera, taking in the legendary machine.

As incredible of an engineering marvel the McLaren F1 was, it was a road car first. In fact, to go racing at Le Mans, McLaren detuned the unruly V12, but today it still absolutely flies. And the fact that this car won at Le Mans was totally unexpected, making it even more special when it happened.

There was loads more going on at Laguna, with essentially 15 different vintage race groups attacking the course throughout the weekend.

As you’d expect, the place was packed, too. Here’s a shot I took immediately after the incident with the two Formula 1 cars.

The rotaries were back as well, but this year there was a special theme at the Rolex Monterey Motorsports Reunion.

Nissan. This means that beyond the hundreds of race cars, dozens of which were Nissans and Datsuns, there were loads more excellent examples of the marque scattered around the track, paddock, and even the parking lots.

The Rolex Monterey Motorsports Reunion is a gathering of simply epic proportions, and I’ve got lots more to come from it. 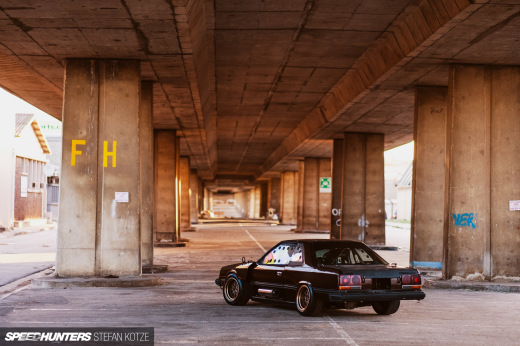 The Super Hok: A Different Kind Of Skyline GTX

I think the McLaren F1 is the greatest car ever made. Don't get me wrong, there are loads of awesome cars that did well in racing, but the F1 is the pinnacle in my mind (I have an R32 GT-R). Road [super]car first, race car second, absolute beast of engineering.

Thanks mate. Will have loads of Skyline & other Japanese stuff coming, both from Pebble Beach and the track

The car really is a marvel. I have often wondered if the feat could have been accomplished either before or since. When you think about how carbon fiber technology was barely far enough along to be used in a road car, regulations were changed for center seating, crash and other requirements (eg. headlight height) were in it's favor, and emissions were loose enough to allow the 650(ish)HP V12 to be a thing.
Yes, it came at staggering price, but convince me that someone could do 650HP naturally aspirated, manual gearbox, and 2200lbs again.
Same goes for the LeMans win. Everything came together to create a once in a lifetime shot for a lower class car to take the overall win. Has that happened before or since?

What's pretty cool about the McLaren F1 is that Gordon Murray essentially said he could have driven it to Le Mans on the road the year they won it (their first time out by the way).

I don't know of any other sports car that has done that in it's first year. As for the F1 crash it's pretty crappy but those guys have deep pockets. You don't drive those on track if you can't pay the bills.

That '77 Shadow DN8 is stunning, still one of the best looking F1 cars of the era. Pretty decent chassis too, Alan Jones took his first win in a car pretty much identical to that one.

Hey Trevor, the white F1 car is a Shadow DN8

Great stuff though, I stayed fairly well glued to the livestream all weekend wishing I was there. We do OK in NZ, but the scale and quality of Northern Hemisphere historic racing has me in despair at times. This is the stuff I love over anything else.

Aha, updated with that detail. Glad someone knows what they're talking about. By the way, I met some of the guys and organizers doing the F5000 revival down in NZ. DM me your email, would love to see that stuff from your lens.

That first picture is beyond epicness. It's that "blink of an eye" moment, the prefect timing, THE moment that we all, as photographers, dream about. It's the moment when things are about to go down but it's not yet too messy and too dusty to ruin it. The tight opening (in the safety fence I'd guess) bring a frame of shadow around the action, highlighting it even more.
Well done sir, picture of the year so far IMO.

Thank you man! Just sucks the focus wouldn't grab but that's what I get for using my old beat up 300 2.8! It's great, but a little slow sometimes.

Yeah, there was just a sliver in the safety fence with a window a ways away. As you say, I couldn't see after the crash from the dust, had to hide inside my shirt for a second.

I remember working on that exact tyrell/costworth while apprenticing at a race shop! Cant believe Im seeing it again. So sad to see it crash but glad it was being driven like it should than in a museum

Awesome! Yeah, it's great to see these cars getting beat on and this sort of thing comes with the territory. I'm sure they'll both be fixed up relatively easily.

Yes, actually. I got the owner's info so I can probably ask whatever you want. I'll be featuring it.... eventually

You're awesome. I was curious about the hood, front valence (because he still has the stock bumper), what the wheels are and if he stuck with the L28. My car is sky blue mettalic(color of the Z behind his).

Those wheels would look killer on my car.