Not A Show Car

The Porsche 912 has always been a simple car. When it was introduced after 356 production ended in 1965, its main goal was to be nimble, light, fuel efficient, and cheaper than the 911.

Five years ago, Mike and Mat Davidson set out to build a unique 912, all while keeping the essence of the car alive. They wanted to keep it simple and not go crazy with bodywork and other things, because it definitely wasn’t destined to become a garage queen show car.

The guys started with a bare shell that was rusted to pieces – basically a neglected piece of metal that used to be a car. Mike says, “It felt like [it was] both a total disaster and a clean fresh canvas to build from.”

So how did the two brothers build the 912 in their garage?

Rust is always a nightmare, so new metal was added to the floor pans, front suspension pan, rocker panels, striker panels, rear flares and a few other areas around the car.

The paint color is known as Wimbledon White, and although it’s not a Porsche hue, both Mike and Mat felt it had the right vintage look to it. If you think you’ve seen this paint color on an early model Mustang, you’d be right.

However, this car’s biggest surprise is its 2.0-liter engine which once lived in a Version 8 Subaru WRX STI Spec C.

It’s a tight fit, but the custom-made intercooler just clears the decklid and sits half an inch away from the alternator.

To ensure they did as much work on the car as they could, the brothers learnt to weld aluminum, which is a feat in itself.

The conversion all ran pretty smoothly, but one area they had a little trouble with was the cooling. The car runs three custom radiators – one in the front RS bumper opening, and one in each front fender, and there was an issue with them damaging the front tub, but that was eventually rectified.

After running on the dyno, the engine turned out 294hp at 19psi with 265lb-ft of torque. Factoring in the weight of the car, 2100lbs – about the same as the NA Miata – I’m sure you can imagine how quick and fun to drive this little 912 is.

And the wheels are 15×7-inch ATS Cookie Cutters, as opposed to the usual Fuchs that many Porsches run. 225/45R15 Hoosiers are the tire of choice.

Equal-length headers were handmade for the car, so it lacks some of the rumble we’re accustomed to hearing out of our favorite flat-fours. I’ll let it slide though, because it still sounds fantastic.

Like the outside of the car, the interior refit is modest but very clean.

The first thing you notice is the Momo Prototipo steering wheel, which is a common find in old 911s.

The seats are custom RS-style items with a beautiful houndstooth plaid finish by TRE Motorsports.

And the tachometer is custom made by West Hollywood Speedo.

These days, it’s rare to find gems like this built from the ground up in a private garage, but this STI-powered Porsche is proof they do exist.

Some might argue that the engine swap is blasphemy, but the way I see it, Mike and Mat traded a broken flat-four for a working flat-four – albeit one with water-cooling this time around.

But what do you think – does this car still carries the essence of the 912 in spirit? 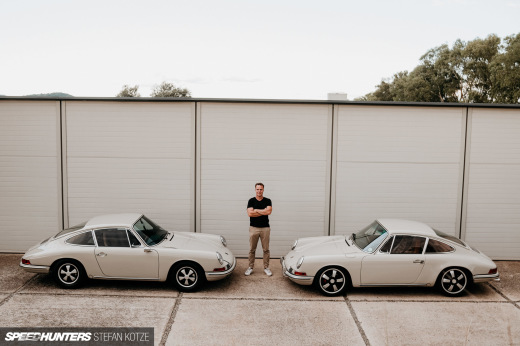 Looks nice, the swap is... Original, but if its sound fits with the looks it's ok !

..even if that beautiful shape deserves the classic Porsche six noise, I'm a sucker for unholy unions.... Been toying with the idea of putting a Subary N/A six in my 914.....simply because aircooled sixes are just rediculously pricey.

The purist in me hates this swap but this thing is probably super fun to drive, and probably even more fun than a modified 911 from the same period. Pretty cool.

Came to Hate, left in love.

914RS Grab a Suby boxer 6. Probably dirt cheap if you can find it.

Cars are really like art. Each person takes what they like and don't like from them; it's all subjective. Original was a flat-6; but I'll let it slide;P only the literage differed. Im a big motor head; like almost everything on 4 & 2 wheels and I'm a HUGE Porsche afficionado and purist. That being said when it comes down to it, if a car is given new life and the original parts are unusable I feel it's not an issue because the driving pleasure is continued/shared and a lot of the brand and "feeling"/"driving spirit" of these icons live on. If it's going to happen..a flat-4 is better than a V8 imo. Rock on!
Keep the unique builds coming!

Aficionadoo 912s rocked a flat-4. There is nothing to let slide.

Proof that you can teach an old dog new tricks! Always learning! Lol I'll take that one; makes sense really given the age and the engines available. Never put 2n2 together.

This is very cool, the build looks really well thought through and cleanly executed. I like that the cookie cutters are getting some love on this application, a muchly under appreciated wheel for sure.

I was talking with my friends the other day about Subaru-swapped Porsches, and I was there thinking "why hasn't anyone done Porsche-swapped Subaru?"
Seriously, it'll be nice to see that.

like Amber implied I am surprised that you can make $7698 in four weeks on the internet . go
❥ ❥ ❥ ❥ ➥ ➥  ➥ http://tinyurl.com/ztkz6fy

If I could meet the builder, I'd ask them how they hooked up the Spec C motor to the 915 gearbox! What kind of custom bellhousing would that be??

Then again, SCTA guys have got those kind of crazy swaps down pat...http://www.wilcap.com/

my Aunty Abigail got a fantastic metallic Mercedes GLA-Class SUV from only workin part-time on a pc at home... why not look here

This is why I love globalisation.

I think this is a great swap for a 912. Like the fit and finish of everything underneath the duck tail. Wish we could hear though

I must say I'm utterly biased toward Japanese/European engine swap into Japanese/European car , I will like almost any kind of swap between those continental ... but anyway , this is actually quite brilliant , starts from clean (rusty) canvas & you build the car into such amazing states !

oldworldgoods We used bits from Kennedy Engineering, they are the masters of mating mismatched engines and transmissions.

Thanks for everyone's support!

And for updated photos on IG - follow the car @Porsche912RSTi

So its basically a very very expensive turbo miata? I don't see the point but it's cool af

Great execution on the build, well done! I'm ambivalent about the motor swap. It seems to defy the logic of the 912 as a car. Which was to be a high-revving naturally aspirated 4-cylinder car, basically a 911 chassis with a 356 engine. The turbo Subaru motor, while interesting, certainly brings too much power to the stable for what this car was designed to be by Porsche. Alas, what I really see here is excellent execution deprived of critical consideration of what a 912 is. The 912 is/was a unique car in Porsche's lineup and this one looks and seems to act simply like a hot-rodded '73/74 911 RS clone.

Then again - to each their own -  if the goal was to have a silly-fast 912 with great build quality this was certainly accomplished.

With Porsche and Subaru being at the fore of the boxer layouts, I'm a little surprised that I don't read about more swaps out there. I mean, I get that if you buy a Porsche, you are wanting the complete package with it, heart and all. So that a swap isn't going to cross your mind unless you are incredibly adamant about it or are out of other options. But I really do like seeing builds off the beaten path like this. Makes me curious if there are Porsche mills in Subaru boxer machines.

my Aunty Julia just got Mercedes R-Class Diesel by working parttime off of a computer. find out here now

My Uncle Luke got white Mercedes E-Class E63 AMG only from working part time off a laptop. browse around this website
http://www.bidcash3.com

just as Lori implied I am alarmed that anybody can earn $6719 in 4 weeks on the internet . see it here=====net.pro70­­.ℭomllllllll

Swapping a Flat-4 for a Flat-4 is certainly fair game in my book, given how uncommon the layout is.  This is basically the best flat-4 around, so makes sense as a kind of 'ultimate' 912, keeping it four-pot.

I'm interested in how the intercooler copes; Scoobies are known for heat-soaking their top-mount interwarmers as stock, and that's at the front of the car, with a scoop feeding in air.  This is at the back, no scoop, and running higher power, so it'd be interesting to hear how inlet temps are in sustained hard driving.

You know, normally I'd scream "blasphemy!!" at a swap like this, but knowing what they started with and knowing what it costs to build even a crummy 912 motor vs a decent power-producing Subaru EJ-series, this doesn't put me off in the slightest. In fact, I love it! Right on!!

This is, without a doubt, the finest build I've seen anywhere in 2016. The builders nailed it, and you nailed the coverage and the shots. I over-the-moon appreciate something radically different and extremely custom and bar-none original; however, there is nothing 912 about it: 73 911 RS bumper, 74 911 suspension, 300 hp (and turbo), hoosier tires? Like I said, they nailed this build, but it's barely in 912 territory. The only thing 912 left about it is it still has four cylinders! (For clarity, I'm not mad/upset or anything, just calling it as I see it!)


Seriously, get that thing to SEMA next year. That's a rare treat.

Nathan Wright the only way its similar is in weight, driving characteristics are totally different. Dont forget the fact that its rear engine...

mddavids i remember randomly googling something and coming across this thread and i remember reading up to about the cooling problems...i'm so glad to see this here and its every bit as awesome as i thought it would be back then