Now that Paddy has wrapped up his coverage from Gatebil Rudskogen 2016, I want to rewind back to the precursor event held a couple of weeks prior at Mantorp Park in Sweden.

Although Gatebil Mantorp isn’t as big or quite as crazy as the world-famous Norwegian event, it is as every bit an eye-opener, hence why I always make it a priority to attend.

Previously, I’ve driven up to Sweden from Germany in my trusty old BMW E46 Touring and most recently a Mk7 Golf GTI, but this year I really wanted to step up the roadtrip game.

Markus from Brömmler Motorsport was one of the first people I called upon, and he most definitely came through, hooking me up with a Nismo GT-R via one of his customers.

If the name Brömmler Motorsport rings a bell, it’s for good reason. The guys caused waves in Germany at the 2013 Tuner Grand Prix, turning up at the Hockenheimring out of the blue with their street legal then-proto-R35 Clubsport.

Driver Peter Pyzera took the Nissan from right at the back of the grid to the top of the podium on its very first outing. Check it out in the on-board video above.

The Nismo GT-R I’d be driving has a similar upgrade under the bonnet. It still retains the stock turbos, but Brömmler Motorsports has performed an ECU remap and fitted a custom stainless steel exhaust system with switchable valves.

The original 20-inch R35 Nismo wheels have been retained, and given they’re forged and made by RAYS, why would you want to change them? 20mm spacers front and rear are used to push them a little further though.

For that little bit of added sugar in the cockpit, the GT-R’s interior accents have all been replaced with real carbon fibre inserts.

The real party piece of this car however, is the paint job. Nissan was unable to deliver the R35 with a matte finish as the owner desired, so after taking delivery he had it resprayed in the factory matte grey colour. Then to finish things off, he let the amazing airbrush artist Sandra Milovanovic from MachArt Customs loose.

The attention to detail is simply mind-boggling, and on the hood piece which depicts the engine beneath, Sandra even went as far as to paint in the lettering that features on the piping.

When I picked up the GT-R, I made it a point to visit Sandra at her studio. There, even the stuff lying around was a sight to behold. In an age of digitally-printed vinyl wraps, it’s so refreshing to find a proper artist literally getting their fingers dirty working with paint and gold foil.

When it comes to this particular car, Sandra’s highlight work is on the sides. It’s a menacing artwork of our beloved JDM monster, Godzilla.

I think it’s cool that the artwork on either side of the car isn’t identical either.

Here is some classic consumer advice: the GT-R managed to swallow my big Pelicase full of camera gear, the case with my 400mm lens, my regular luggage and a whole bunch of Speedhunters merchandise – and all without even breaking a sweat.

I wasted no time, once I was all packed up, had my phone connected and the music playlist loaded, it was time to hit the road.

I was on my own for this trip, so in order to grab some snaps en route, I had my camera mated to a 35mm lens at standby on the passenger seat.

Of course, there was no way I could look through the viewfinder while I was driving, so I had to go with the traditional method of ‘aim, spray and pray’ for all these driving photos.

My first planned stop was in Hamburg. I’d be staying overnight here before trekking through Denmark and then into Sweden.

Even though I had mostly blue skies when I set off, I knew there was some heavy rain coming my way and that the tires on the car were close to the end of their lives. Add to this the fact that I really wanted to do a legal vmax run in the GT-R, it soon became apparent that I only had a very small window of time to achieve it. And then I passed my favorite autobahn sign ever…

Everything happened a bit too quickly at this point. With the suspension settings in ‘Normal’ and gearbox in ‘R’, I just buried my right foot into the carpet. In an alarmingly short time I was riding the sixth gear limiter at an indicated 328km/h (203.8mph).

Keeping in mind that this car was laden down with nearly 150kg of luggage, the acceleration was impressive. Running optimum fuel and with only the driver on board, I’m told it can go 100-200km/h (62-124mph) in 5.2 seconds. The only thing it really needs is a longer final ratio or a seventh gear.

A couple of attempts later, I noticed I was running on fumes, so I eased up and pulled into the next gas station. This car was specifically mapped for optimum output with 102 octane fuel, which in Germany is only available at Aral gas stations. Shell is next best option offering its blend of V Power Racing 100 octane fuel, so it was good thing I’d done what I wanted to do already.

As I waited for the car to fill up, it struck me that I hadn’t really covered much physical distance since my last fuel stop. A quick calculation on my phone revealed I’d used 55 litres of fuel in just over 81km. That’s just under 3.5mpg! I immediately wondered if there was a hole in the tank, but alas no.

The rain started coming down as soon as I got back on the road, so I settled into cruise mode. The suspension was switched to the ‘Comfort’ setting, and I cranked up the brilliant Bose audio system that comes standard in the GT-R.

The R35 on almost-worn Dunlop Sport Maxx tyres really didn’t like the rain, so my progress slowed down considerably. On the upside, I managed to squeeze out a bit over 500km from the tank of Shell fuel.

Usually on trips like these I get approached by adults who are interested in knowing a bit about the car, but for a change this time it was children who were dragging their parents over to check out the Godzilla artwork.

With the sun coming down, I slowly rolled into Hamburg. They say time flies when you’re having fun, so it’s little wonder I barely realized the day had already come to an end.

The weather wasn’t much better in the morning as I left Hamburg headed towards Denmark, and the car was aquaplaning all over the place so I was super relaxed.

Eventually the sun did peek through as I arrived at Puttgarden to catch a ride across the 12-mile (19km) Vogelfluglinie.

As I drove onto the ferry, I became conscious for the first time about just how wide the GT-R was.

After all that bahnstorming in Germany, empty motorways and speed limits can get disorientating very quickly.

For some reason, the Øresund Bridge and following tunnel were pretty much completely devoid of traffic when I was on it, so you can imagine I had less of a guilty conscience of being a public nuisance when I opened the exhaust valves and worked my way up and down the gears a few times. Picking up revs the engine just screamed its heart out. No amount of caffeine can deliver a better wake-up effect, I’m convinced.

The motorway by the water provided a stunning backdrop to the midsummer night drive on the final leg towards my destination.

And by midnight, struggling to stay awake, I finally made it to Mantorp Park.

What did I find there? Stay tuned for the main event coverage… 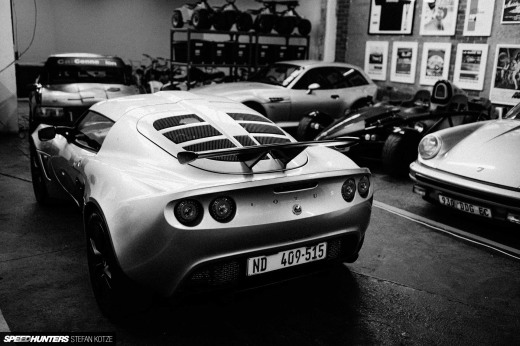 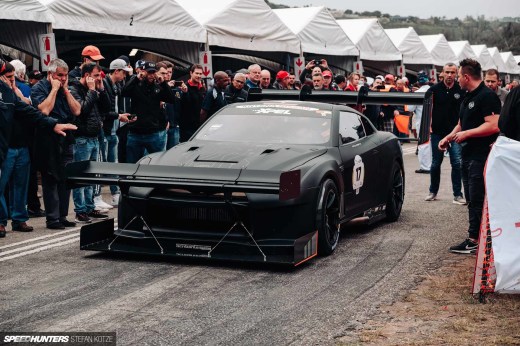 The GT-Rs of South African Hillclimbs

Good thing it has an awesome paintjob.

55 litres in 81kms? I believe that was the sound of my butt hole tightening.

That's abominable fuel economy holy bejesus! The hole's gonna be in your wallet not the gas tank...

Aficionadoo The 14L/100km was an estimate of the economy driving fuel efficiency (~500km to a tank, 74L in a GTR fuel tank)

I only did it once. For science!

That paintwork is actually amazing. I really like that!

I absolutely love these journey stories. Can't wait for the next instalment!

On another note, what ever happened to the SH Gatebil Honda/Golf camera car thingy?

hi mind sharing how did u shoot the opening photo?

i mean the mean when you were at top speed.

Amazing pics and damn that artwork is beautiful. That woman has an amazing amount of talent in an art form that is unfortunately dying..

Not a fan of airbrush stuff like this but Jesus they have some skills... can't knock that

I've always said that the E4 road next to Vättern is a beautiful place to sit in a car and look out the water. That picture is now my wallpaper!

"The Road to Gatebil" sounds like a hilarious old comedy done by Bob Hope and Bing Crosby except with vehicles. So I guess it would be a cross of that and Cannonball Run.

I did just that! It was amazing! Butter for the soul.

what Kyle replied I am surprised that a person able to earn $5606 in one month on the internet . over at this website

Unbelievably shots Alok, amazing what you can accomplish with a GoPro while you are driving. The roofmount capture through the tunnel definitely pulled me through the screaming cavern with you.
And what a car, that level of airbrush work is divine.

Alok, these photos are nothing short of stunning! Absolutely gorgeous!

my Aunty Stella got Toyota Prius only from working part time off a home pc... go to this website.....day-change.comᴵᴵᴵᴵᴵᴵᴵᴵ

like Debra replied I am surprised that any body can make $9228 in one month on the internet . go now

55-litres on refuel ? Means there's still like 19-litres of fuel left in tank ?
How many litres you fill up with 500-km range when it was raining ?

just as Karen replied I am dazzled that a mother can profit $7987 in one month on the computer . read review see it here---->> foxreport77.comlllllll

as Nancy answered I am impressed that a single mom able to make $8648 in 1 month on the computer .see it here=====social36.ℭomllllllll

A wonderful paint job for a beastly car, I'm still surprised police didn't come for you hitting that sort of speed down the highway. the pictures you captured are insane and despite being upset that your Godzilla isn't rolling with a V8 (I'm Australian so don't be surprised if I'm unhappy about a car not running a V8 engine), I'm glad someone has finally made this beast with a killer engine and vinyl wrap! Godzilla himself would be proud of this!