In the history of motorsports, there are certain race car liveries and color combinations that are perhaps more famous than the actual cars that wore them. I’m talking about the legendary colors of names like Martini, Gulf, and John Player Special, all of which bring to mind some of the greatest racing cars ever to lay tire on a race track.

Another one to put on the list is BMW Motorsport’s signature combination of light blue, dark blue and red. For decades, the M stripes have graced race cars of all types, and seeing them together instantly reminds you of BMW’s vast motorsports successes. It’s really quite amazing the power that three simple colors can have.

It was actually those colors that were the first thing I noticed when I encountered Bulletproof Automotive’s 2016 BMW M4 build at last year’s SEMA Show. And that’s how it was supposed to be.

The decision to integrate the classic BMW racing colors came as a way to appeal to the old school BMW purists who might otherwise scoff at a German performance car that’s loaded up with aftermarket parts not from Germany, but Japan.

The current phase of the Bulletproof M4 build was completed in just five weeks, with the car finished just in time for its debut in Las Vegas at SEMA. And there were plenty of logistical challenges to be worked out along the way.

For starters, the owner of the car actually took delivery of the new BMW in Hawaii and rushed to get the engine run in before shipping it halfway across the Pacific to Bulletproof’s HQ in California.

The owner is a long-time Bulletproof customer whose previous cars have included modified Euros as well as Japanese models like the Evo and GT-R. For for the M4 project he wanted to build a German car with heavy doses of high-end Japanese tuning style – something that Bulletproof is known to be quite adept at.

Once the Bulletproof team had the brand new BMW in their hands, the transformation begun. It started under the hood where the N55 twin-turbo inline-six was treated to an ESS race tune, Gruppe M carbon fiber intake and an Armytrix full exhaust system.

This all results in a solid 500 horsepower to the rear wheels with plenty more to come, including planned turbo and intercooler upgrades as the S55 aftermarket continues to develop and mature.

The F82 M4 is a damn impressive machine right out of the box, but that didn’t stop the Bulletproof team from fitting additional upgrades to the suspension and chassis. The coilovers for example are high-end Aragosta pieces from Japan with external reservoirs and a lifter system up front.

The already substantial M4 brakes were replaced with a Runduce Japan big brake kit featuring 8-pot calipers up front and 6-pot calipers in the rear. The rotors themselves measure an enormous 380 millimeters in diameter.

Not surprisingly, the engineering artists at RAYS were called upon to provide wheels for the project – more specially a set of G25s from the Volk Racing catalog.

The wheels measure 20×10 inches up front and 20×12 inches in the rear with Toyo Proxes R888 rubber all around. As you can see, the big Volks do a great job of filling up bodywork that’s just a bit more aggressive than your typical M4.

The centerpiece of the exterior is a complete Varis VRS wide-body conversion that’s been fully molded for a seamless look. In profile it takes the already wide and aggressive M4 body to an entirely new level.

The body-kit is complimented by other parts from the VRS catalog, including a carbon fiber hood designed to deliver extra cooling, a carbon fiber rear diffuser system, and a gigantic 1800mm carbon fiber GT wing that towers over the rear end.

And again there’s that classic BMW M livery, which really ties everything up and perfectly blends the modern styling with a nice little nod to the car maker’s motorsport roots.

Inside you’ll find the cabin has been customized in a way that should be very familiar to anyone who has seen Bulletproof’s recent builds. There’s custom Alcantara upholstery and stitching throughout, and the stock seats have been swapped out for a pair of Recaro Japan RS-G buckets with Willans x Bulletproof harnesses.

In the back, the rear seat has been removed and in its place sits an HG Motorsports roll bar that will come in handy when it’s time to hit the race track.

And for as well rounded as the car seems, I’m told that this is just the first phase of what’s going to be an extensive build. Already in the plans are continued power upgrades with matching improvements to the cooling system and a new set of lighter 19-inch wheels and tires specifically for track use.

Bulletproof’s take on the BMW M4 might not be considered the traditional approach for modification, but with a keen attention to detail, great overall balance and a splash of classic racing colors, it’s hard not to imagine more and more BMW owners embracing this approach in the future. 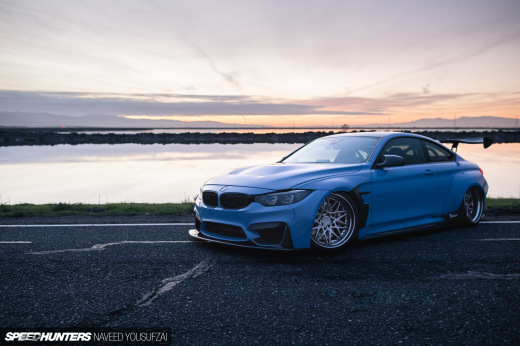 Blurring The Lines: An M4 With A Touch Of JDM

I don't know which one is better now.

I think it's one hell of a car but I struggle with the idea of going to all that trouble with lightweight carbon parts and a roll cage, only to have heavy suede materials and a full dash.  I imagine there is still air-conditioning.
So the car in a way suffer from an identity crisis?

Perfect, would of added a carbon fibre dash for the sake of lightening it but it is still perfect.

SonnyNguyen This not a EG hatch,  500hp no need worry 10kg

Nice car, surprised I like it. Just hope it's not wasted and actually used on the track

@SonnyNguyen I see where you're coming from here, brother, something about this reeks (at least to me) of show car. Yeah it has expensive race bits thrown at it but I don't think the track is where it sees a bulk of use.

The first time you refer to the engine you call it an N55, just a heads up.

SonnyNguyen Does it really matter? It's not like it's a race car where it should serve a very specific "purpose".At the end of the day, the owner will still be the happiest man in the world, because this is their dream car, the way they want it to be.

Nice car. Really like the M colors on the Recaro seat.
On a side note is it possible to have lbs and inches instead of kg and mm. That really throws me off.

What ever happened to spending time on building the car you want? All this 5 week build time crap is detrimental to the car scene in my opinion. All you're getting is cars built for attention, and will be discarded as soon as no one is interested any more. Throwing money at someone to build you something quickly is not being a car enthusiast in my mind.

I dont know, there is something not 100% here.
OEM brakes are 380x30 mm, and With racepads the only uppgrade would be the Carbon ceramic package.
Canhards = never streetlegal ( deff not allowed on the Nurburgring )
The rear wing is to huge, does not match the line of the WB kit.
I just dont feel it.

Another outstanding build from Ben and his team at Bulletproof.  I need something like this.

whats the point of keeping the rear seat when you have a roller cage crossing them? remove them for the weight reduction!

a bit too over styled for my liking.

3nigm4 This was built by Bulletproof Automotive to showcase their parts catalog and inspire customers to purchase their parts for their own car! If this was owned by a single person with too much money to spare, I'd agree with you.

@snow18 No rear seat, just an upholstered plate to block off the trunk, I believe...

@snow18 KeatonBelliston is correct.  It's not a rear seat, it's just a an upholstered rear seat delete.  The concept was to build a street car that had all of the fixings of a track prepped race car  This included keeping the interior in-tact and adding a little something special for SEMA.  The entire rear panel was upholstered in a diamond stitch pattern... after all, it's still a BMW so you have to stay classy ;).  My favorite part of the build is the retro DTM style M livery.