Okay, I’ll admit that this may not be the cleanest car we’ve ever spotlighted, but it certainly has its charm. For those of you unfamiliar with the Talbot Sunbeam, it’s a small three door and rear wheel drive hatch which briefly lived in Europe during the late seventies and early eighties. The Sunbeam Lotus edition, which is what this car was originally, was the hot hatch version and featured a 2.2 Lotus 16valve slant 4 engine in the standard production car. The Talbot Sunbeam Lotus won Talbot the World Rally Constructors title in 1981, so it was no slouch and had a proven racing pedigree.

The Sunbeam wound up production in 1981/82, so there was never a Group B version. If the car had survived long enough, I’d like to think that this is what their Group B version would look like.

Retaining the original Lotus 2.2 Slant 4, but shortening the stroke to reduce capacity to two litres and in-turn increasing the rev limit to 10,000RPM along with a dry sump system. It makes the sort of noises that make children cry. This is of course a good thing. When completely standard, these engines made around 150BHP, so one can only guess what power it’s laying down these days.

Those sweet smelling exhaust gases exit through the driver’s side skirt.

The power is sent to the rear wheels care of a Tractive sequential gearbox with paddle shift.

Painted in the Works Talbot colours, I couldn’t help but smile every single time I saw this car. Incroyable.

Behind Closed Doors: Inside Tolman Engineering

A Historic Blast in Killarney 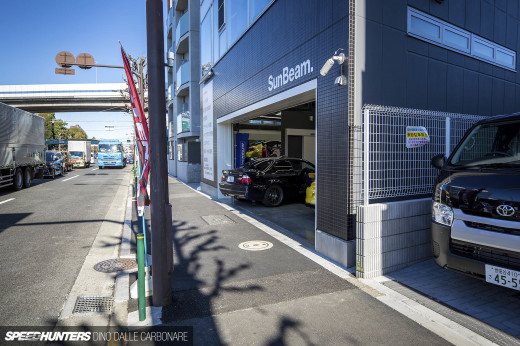 Why are air filters so shunned for photo shoots? I like ITB's too, but I honestly cannot remember the last time I saw an air filter on SH.

check the other posts, some of these cars are running open trumpets

check the other posts, some of these cars are running open trumpets

Man what a car! Those wheels are something else too, anybody know what they are? I wonder if the VW scene has gotten a hold of them yet haha

Is that is broken wheel in the background of the second picture?  If it is, damnnn.

@roryfjohnston It's just the 'fan' of the wheel removed.

SpeedHunters has been awesome lately with all this HillClimb & Motorsports coverage! Keep it that way! Screw that Hellafag shit!

@PaddyMcGrathSH ahh, I see.  It makes more sense once I saw the lack of wheel nuts.   Interesting design.  thanks for clarifying.

Is that fuel rail brass?

Thank you for these amazing videos at the end of the hill clim car spotlights! Its great to hear what those screaming 4 cylinders sound like!

"...I couldn't help but smile every single time I seen this car."

That is a horrifying trend in the English language.

I love hillclimbing! Concentrate more on this stuff than the jdm gay/useless camber/vip scene.  The recent stuff from England and the coverage of the bergrennen has been awesome!

Hillclimbing is fantastic and I love the crazy wide stance on this little monster. Cant remember ever hearing about a standard lotus 2.2l developing 240hp though, more like 160hp. When worked like this you can look at 240hp but not standard.

Of course it does, however my fat fingers hit '2' instead of '1'. Thanks for pointing it out!

Thanks Paddy, great article. There is a similar one of these for sale in Australia at the moment if any one is up for the challange. Its a 4 door with the little motor and I think an updated body but it is a rare RWD hatch and with the right conversion could be great fun. I have no afiliation with the car at all just came across it the day before reading your article and thought, snap!

Nice to see an old talbot getting some lime light sounds like no other,really enjoyed the article paddy.