Wow, I didn't see this one coming! Apparently, the folks at Scion are very happy with the way things have been going thus far in their inaugural season of Formula Drift. Kenshiro Gushi and his RS*R Scion TC finished in 14th place in the 2008 Formula D rankings, appearing in the Top 16 tandem drift competition at four different Formula D Championship round events. Kenshiro sure has come a long way from the beige metallic colored SR20 powered PS13 240SX he started with when I first met him at his dad's shop, Gushi Auto!

Now, Scion has decided to support yet another team in the Formula Drift series – Team Papadakis Racing. While not everyone may be familiar with the formal business name of the new Rockstar Energy Drink/Scion drift team, I'm sure you know the team principal, import drag racing veteran Steph Papadakis, and everyone definitely knows the team driver – Tanner Foust (he's the guy who won 1st Place in the Formula D Championship Series for the past two years in a row).

Apparently, Papadakis and his team will use a factory FF Scion TC and convert it to a driftable FR competition car just like the RS*R team did; they will use parts from the all wheel drive Toyota Caldina and Toyota Avensis cars to make the conversion.

I wonder when American Honda is going to step in, and support some of the guys who might want to drift Hondas – not just S2Ks and drifting Elements, I'm talking about Integra and RSX FR conversions… after all, it has been done before. Anyone remember Blake Fuller's white DC2 Integra, converted to FR? 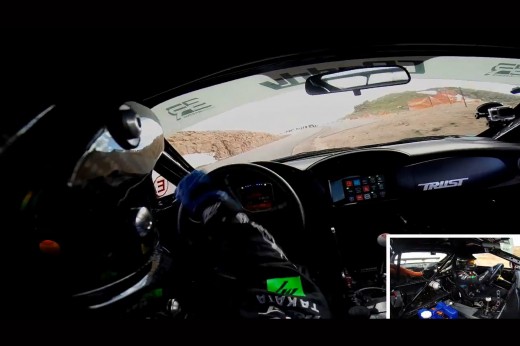 didn't that original Tc drift car get through tech on a small loophole? I forget.

Brian, i do hope you're joking... lol

Formula D just gets more and more uninteresting. I guess Scion wanted a driver who could make the podium because it Gushi isn't up for it.

I think we should make a "flag as sarcastic" feature for comments like the one above.

Did you hear the other news?

RMR Rhys Millen to pilot a Chevy tahoe for 2009. Apparently it will have Racing hart wheels and a full functional bodykit.

Sam Hubinette and the MOPARS will pilot a Caravan converted to RWD with a load of MOPAR parts from the Magnum and Challenger.

I'm hoping to get the call from Ford so I can build a costom Aerostar.

i'm hoping that they can figure out a way to stop breaking the axles on the tC.

Why did the comments get all out of order?

Maybe they should keep it Front Wheel Drive and have hatekayama drive it.... or whatever his name was. I forgot.

Um. Okay. Scion is pouring a whole bunch of money into promoting a version of the Scion TC that doesn't exist for the end customer. Remind me again why this car isn't illegal under Formula D rules?

Man, I'm all up for never-before-seen stuff, and I'm okay with 4WD cars being used in drift even though I find them a ~little~ unorthodox, but that's waaaaaaaaaaaaaay too unorthodox for me...

That would be a good example of an unorthodox drift car, but it's legality is easily explained:

Scion is a subsidiary of Toyota, and the Scion TC model share its chassis with a few Toyota's including the 4WD Toyota Caldina (which is also the current holder of the legendary Toyota GT-Four title...).

Since the chassis they use on the TC is the same as the Caldina's, it makes the car's convertion competition-legal. (I still think it's friggin' unorthodox, but hell with it.)

You make my day a bit brighter.

Brian: yeah, you're talking about Hatakeyama. but he was weak, and Falken crushed his famous EF. The EF looked the best when it was camouflage, so fresh... even with the black paint/RS Watanabe logos it looked dope, until it got painted all corporate style. So sad that the awesome 14x8.5 RS Watanabe Rs got crushed with the car... I wanted soo bad to just swap them out with Rewinds real quick, nobody from the state would know the difference...

Formula D should put a rule on factory supported teams, if your converting the car to RWD, you better offer it to the public.

This is the gheyest thing in the world.

Man I gotta tell you, I friggin' hate scion Tc. Scion is always pushing their cars so hard to the 'youth' market with all this ricey garbage. They are the new ricers. I remember hondas used to be the ricer kings. Now hondas are just awesome and these Tc's took that title. Whats up with these Tc's in Formula D? The RS*R one was interesting but I still thought it sucked at life. Lots of great work done on it but its still a Scion Tc. Now these rockstar car? Arghh, someone stop this madness please! How can these guys be allowed to run these cars with all these parts from other cars when Takatori got all this heat for doing the same thing in his GTR?

Papadakis? No disrespect but this guy doesn't seem very good at drifting. That poor AEM S2000 got trashed so many times when he drove for them. Not that I could do any better but how does this guy get to drive for any pro drift team knowing that he's wreck prone? Well all for the best, do us all a favor and crash those damn Tc's.

Arggghhh! Bring D1 back to the states! Enough of this Fomula Doh! Seriously american drifting is so bad. I mean we get a damn ARISTO driven by GT driver Orido and most people dont get how big that is. Meanwhile a Scion Tc gets more news? FAIL

Maybe we just need to introduce a FF drifting series to keep all these manufactures of mild performance vehicles satisfied.

I'd rather see hyundai's new rwd model in the mix and how it holds up. Anyone with me?

Section09: well, we wanted to do a car feature on orido's GS, but he wasnt too cooperative with us when we were trying to shoot it. you should complain to him. but he'll make you wait in a line before you can tell him yourself.

yeah!! hyundai! actually i heard a pretty well known team will be debuting a hyundai for next year. i wonder if they will be sponsored by hankook or kumho? hehehe

Oh man I wasn't complaining about you guys! I know Orido is a hardass like always but my rant was more about just these Scions. They just rub me the wrong way.

You guys just keep doin' what you do, you're great at it.

I heard a rumor from reliable sources that the Houst tC will be powered by a 800hp 5.7L v8 (AKA NASCAR Motor)