As we prepare to wrap up our Porsche themed month here on Speedhunters, I thought I'd post some photos of FIA GT cars running uphill at one of the most famous corners in the world of GT racing and Formula One – Eau Rouge. This famously treacherous corner is part of the Circuit de Spa Francorchamps in Belgium.

Eau Rouge gets its name from a Belgian stream/river by the same name; the famous uphill corner is located at the point where the Spa circuit crosses over the stream.

Above is a photo I took of the cars at the Spa 24H race; in this photo, the cars have just finished racing down a straight, and the teal/black Maserati MC12 and the white Porsche are negotiating the left-hander turn at the bottom (Eau Rouge), as the other two cars begin racing up the steep uphill ascent that is the Raidillon corner.

Check out this Porsche as it launches itself almost vertically up the Eau Rouge/Raidillon combination of corners! The almost vertical elevation change is just insane!

Here's a photo showing the straight at Spa-Francorchamps that leads into the Eau Rouge/Raidillon corners. See the left hander at the end of the straight with the rumblestrips on the left side? That's the start of Eau Rouge, and that's where the river runs underneath the circuit. Just look at how steep the climb is – the drivers need to negotiate a steep ascending right hander into a blind crest! Extremely difficult and extremely dangerous!

I think Eau Rouge looks so gorgeous in this photo, because of the sun's position as it lit up the track. The house at the top is actually a bar and a "VIP Area" that hosts parties and things like that. During the Spa 24H race, I didn't get to go up there, because I'm a nobody in the world of European circuits… but our good friend Patrick G (aka "The King of Francorchamps") was definitely partying up there!

Patrick was introduced to us from Mike Dentandt, a Porsche test driver that we met at Leipzig. Patrick took us around the circuit's backroads in his car, and showed us a lot of really cool areas to shoot from, and spectate from. Patrick is also the guy responsible for our Spa AE86 photo story, because he was the one who told me about the car, and took us to the location where the car is stored! Anyway, I call Patrick "The King of Francorchamps" because he got us access to everywhere we needed to go, because of his smooth talking abilities and also because everyone he meets seems to like him right away! Seriously, Patrick is the man! This being said, while I was trudging up the steep hill at Spa with a bunch of camera stuff around my neck, Patrick was chillin out, beer in hand, at the Spa 24H VIP section – the house at the top of the hill. If we were in Southern California, it would have been all good. I'd have been up there hanging out with Patrick, shooting photos of the VIP house up there, but since we were in Belgium and I don't speak French or anything other than a little bit of Japanese and a lot of Hip Hop Slang, I'll just treat you to this photo of the house from far away, LOL.

BTW, John Brooks told me that the paved runoff to the left of the Eau Rouge corner was added to make it a little bit safer, because several drivers lost their lives to Eau Rouge – one of the most famous incidents being ex-F1 driver Stefan Bellof's crash in 1985 as he was racing his privately owned Porsche 956 up Eau Rouge. Apparently, Eau Rouge also claimed the life of an AE86 driver named Guy Renard, who was driving a Corolla GT (Levin) in 1990.

Again, here's another photo showing Porsches accelerating up the hill on race day. On Wikipedia, I read former F1 World Champion Fernando Alonso's description of the feeling of Eau Rouge:

"You come into the corner downhill, have a sudden change [of direction]
at the bottom and then go very steep uphill. From the cockpit, you
cannot see the exit and as you come over the crest, you don't know
where you will land. It is a crucial corner for the timed lap, and also
in the race, because you have a long uphill straight afterwards where
you can lose a lot of time if you make a mistake. But it is also an
important corner for the driver's feeling. It makes a special
impression every lap, because you also have a compression in your body
as you go through the bottom of the corner. It is very strange – but
good fun as well."

Here's another photo of a Porsche leading a pack of FIA GT cars up the famous Eau Rouge corner – only this time, it was in the fog and rain. The frequent weather changes in this area of Belgium definitely make the Spa 24H race extremely challenging for drivers and crew. I have nothing but respect for teams that successfully complete 24H races here, regardless if they finish on the podium or not. It's a great achievement to finish the race at all.

Thank you so much to Patrick G (The King of Francorchamps), Mike D, John Brooks, Dave Lister, Jeroen, Rod, and the cute girls at the FIA GT media registration desk for making my trip to Spa Francorchamps and Eau Rouge such a memorable one!

A Belgium Blast With Friends 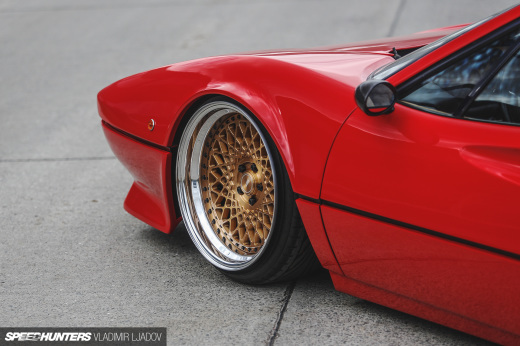 Spa is by far my favorite racing circuit in GTR2 (except for the Nordschleife of course...) and I just love going through Eau Rouge over and over gain.

thanks ilya! Spa is amazing in person... but damn, Nordschleife.... is just incredible.

I would love to drive here someday. It get me thrills just by reading it!

this is like the reverse of Laguna Seca's Turn 7, the Corkscrew, a steep 27 storey downhill sharp turn with more fun to come!

Ok get ready for one of the best Speedhunters films yet... this video was shot at the FIA GT Spa 24H race this past August and features a custom music score by my man, Ekstrak out of his London, UK music studio.