This past weekend was a busy one for time attack action around the world. In addition to the inaugural Australian Super Lap event, we also saw the fourth round of the UK Time Attack series at Oulton Park. All accounts say that this round was the most challenging of the Time Attack season so far and the weather should be to blame for that one. In typically strange fashion, the weather during the event would go back and forth from sunny to rainy seemingly instantly. Thanks to Lee Chung who was trackside at Oulton Park, we have some great photos from the event. Looking through thees photos, you would think the "dry" photos and the "wet" photos were taken on different days.

Throughout the event the tricky track conditions would claim a number of a cars. This poor Evo is one of them. Ouch. No one was seriously hurt, but it did send a message to the other drivers to use caution when attacking the course.

The Oulton Park event also marked the debut of the R35 GT-R in the Time Attack series. This R35 is owned by RC Developments and was driven by Clive Seddon who pulled a lap time of 1:37.04 with Toyo T1R tires as the only modification. 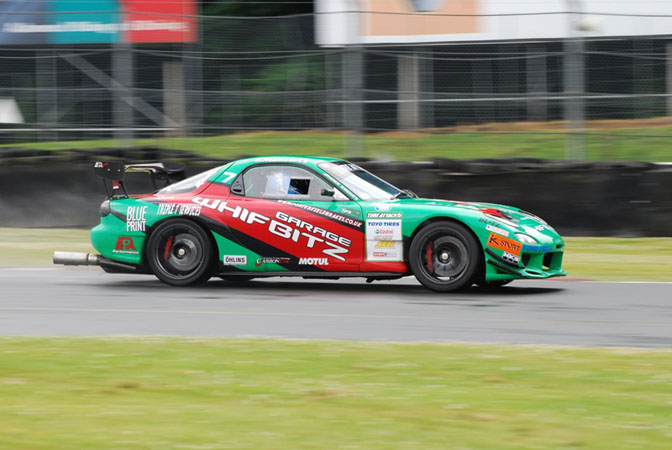 Looks like a very interesting exhaust set up on the Garage Whifbitz FD3S RX7.

Adrian Smith's wild turbocharged all wheel drive Celica was back in action at Oulton Park. This has to be one of my favorite cars in the series.

Jeff Mileham's TVR Tuscan finished second overall in Club Challenge NA Class just behind the FD3S of Craig Winstanley. Craig and his FD managed to set the fastest time even after a crash during qualifying.

3rd place in the Club Challenge FI Class went to Kev Atkins in his silver Evo6.

Kev Horsley was on top of things again in the Scooby Clinic GC8 Impreza. His lap time of 1:31.98 was good for first place in the class and it was his fourth consecutive win in Club Challenge.

In the pro class Steve Guglielmi's Lotus Elise took home 3rd place with a 1:28.03. This car must have been a beast to handle on the wet course.

Second place was taken by Tom Ferrier in the Zen Performance GC8 Impreza with a best lap time of 1:27.20.

Rather unsurprisingly , Olly Clark's GC8 Impreza dominated the event and brought home first place in the Pro Class with a blazing lap time of 1:25.983. This was Clark's third consecutive victory in the Pro Class!

If you needed any more idea of just how crazy these machines are, the lap times of both the Roger Clark car and the Zen Performance car broke the BTCC record for the Oulton Park Course.

The next round of the Time Attack series will be held at Brands Hatch on August 10th.

It was an awesome event, it was such a nice site to see the new R35 going round the track at full speed. Check out my blog for more pictures if thats permitted | http://richard-raw.blogspot.com/

The RCM Gobstoper is something else. I'd love to see them take it out to Tsukuba and see what it could do over there.