The 2008 British Touring Car Championship reached its half way mark last weekend at the Snetterton circuit in England with some classic touring car racing.

The three race event was make or break for the SEAT Sport UK team, who had been struggling for out-right pace and reliability with their new Leon Turbo Diesel. Current champion.

Fabrizio Giovanardi came to Snetterton with a 23 point lead over team mate Matt Neal with Matt Jackson in the BMW 320si points further 20 points behind. 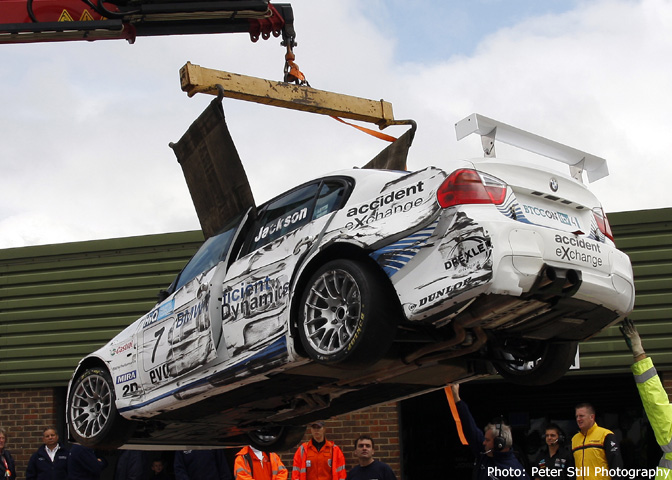 Qualifying was held on Saturday and it was immediately apparent that this circuit was going to benefit the SEAT Diesels, locking out the front row with Plato and Le Mans class winner Darren Turner. Team Dynamics seemed to have found some speed too as they lined up third and five, sandwiching Giovanardi.

Matt Jackson had a big accident damaging the left hand side of his BMW.

As the lights went out on round 16, the Honda of Tom Chilton passed a slow starting Gionvanardit to move into 4th, behind Plato, Turner and Gordon Shedden.

Although the top four stayed the same to the end of the race there was some very close racing in the middle of the pack.  Adam Jones, in the privateer Leon ran slightly off line on one corner, and had lost 5 places on the next straight!

Plato lead Turner home for the win with the two Civic's very close behind. Giovanardi was a disappointed 7th.

Round 17 followed shortly after. The grid made up from the Round 16 results made it relatively easy for Jason. Giovanardi was spun around early on by Tom Chilton and he dropped to a lowly 14th. Giovanardi's recovery was masterful and a perfect example of why the Italian is one of the best Touring Car drivers in the world.

The racing was very close, with three abreast, through the corners at times. This was classic touring car racing.

Towards the end of the race, a safety car period was required, to reposition one of the chicane barriers. Upon the restart, 2nd place Turner picked up a puncture and dropped out of contention. Turner is a great driver, as proved by wins at Le Mans, but he gets all the bad luck in BTCC. He's the unluckiest guy on the grid! 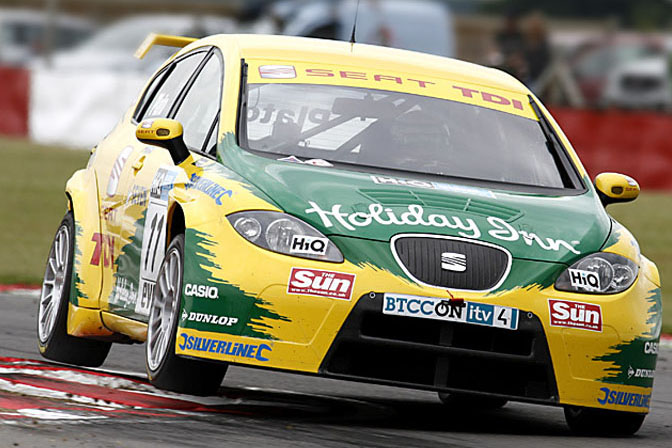 Plato took the win from Colin Turkington in the BMW and then Giovanardi who had worked his way all the way from 14th! An impressive performance.

The final round at Snetterton saw the top 8 reversed, so 8th place Gordon Shedden in the Team Dynamics Civic sat in Pole Position, followed by BMW driver Matt Jackson. Giovanardi was 6th, while rival, Plato was 8th.

The lights went to green, Shedden went backwards, Jackson took the lead with Steven Kane close behind in the similar 'Komatsu' Motorbase BMW.

Matt Jackson won, taking his second win of the season with Kane taking
his first podium. Giovanardi, once again, worked himself up the
leaderboard and finished third. Another impressive drives by Jackson
and Kane, beating the works machines.

Giovanardi (above) left Snetterton with a 34 point lead from Matt Neal (below). Plato is 3rd, a further5 points adrift with Independent, Jackson closing him down.

Some great racing at Snetterton this weekend and generally, this years BTCC has been excellent viewing, reminds me of the competitiveness of the Super-touring era of the 90's. Next round in two weeks time, if you have a chance to watch it, you won't be disappointed.

Watched the replay of this yesterday and I have to agree with the comment regarding the similarities of the 90's racing, at times it was like watching bumper cars at the fair.

Did you notice that the "swear-word filter" censored your "three a b r e a s t"? Funny.

Nice pictures. I wish we got TV coverage of this in the states.

@JBlaine - See if this link works for you fella:

Also, this should be on Speed TV towards the end of the year. Have to use yout Tivo/PVR as its often on at silly times.