Since 1949, kei cars have provided the Japanese population with a cost-effective means of transportation. These days, one third of new vehicle sales in Japan are ultra-compact cars, vans and pickups from the kei class. While the rules for the class have evolved since the early days, a restriction on dimensions, engine capacity and a gentleman’s agreement on power output have always remained in effect.

While the majority of kei cars are designed around practicality and economy, the early ’90s brought with it a trio of kei sports cars: the Autozam AZ1, Honda Beat and Suzuki Cappuccino. Each provided different driving experiences, all while making what seems like a paltry 64hp. But when you remember these cars only had to move a little over 700kg, the power output becomes less important.

I’ve known Lewis Noakes, the owner of this Cappuccino for a number of years. His approach to the Suzuki, and car modification in general, is fairly straightforward and simple: improve all aspects.

For a start, it was a rather fetching shade of metallic pink and had plenty of rust. The latter is what sent the majority of Cappuccinos to an early grave, and what necessitated a large degree of remedial fabrication work in Lewis’s car. Retro Speed Shop in Stoke-On-Trent replaced the floorpans, removed the spare wheel well and repaired other areas that had been devoured by corrosion.

At the same time, any unnecessary brackets were removed and holes filled and smoothed. A comprehensive 6-point roll cage was then welded in and the interior painted in Nardo Grey, along with the exterior receiving a fresh coat of black.

Inside, the Cappuccino’s already minimalist interior has been stripped even further. A custom aluminium dash now only has the essentials – a dash display and dashboard warning lights, along with toggle switches for the windows and horn.

The cockpit is finished off with FRP seats with Luke harnesses, a Nardi 330mm wheel and custom Delrin shift knob.

At initial glance, the exterior doesn’t look like much has changed. But looking closer, the details become apparent.

Only the nerdiest of Cappuccino aficionados would recognise the rare Japanese parts that are fitted to the car. Lewis went to great lengths (and great cost) sourcing the front bumper from Japanese Suzuki tuner Take Off, along with the Toyoshima Craft bolt-on arches. These cover Ueo-spec 14×7-inch RAYS Volk Racing TE37s shod with super-sticky 185/60R14 Yokohama Advan Neova AD07 semi-slicks.

Aftermarket FD3S Mazda RX-7 side skirts have been modified to fit, and the rear bumper has been cut down to accommodate future plans for a diffuser, with the modified Ducati exhaust muffler exiting centrally. Directly above is a trimmed down dual-plane wing that has been solid mounted to the chassis.

The upgrades continue underneath with Lewis having made a large amount of the suspension components himself. The rose-jointed control arms, nylon engine and gearbox mounts, along with the aluminium solid mounts for the 2-way differential are all his doing, with BC Racing coilovers fitted front and rear.

While internally the F6A motor remains untouched, many custom parts are bolted to it.

Lewis drew inspiration from Cosworth when fabricating the dual plenum intake manifold. While it may look odd, this design allows air entering through the Rover Metro throttle body to be pushed into the first plenum, and then move through a small opening into the second plenum. This equalises the flow, meaning all four runners into the cylinder head receive the same amount of air.

The high-mount exhaust manifold is also Lewis’s handiwork, with an uprated GT12 turbo providing boost. It’s almost comical to consider a turbo this small an upgrade, but the original can pretty much fit in the palm of your hand.

An Austin Mini radiator has been repurposed, along with a Nissan NV200 intercooler. Both of these will likely be swapped out in the future, but work well enough for now.

All of the above result in some impressive figures: 120whp versus 64hp stock, 667kg versus 725kg. This equates to a power-to-weight ratio similar to an unmodified BNR34 Nissan Skyline GT-R, but in a package less than half the size.

Power is sent through the Suzuki’s original 5-speed gearbox mated to a lightened flywheel and modified clutch. The latter was upgraded following the issues encountered at the recent Curborough Sprint Day, now using two stock diaphragms to increase clamping force.

The only way to describe the car is like a pint-sized Audi Quattro Group B rally car. The distinct three-cylinder intake and exhaust note, chirps and whistles from the wastegate and dump valve as the car is driven wouldn’t be out of place on a rally stage. Sadly, the Cappuccino saw limited running at the aforementioned sprint, but before some of us had even gotten home, Lewis already had the car on the lift and the gearbox out to make the clutch upgrade.

I’d like to think this Suzuki Cappuccino is a visual representation of the mindset Lewis embodies; not only does he has a vision of what it should end up like, where a solution doesn’t exist he’ll make it himself. While I have varying degrees of appreciation towards all car projects and builds, knowing that so much of this one has come from the owner’s own two hands just makes it that little bit more impressive.

This is the right formula for performance. Reduced weight improves all THREE metrics; acceleration, braking and turning.

Power/weight ratio only applies to acceleration. This car will have the advantage over the GT-R in braking and turning because of the reduced weight.

This is fantastic. I love kei cars. Everybody should have one. It’s super impressive all of the custom work that Lewis has put in to his Suzuki. I really hope I see this car in person one day, to see it with my own two eyes. Fantastic

"This equalises the flow, meaning all four runners into the cylinder head receive the same amount of air."
Bit of a whoopsie when describing the intake manifold there.

Pretty cool, but I am curious why people don't just rotary swap these if they want to go faster. 120hp really isn't that much even in a car weighing 700kg.

I can't really recall ever seeing one of these Cappuccinos making over 200-300whp now that I think about it. Nice car though! Looks like a fun build. Just want a little more power from it if it was mine.

Lots of swaps have been done into cappuccinos to give them significantly more power. The issue is packaging they always require a significant amount of fabrication work to fit a gearbox/rear end capable of taking the torque. Alot of people stay with the f6a purely because its got a certain charm to it, some are even north of 200whp.

Thanks for the information. I figured it was a packaging issue which is why the 12a or 13B came to mind. 200-300whp in one of these would be really fun. I drove a Miata years ago that made about 380whp and weighed ~1750lbs. Chopping another 300 off that with the same power level sounds awesome.

Yeah that would actually be very nice I'd imagine! I't so small and compact you would have a lot of choices for lines on the track and if you squared up the tires to a 225 or a little thicker you'd have a lot of mechanical grip with the right tire compound.

I wish they made more cars under 2000lbs!

This is so cool!

These cars are so much fun even in a relatively stock form. I’ve got one too that’s stock power wise just with updated suspension and it’s great fun. Not fast but super connected to the road (non power assisted steering), light weight and a characterful engine.

You’ll struggle to find anything else that will put a smile on your face like this. Photo attached of my less modified example.

My hats off to Lewis though as he’s really made a beast of this little sports car. We’ll done! 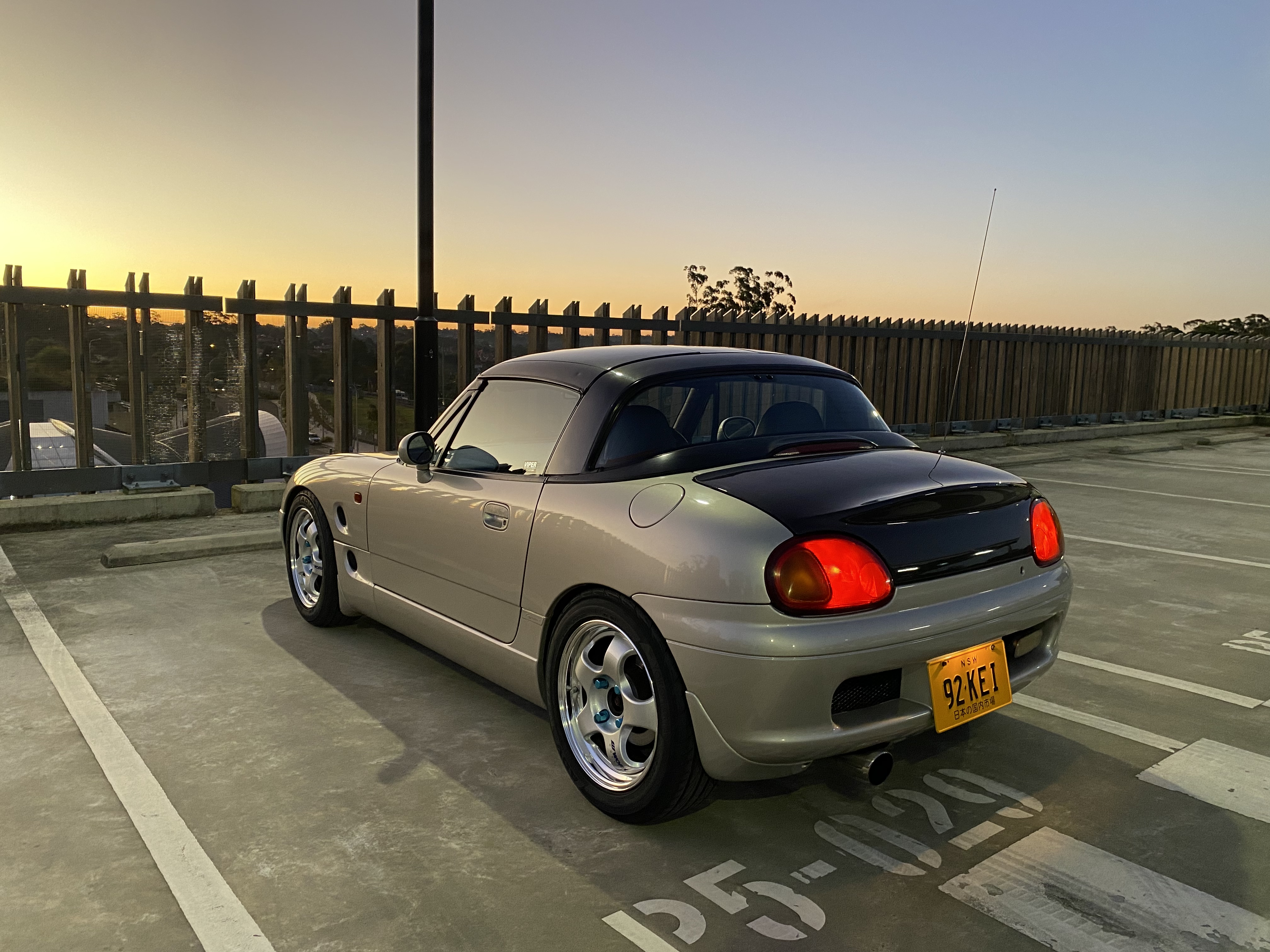 If this is the future of ICE cars after 2025... I dig it, and drive the wheels off it smiling every minute. Just hope the "chunky light assemblies" just die already. Gross even on a 996 Porsche GT2 or Benz AMG, so much more on less aggression. LED it and it's future.

this car has a special place in my heart, a forbidden fruit, i can only dream of owning one (never sold here and the collectible title is for 35+ years old cars).