SHARE A Twin-Cam Mini Seven Years In The Making

There is a rare moment when walking the halls of a show, that a car completely stops you in your tracks and draws you in for a closer look. Jayme Hill’s Mini is one such showstopper. Have no doubt – the longer you spend nosing around the finer details of this amazing build, the better it gets.

I spoke to numerous people during my day at Dubshed last month, and most of these chats had one thing in common – a question asking whether I’d seen ‘the red Mini over in the Logan hall’.

Having spent years following the build online, I knew it was going to be something special when the Mini finally emerged in a complete state. Also knowing that the build would attract constant attention during the show, I pre-booked an hour with Jayme and his car during Friday night’s show set-up so I could shoot this feature.

Let’s start outside, where a backdate has transformed the look of this late-production 2000 Rover Mini into that of a Mk1 from the 1960s. Key to this conversion are the original car’s small rear lights, the iconic early slotted grill and a set of sliding windows.

Enhancing the clean vision, the side repeaters have been shaved from the front guards, and the wipers, which now sit against an Evans Motorsport heated screen, are operated by a relocated wiper motor and extended cables from a Land Rover Defender to free up precious space within the engine bay. The intricate wing mirrors are from classic Mini racing specialists Swiftune.

Jayme’s intention for his Mini is ‘fast road’ use, but the reality is it’s more than capable of tackling a track day, sprint or hill climb. That’s obvious inside the car, where opening one of the deceptively thin doors reveals a race-grade interior.

The main features in here are a Wishart Motorsport Fabrication welded roll cage built to national rally specifications, and a pair of Cobra Monaco seats with Jayme’s personal ‘JH logo’ stitched into them. There’s also a Momo wheel on the end of a custom steering column, an exposed KAD shifter and Wilwood pedal box. The door cards, re-trimmed in classic vinyl, feature billet door handles and trim.

Despite the outward classic look and style of this Mini, Jayme has incorporated some cutting-edge technology into it, which once more shows just how a project can evolve over the course of an extended build time. With full custom wiring from GNE Motorsport, a DTAFast engine management system feeds information to an AiM PDM unit hidden under the dash, and this reaches the driver through an AiM digital display. Sitting on the transmission tunnel, a 12-button CAN pad controls many of the car’s key operating functions.

Undoing the leather straps and lifting off the bonnet reveals the Mini’s pièce de résistance – its engine. The completely smoothed bay is devoid of anything but the necessary ancillaries, work undertaken at home by Jayme and his brother in their ‘Potato Bread Engineering’ (PBE) shed.

The engine at the centre of it all has one of the most impressive specs I’ve read in quite a while. The headlines are pretty spectacular in the Mini world: 1,380cc, twin-cam, 16-valve.

Built by CC Minis in Lisburn, Northern Ireland this power plant is the stuff of A-series dreams. Starting with a 1,275cc Rover mill – exactly as the car came from new – it’s been stretched out to almost 1,400cc thanks to 73.5mm forged pistons. The block also features a custom race-spec crankshaft, steel connecting rods, ACL race bearings, and ARP fasteners throughout.

Up top, a BMW K1100 twin-cam 16-valve cylinder has been adapted to fit the A-Series block, and for extra performance it’s undergone a full port and polish. If that wasn’t enough, the bike’s individual throttle bodies have been carried over and now breathe through an ITB foam filter.

All around the engine bay, the attention to detail is never-ending. The engine mounts were custom-machined from billet aluminium, while the PBE logo has been laser-etched into the top of the oil catch can.

In its complete form, the mash-up engine is much taller than the original A-Series, but it still sits under the standard bonnet profile thanks to a well-thought-out front subframe modification.

Power is transferred to the front wheels through the Mini’s original 4-speed gearbox, although that’s been substantially upgraded with a straight-cut gear kit, MG Metro Turbo final drive and a Quaife limited slip differential. Also in the mix are MED drop gears, a billet flywheel and an AP Racing clutch.

Having the power is one thing, but being able to really make use of it is another. But of course Jayme has this side of things covered too. The use of high-end parts from suppliers renowned within the competition Mini world was core to the build, and why you’ll find custom-built ProTech shocks at all four corners, as well as the addition of KAD control arms, Classic Minis Japan ball joints and Owens Motorsport ball joint droppers. Hiding behind the wheels is a KAD disc brake setup in the front and uprated drums at the rear.

Builds like Jayme Hill’s Mini remind us just how good a simple idea can become with time and patience. Leaning on a lot of historic style and combining that with modern tech, I think you’d agree that the result is nothing short of spectacular. 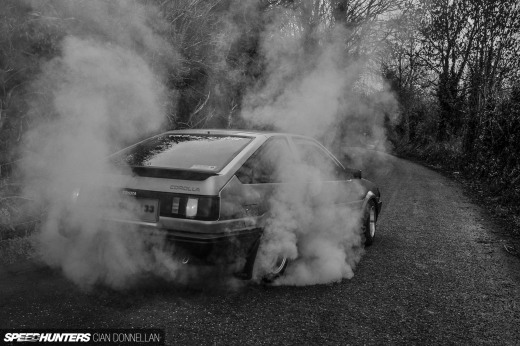 And now i'm searching all over the internet for an old mini up for sale (again).
Any idea about the engine figures? And the low profile foam filter is it holding toghether, i remember D4A had some problem with the low profile one but the high profile was good.
Oh and nice garage name btw, i like the non-cliche names.

Cian, good article, refreshing. Once in a while rather than reading post about highly strung turbocharged 1000 hp motor, a low powered, extremely lightweight agile go kart handling mini puts a big smile on my face. What's the weight? 1400 lbs or thereabout?

read the article about the austin healey sprite built by pipey mcgraw. That's what you're looking for right there

"Up top, a BMW K1100 twin-cam 16-valve cylinder has been adapted to fit the A-Series block". That's a vast understatement. It wouldn't have
Would be an interesting feature just to get a glimpse of the engineering required to make the head and block mate.

The head fits surprisingly well. You need to redrill waterholes, 7 of the 10 stud holes and run oil externally but the bores line up very well. Obviously a lot more work is needed. You can buy kits for it as well.
There's a fair few in depth builds on turbo minis dot com also.

Thanks. For sure there's a fair bit more work to making an pushrod engine into a DOHC 16v, but good to hear there's a kit. Personally, I wouldn't have any desire for a mini, but I can appreciate the beauty of how this little car has turned out.

I'm in the very early stages of building the same motor at the moment. Heaps more. Minis are fun but they aren't for everyone. It seems like people under 6ft aren't interested in buying one

Good on yah. TBH working on other student's (usually rusty) minis when I was younger, was probably enough to put me off them for life!

That's what I was thinking. How on earth did someone figure out a BMW K1100 twin-cam 16-valve cylinder would fit the A-Series block?

Actually, the first such conversion was done way back in 1989 by a bloke in Canada. It's on Youtube somewhere, I think. I am busy putting a Toyota 4AGE on a Mini 'box, having done a similar conversion back in the Nineties with a Kent...

A beautiful car in every way. Just stunning!

this is freakin cool

everything is there for a reason, and it looks dashing because of it

This is why I've switched from tuner japanese cars to older euro cars. You have the creative freedom to do crazy high-quality builds like this while not worrying about smog/tuning laws and not lose buckets of money in the process.

Absolutely awesome build, it's hard to pick out a favorite part.....

Zero access to rear seating area! Who needs to go back there in this race car anyway!! :') :')
I'm building a mini engine at the moment and that spec list is mega $$$$ - impressive kit

Perfect Mini. Any idea of the power output?