There’s a joy in just meeting car people. There’s also joy in standing, ogling at a car’s details and trying to decipher the intention of the owner. Like in an art gallery, every small and unique touch gives a clue to the personality and soul of the piece. They can be real conversation starters too.

Standing, passing time and just chatting is joyous. And Dubshed 2022 was just that.

Seeing a face with which you associate no name, but because of a shared passion you’re able to converse like old friends is the essence of any car show. People appear at these things that seem to never exist anywhere else in your life for the rest of the year, but come next year, you’ll stand and chat and still never know their name. That for me is the crux of what makes Dubshed so special.

My Venn diagram of interests within the automotive world is wide and varied with very little in the way of crossover. So, the trips to Lisburn for Dubshed have been my sole annual venture into the world of large shows. I could have included ‘Volkswagen’ before ‘shows’ in the previous sentence, but as Paddy covered recently, with Dubshed and many other events, the scope has become broader over time.

On my very first visit to Dubshed there was a small marquee attached to the main exhibition hall which housed a select few non-German cars. This year, the ‘others’ hall was almost bigger and more packed than the main show floor, but that’s not a bad thing.

As someone on the periphery of the show car scene, I come with a very open mind to things like this. Do I miss incredible period details and not obsess over the rarest of rare parts simply through a lack of knowledge? Sure. Do I think an MG ZS on bags rocking a set of Compomotive wheels looks mega? You betcha.

Ryan Walsh’s MG is the type of build that keeps me coming back to Dubshed year after year. It’s fresh, unexpected and downright epic.

No matter where I ventured at event, I always seemed to arrive back at this homage to an era when MG and WSR ruled the BTCC. An OMP cage, Cobra bucket seats, TRS harnesses and a growling 2.5L V6 K-series up front – all in, this thing is something else.

It’s cars like this one that steer, or even begin conversations on the floor at Dubshed. But it wasn’t the only showstopper.

I arrived on Friday evening after a 4.5-hour blast up the motorway notable only for excessive Dublin traffic and a never-ending scene of grey skies and light drizzly rain, in time to see the first show cars roll in.

And to shoot a very special feature car – stay tuned for it.

Fresh builds, old favourites and all manner in between queued patiently ahead of being directed to their assigned spots within the hall. Slowly, it filled up, the stream of cars growing firmly into a trickle. The air felt electric, although the strong fumes of detailing product and exhaust gas definitely helped the buzz.

It’d been three years since Dubshed had happened, and the show’s absence due to Covid left a real void in the Irish modified car scene. The event’s long-awaited return was just the kickstart we needed for 2022.

One car that grabbed my attention as it rolled in on Friday evening was Paddy Lynch’s Mk4 Golf GTI.

In a world where refined class and old school vibes have become prevalent, Paddy’s Golf has gone and thrown subtly out the window while not ending up looking tacky or distasteful. Everything about the 25th Anniversary GTI screams wild, but it feels like something I’d expect to see in coverage of a US show such as Alpine Volksfair or H2Oi.

A Golf on air is nothing new, but the addition of Recaro Wingbacks, a cage and big wing just tick boxes for me. Perhaps it doesn’t for others, but as I said earlier, shows like Dubshed thrive on cars that start conversations and get people interacting.

More so than ever, these conversations are intermingling in circles perhaps never experienced before. Here’s something designed to be the ultimate incarnation of a ’90s cruising scene icon, sitting 15-feet away from JDM icons and a display of some of the best street-styled cars that wouldn’t look out of place at Daikoku PA or TAS, on the Drift Games stand.

Even the nature of the car show itself is morphing, with more and more traditional ‘static’ events adding a live action element. Dubshed this year introduced ‘The Stages’ where tarmac rally stage meets gymkhana.

While BMWs may have been the main weapon of choice, it was Luke Woodham in a stadium truck that really got the crowd going. Again, different spheres, as I’ve never been around a truck like that before, and now I feel an urge to see these things in action somewhere.

With the way the world has been lately, to just get back out seeing faces, meeting people and joking around about cars was my personal highlight of Dubshed 2022.

I was gonna put a puking emoji and leave it at that, but I can't put one, so I guess you'll just have to bear with me and imagine it.
Imagine it right about here. --->

Thanks, have an exceptional evening folks, god bless

Of course you won't be showing us your efforts, would you? I would just love to see what is perfection in your book, before commenting on it...but you won't.

Dude we get it, you comment on almost every article (good or bad) always expressing you hate show cars, stance cars, any cars not suited to racing or your tastes. Speedhunters (contrary to the name) is about car culture at large not just racing so maybe just don't comment and don't read the articles you don't like and move on? You spew constant negativity, so shhhh let people have fun.

Lol. When will you keep these hopeless comments to yourself? I've seen numerous comments from you, and a few replies. All negative and condescending. I know my comment won't change your mind or even make you think, which I'm guessing you don't do much of anyways, but stance cars aren't going anywhere. Hell, what are people going to do when we all have EVs? Mod their batteries? MR.JDM, changing the car scene one comment at a time. Well done, I'm sure these stance guys gave your comments some thought.

Thanks, have an exceptional evening, god bless.

I don't mean to take up your time, but if you could, please imagine another puking emoji, particularly around the location of the first. Thanks again, have a great day.

We got it buddy. Just don't read the articles that don't interest your oh so perfect sense of taste.

Would you be saying crap like that right in Cian's face if you were in front of him ? Don't think so. Try to keep it your pants buddy, you have nothing to prove to show you are bigger and tougher than anybody here.

Can somebody get the ban hammer out please ? Sick of this moron.

Please feature the DriftJeep! As un-gridlocked roads everywhere fall apart and rally is still the coolest way to fly about, that might be the near-future's reality of hooning.

Golf's, E30's, and econo-euros can look pretty good with the right slamming, and the ethos just works, but some cars just don't sit right like that, even ignoring that they make no sense just talking style. Slammed benzGT/944/R8 look stupidly fugly, case in point, and glad the owners did it to prove it since video games make the idea look like a good one. Tho I feel I remember seeing a much low 944 look great before so maybe it's all in execution, but park the WTAC 944 next to a perfectly stanced and kitted 944 - yeah give me the raw racer any day, even for getting drive thru. 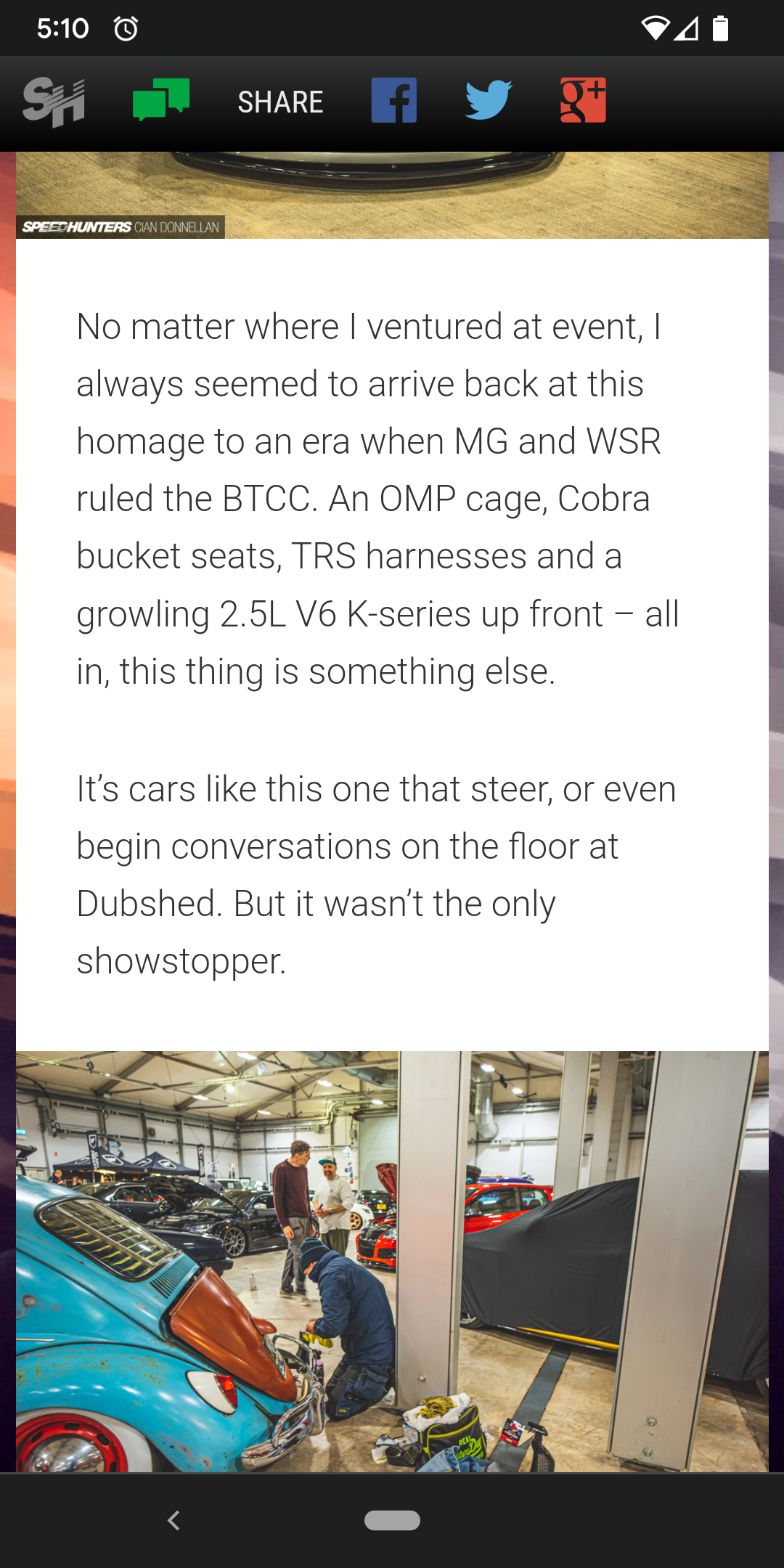 Ah the Rover K Series, I had one and it blew the head gasket twice in less than 40.000 km, great memories. Kinda.

Man I need to go to an event like this

I need to try and make it to a bigger show one day. I hit up the local stuff a lot, but something from a larger city center would be awesome to see first hand.

The bagged trend is beyond old. To each their own, but not for this girl.

Great collection of pictures mate. Nothing gets me talking to people in a show like the oddball cars that stick outs.

Usually, these people are also the most fun to talk too because they don't take themselves too seriously, unlike the 30 people who have all the same perfect-ish tailored for the event car.

In my Mopar club here, these are the Challengers people that are all the same. Then you got talk to the guy with the Dodge Omni, the AMC car or that weird old K-car based oddity and you have the time of your life.