The term ‘dubber’ invokes a love or hate reaction within many car enthusiasts.

Some will live and die by the word, starting with a Polo as their first car and ending up with Golf R, Passat R36, Phaeton or something else totally inappropriate for a brand called ‘The People’s Car’. Either that, or they’ll jump across to one of the various luxury manufacturers that are now owned by Volkswagen. After all, it’s thanks to VW that we have seen Bentley, Lamborghini and Audi thrive. Hell, even Ducati has seen increasing record profits since they were purchased by the Volkswagen Group.

My first car was an Audi, one which an irresponsible 18-year-old me turned into a little track car using zero common sense (and a lot of student loan). My dream was a Mk1 Golf though, and I actually managed to own one. Albeit very, very briefly.

Since then I’ve been a BMW diehard, and with it running in my family that’ll never change. That being said, my curiosity to see the latest happenings in the VW scene was strong and I decided to make the pilgrimage to Telford for Ultimate Dubs UK last weekend to have a look for myself.

I’ve already mentioned how much I enjoy the energy (and after party) of a setup night, but I had to see the show on Sunday with a pair of fresh-ish eyes.

My day in Telford wasn’t quite the Dub-frenzy that I was expecting, however…

As is the way with Ultimate Dubs, as soon as you walked in you were greeted with some of the finest bone-stock examples of ’90s Volkswagen quirkiness. A pair of VR6s in Corrado and Vento forms parked next to a Polo Harlequin were a reminder of VW’s sense of humour and novelty back in the day.

Immediately, the car that grabbed my attention was Reece Parr’s BMW 700 with plenty of patina. Except it wasn’t a BMW, it was a VW Beetle. Actually, it was both.

What I’d stumbled upon was a VW Beetle floorpan with the BMW 700 short body dropped on top. Air Lift Performance-equipped for maximum drop and with a shorted beam and axles, this was one tough little car parked up under the fluorescent lights.

Colour of the show for me had to go to Josh Spratt’s Audi ‘RS4’ saloon. What started life out as a standard S4 had been converted into a full RS4 wide-body, box arches, bumpers, the lot. The colour was OEM+ too, being Audi Tioman Green. Something about the paint just worked perfectly for me, even if being neither blue nor green in reality made it difficult to capture the actual hue!

Custom stepped-up BBS LMs finished the car off, marking them out from the replica LMs which flooded the market in the early 2010s, putting a lot of genuine owners off running them.

Sticking with green, this previously-spotlighted Porsche 924 looked as good as ever on its new wheels with matching race helmet and gloves on display. The retro interior was a welcome change from the current industry standard of kaleidoscope stitched leather ‘bucket’ seats.

This Golf R-shaped silhouette not only looked menacing, but had dyno charts to prove that it was producing 1,000hp. What an absolute weapon of a car, with an accurate registration plate to boot.

Jesse even made the trip over from LA in his white Jetta, and it was nice to see he’d gotten around to fitting those pesky front brake calipers…

The VIP hall was, as usual, packed with some of the country’s finest modified VAG machinery.

Also, if you like your rare models, UD is the place to be. Mk2 Jetta Coupés are like hens teeth over here in the UK.

Custom interiors are a staple of VAG builds, and the selection of the day did not disappoint. This Audi 100 Coupé for example had a gorgeous tan re-trim, with some woven accents to break up the smooth-grain leather.

Alex Wright’s Mk1 Golf, which I previously featured, has somehow become even cooler, which I didn’t think was possible.

He’s managed to further simplify his interior, replacing the entire dashboard with a blank panel and a single ‘smart’ gauge. The gauge has multiple digital readouts alongside an analogue rev counter which is awesome, and for safety Alex has hidden the rest of his dials in the glovebox instead of deleting them. Add to that the CAE shifter in black and Alex says the Mk1 is now fully complete.

I don’t blame him, I wouldn’t change a thing.

On the subject of ‘complete’ builds, there was a bright purple 6N Polo with one of the most outrageous details I’d ever seen on a show car. Custom touches such as the convertible roof and pop out windows made it stand out even in the halls of UD.

Ultimate Dubs has changed since I was there last, and in all honesty feels a little closer to the end-of-season Ultimate Stance show, as more and more non-VAG cars are permitted into the halls. That’s not a bad thing by any stretch. In fact, I think it’s better. Diversity is a beautiful thing after all. There are others who would like to see the show remain more VW-centric and I can understand why.

What I will say is, the standard of cars in the show this year was fantastic. It’s great to see that a year of hiatus hasn’t been put to waste on these builds, and that a global pandemic hasn’t put out the passion for the VAG scene in the UK.

great coverage mario and your photos are getting pretty good too!

Eh. The audi coupe was really nice, loved that.
The rest of the event looks like a lot of slow "art" cars that people "just don't get"

I believe it was engine swapped, but if not then that Audi would most likely have been one of the slowest cars at the show!

If you’re more interested in performance cars, there’s a show calk VAG Tuner Live which is mire about track cars.

So, a car show then

I always assumed that the Jetta coupe's I saw were 4 door's with welded up doors etc. I never realised they actually made one!

They’re so hard to come by, even in Europe where they were mainly sold.

That 924 is really nice, but that black RS3-powered Golf R is properly aggro looking (and I'm not typically a fan of the black on black on black look)

I think it it were a TDI it wouldn’t quite be able to pull it off, but the combo of black/carbon/wheel fitment really did work.

Does anyone know what wheels the yellow trasporter is sitting on? Those looks sick 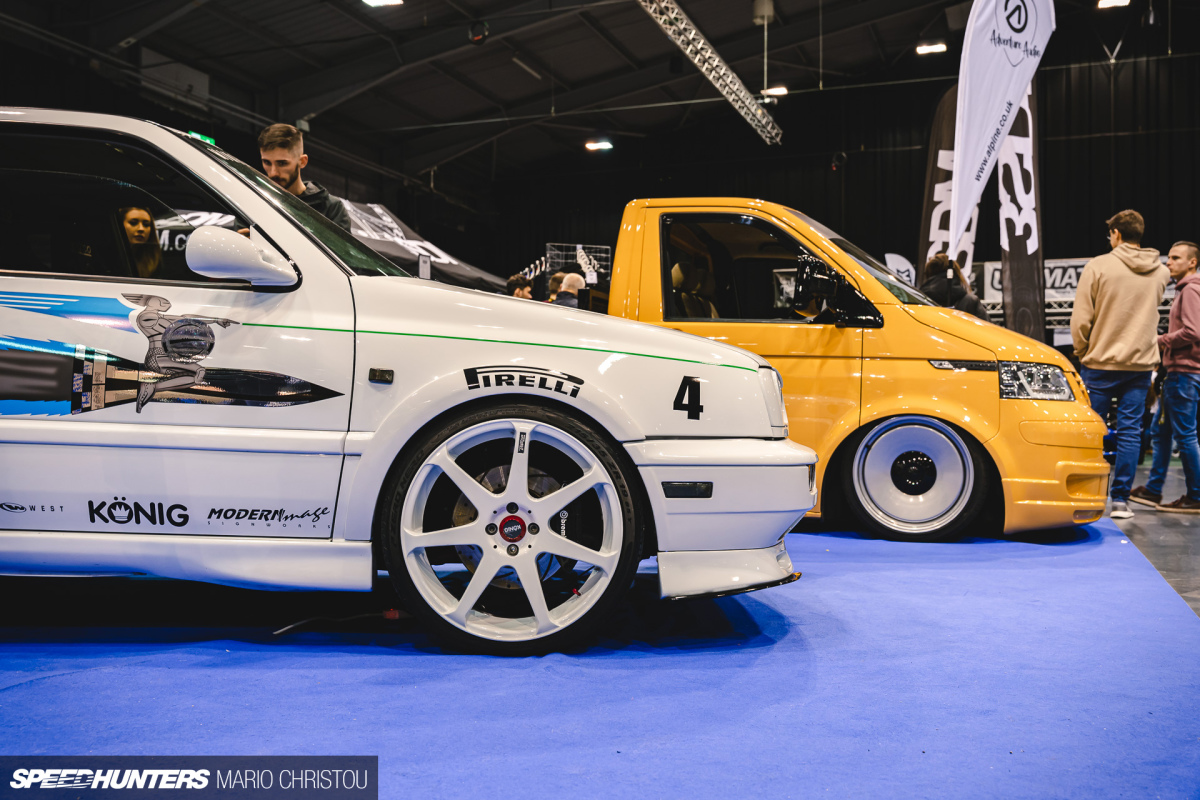 They could very well be Detroit Steel Wheels. I know some people run them on transporters.

those must be navis wheels, look up Transporter HQ

I’m not too sure unfortunately, but I believe it was on the Alpine stand!

What i love about the vdubs scene is that its been years since i picked up a magazine or went to an event, but the quality of builds, and the different mix of styles is still there and going strong !

That’s exactly it mate, and it looks like it’s not going to slow down or stop any time soon.

That Alpina 7-Series is pretty incredible.

That E38 is a 740iL with an Alpina front lip. The owner is a nice dude, and the car itself is really tidy!

Sadly no love for the vans... it's actually a huuge culture over in the UK