After introducing Project LS to the SH Garage last month, my newly-acquired Lexus is now well on its way to being converted from an ugly old tank, to something still old, but better looking and vastly improved all round. First on the list was a brand new custom exhaust system.

An easy way to get the 1UZ-FE V8 up front sounding better in these cars is to simply cut out some of the (many) factory-fitted mufflers and replace them with sections of straight pipe. I could have done that – I don’t have a huge budget for this project after all – but I’d rather do the job properly. This is where Francois from FatBoy Fab Works comes into the picture.

Having seen the amazing custom work Francois did on his own V12 twin-turbo Toyota Hilux project (which I’ll be featuring soon), I knew he was the man for this job.

Francois usually works out of his own shop in Pretoria, but he builds so many exhausts and headers for the guys at McNabs Engineering, that he’s set up his own section in their shop, which is a lot closer to me. So that’s where we decided to complete the two-day custom exhaust build.

There’s some seriously cool old school muscle around the McNabs Engineering shop, so I certainly didn’t mind hanging around the place while Francois worked his magic.

I’m quite sure that this Ford Fairmont GT will eventually be shipped back to Australia (the model was originally manufactured in Australia, but shipped to South Africa in CKD form for local assembly) as most of them have been exported in recent years.

After salivating over all the classic metal around the shop for a while, Francois got my car onto the lift to instantly reveal just how badly beaten-up the exhaust was from 22 years and almost 300,000km of use. The rest of the underside was pretty filthy too.

The exhaust system itself came off with relative ease, but the bolts on the manifold flange were seized tight. No matter what Francois tried, they couldn’t be wound out.

If you’re wondering how Lexus made the V8 in the LS 400 so quiet, here’s why…

After hammering, drilling and grinding for longer than he’d care to remember, Francois finally got the bolts removed. Now he could start on the custom exhaust.

The first job was to cut the flanges off the original exhaust and clean then them up so they could be reused with the new system.

Francois then used his TIG welder to weld the flanges onto a pair of flexis.

Even though I tried to look away as much as possible, I had to take a peek here and there to be able to shoot the photos, resulting in mild arc eye for a couple of days. Trust me, that was not fun.

Next, Francois began test-fitting pieces of 63mm stainless steel exhaust piping, measuring then cutting and tacking on new sections as he made his way down the car.

By the end of the first day, Francois had completed the front sections, plus the important x-pipe in the middle. There were no mufflers fitted at this point, but that didn’t stop me driving home for the night. And yes, it was LOUD.

I must admit, it was fun though, and the cold-start the next morning was pretty crazy.

The next morning, after a return 30-minute drive to the shop, Francois got straight into adding two small resonators plus a pair of oval mufflers right at back of the car, and all the required stainless steel piping in between. After lining it all up, the final welding took place before the exhaust hangers were added.

Looking at the finished product, I was amazed by how well it came out. The overall design and Francois’ workmanship is perfect.

My eventual idea is to do cut-outs in the bottom of the rear bumper so the exhaust can exit there, but before that happens the car needs to go in for a full respray, so Francois just angled the exhaust ends down factory-like as a temporary solution.

The best part of the exhaust is obviously how it sounds, but don’t take my word for it, just have a listen above. It has a really nice deep burble on idle, without being too loud, and there’s no drone at cruising speeds. Then, when you really step on it, it sounds epic.

What’s next? Well, as we speak, a bunch of Air Lift Performance suspension parts are on the way, and I think I’ve finally settled on a new exterior paint colour. More on those things next time.

I'm very happy with the outcome

Sounds amazing. Looks like artwork!
Emissions laws in South Africa pretty relaxed? Just noticing your new lack of cats (not hating, I live in the US with a bugeye WRX that lost its cats somehow too)

Yeah man, the guys work is proper. Hahah what emission laws, yeah here it's super relaxed when it comes to that

Emissions don't get checked on used cars over here

Captain de-cat will kick you in the balls! Brilliant craftmanship though.

Haha lucky he doesn't get as far out as South Africa

At first I was pretty disappointed - are my headphones turned down? why does it sound like a boring econobox? Then the camera changed, and I realised I was listening to the car before the new exhaust

Hahah yeah it's crazy how quiet it was before

Hi Stefan,
Hoe gaan dit?
I was excited to see your new project in your earlier post but was too late to post a comment.
I was working on a 94 Celsior some years back and can't stress enough the valuable resource that is clublexus.com. You can join a passionate community that absolutely loves the Lexus LS/Toyota Celsior.
I started a thread there, Project Celsior from Nam (Namibia) keeping post of my progress until I had to unfortunately sell my baby due to financial issues.
Good luck with the build. I am following...

Yeah I joined Clublexus as soon as I got my car.

Sucks you had to sell yours. Maybe you can find one again

Yeah looks like someone went off-roading with the car

This kind of thing has always fascinated me about cars - the New right next to the Old. It's one of the uniquely satisfying things about doing brakes, for example.

Not sure I can get behind this one. Much engineering might went into making the LS one of the pinnacles of Japanese luxury. Seems that this car deserves to be restored, not turned into something it can never really be. It reminds me of the huge drag race diesel pickups, just why? Maybe I'm just too old? But beautiful job on the exhaust, proper good job.

I get what you are saying.

If I could find another one in SA, I'd buy one and make it as good as new. But for the price I paid and my goals with it, I think the end goal will be good.

No more purring kitty, I guess. The cat is all grown up with the new stainless steel piping.
Any idea if the car gain HP after the exhaust swap, Stefan?

You mean sleeping kitty. There was no purring, that's how quiet it was.

I haven't done any tests, but I'm sure there might be an HP or two. Does feel a bit nippier.

Wow , wasn’t excepting to a see a xy gt in the back ground in this article, just a cool 150 thous (AUS) sitting there lol
Loving the Lexus article btw such a iconic car

Hahah I know right. It's most likely heading to Aus soon

V8s always sound better with freer-flowing exhaust, and this puts a big smile on my face just listening to it.

P/s how much did your neighbours hate you when you drove it home without the mufflers?

Not as much as my wife did that night. Not even I'd be able to live with all that noise 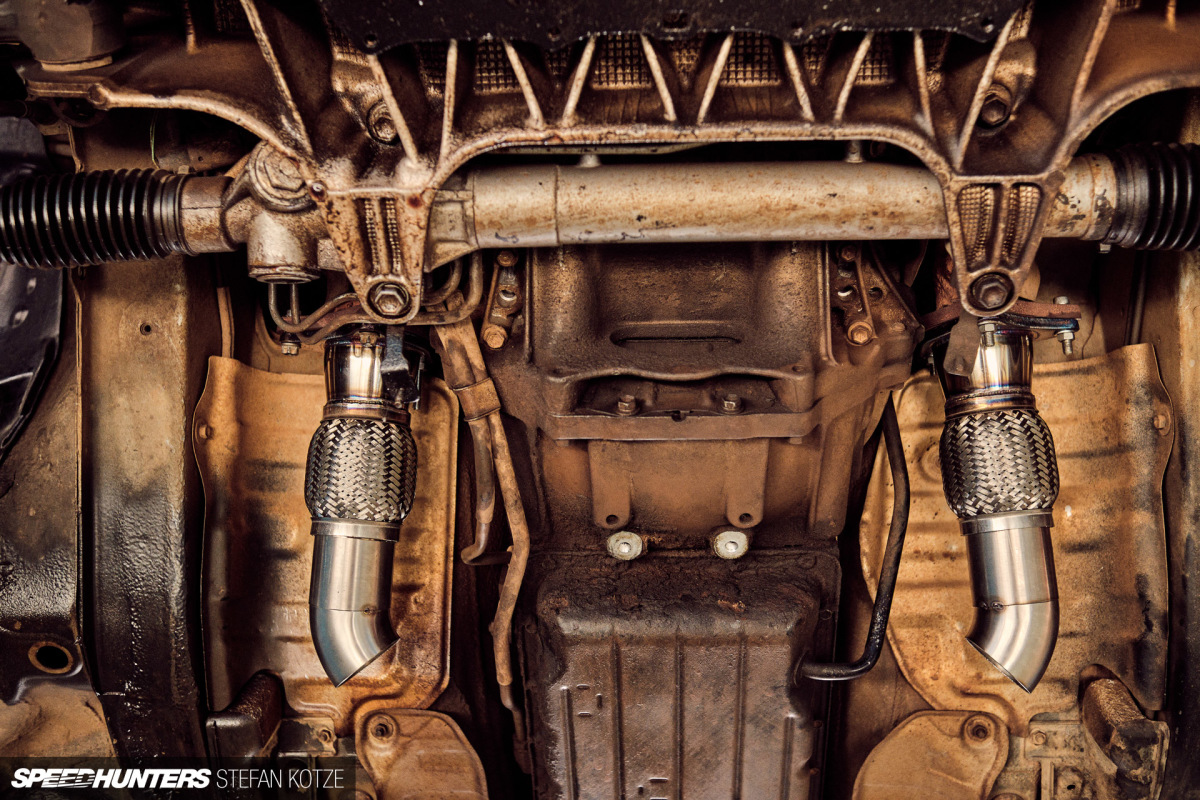 I thought straight pipe would be cool, but driving it for one night I realised I would go deaf and mad.

Oh I'd love to see the look on the face of the young upstart tailgating you on the N1 in an old Polo Vivo when you give him a taste of that noise!

Hahaha so true. That's one nice part about it still looking a bit rough. I start it up in parking lots and people go like WTF

Very Nice work. Amazing how improved the sound is and the car dropped 100+ lbs of weight. I have a C5A6 with a 2.7T and deleted
the stock silencers/mufflers. Same thing. Love the shop also and Fat Boy Fab Works !!