SHARE First Out: Classic Spotting At The Breakfast Club

First, a confession: I’m slightly addicted to weekend breakfast meets. I’m one of those annoying people who doesn’t mind getting up early — especially when it’s a dry, bright morning and my car’s out front, ready to go.

I like it that no-one else is up yet, and I can escape for a few hours, dodging the various chores and, urggh, endless DIY jobs, that usually take up so much precious car time.

Those early mornings are even more appealing when at my planned destination there’s the offer of coffee, a breakfast bap and the sight of over 200 modified, classic and even modified classic cars.

Yep, this is the perfect way to spend a Sunday morning — even in the dead of the British winter.

January in the UK usually means tumbleweeds when it comes to car shows, but you can pretty much guarantee that the average breakfast meet will keep going all year round, whatever the worst of the weather will throw at us.

And since 2019, for car freaks in the south west, that means heading to the city of Bristol for the QS Car Club’s regular new year opener, the Queen Square Bristol Breakfast Club, next to Millennium Square down by the city’s historic docks.

It’s an incredible setting for a breakfast meet, with the QS Car Club’s Dan Grazier and his small but enthusiastic team of helpers filling every area of the square’s amphitheatre and surrounding areas.

Despite negotiating more space from the city council, there’s still room for ‘only’ 220 cars, which means Dan has to effectively curate the over-subscribed applications for a parking space rather than open the meet up to everyone. While this does give rise to some cries of exclusivity, it does mean you can guarantee an incredibly diverse selection of cars of all ages.

…To bonafide design icons, there’s guaranteed to be something for everyone.

Yes, even a genuine British Telecom Austin Maestro van from the 1980s.

And some amazing ratites, too. I’ve never seen a 1992 Toyota Sera on UK soil before, but there was one at the January meet in all it’s butterfly-door’d glory.

Or this Mk1 Ford Escort Sport. Now, Mk1 Escorts maybe 10-a-penny but Sports aren’t — they’re always overshadowed by the bigger-engined and better-equipped RS models. The 1,300cc Sport only sold in small numbers and for a few short years, so genuine survivors are few and far between.

Resplendent in Vista Orange, this one belongs to the appropriately-named Sean Forde, and despite having a number of choice classic Fords in his collection, the Sport, wearing obligatory Cibie Super Oscar spot lamps, is his favourite.

Modified classic Minis are nothing new, but we’ve yet to see one quite like Mollie Challice’s. There are purposeful details everywhere, including swaged holes in the A-panels and rear valance…

…And the 1,275cc motor running a Vmaxscart suck-through supercharger setup, with a Weber DCOE side-draught carb. The 115bhp is more than enough for such a small car, and it looks and sounds incredible.

As does this Datsun/Nissan 240Z, the L-series engine running obligatory triple Webers.

In the weeks leading up to the meet, Dan let it be known that could could well be the last one at Millennium Square. With Bristol adopting the UK’s Clean Air Act this year, which effectively ‘fines’ owners of cars built between 2005-1982 the sum of £9 (around US$13) per day for driving their cars in the city, and with the council increasingly reluctant to grant permission for the gatherings at the square to take place, this particular Breakfast Meet’s days could be over.

But it looks like the QS Car Club have been given a reprieve and there will be at least one more Millennium Square meet in 2022.

Not that the club have got much to worry about — they already hold regular meets and runs out, outside of the city, and if their Facebook group is anything to go by, these are only set to increase.

Glancing at my phone, I realise it’s already 11:00am – time to head back home to start that long list of DIY jobs I was tasked with the night before. The early morning run out will almost make doing them a pleasure. I did say almost.

Back For Seconds
ADVERTISEMENT 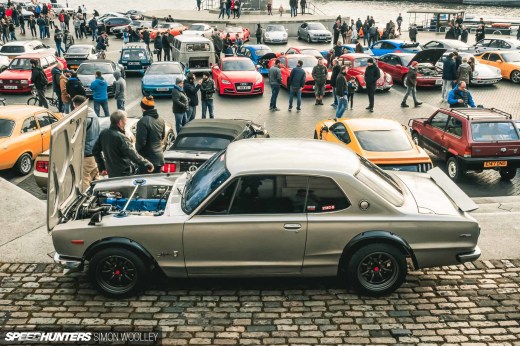 Give Out, Don’t Give Up: The Breakfast Meet That Refused To Die

Wow this could even be the equivalent of Radwood lol!
Lot's of great cars here more than the eye can see!

I guess paying an additional $13 wouldn’t be so objectionable for a chance to go to a meet for some coffee and to see some cars.

not gonna lie, pretty glad i dont live in a literal dystopia where you cant drive what you want where you want... not being able drive a pre 2005 car into a city is probably the wrong way of going about getting cleaner air

Gambit --- Get out of here with your common sense, it has no place in Modern Society.

You can drive in the city, you just have to pay for the privilege

Simon
Did you realise that the clean air zones don’t charge classics? There’s no charge for me to drive my woody into Bath. Kind of wrong when it’s a clean air zone! Anyway, it’s no reason to stop Classic car meets

Hey Gavin, the charge will apply to most cars registered between 1982 (40-year rolling) and 2005, so that’s a big chunk of what we’d recognise as classics

So glad to see no one is wearing those ridiculous masks.

very nice. The bonus pix of the MB and VW waggen are great. I just sold an Audi C5A6 to a fellow in Houston, TX and has plans for a v10 + 6speed conversion !!

I'm not an expert in old tin but the car in image 47 requires a feature.

cool pics though and a great mix!

I went to one of these before COVID hit, absolutely awesome fun; makes me proud to be from Bristol!

Yay go Brizzle! I really must pull my finger out and go to one of these again.....

"Clean Air Zones/ Low emission zones" - Cars manufactured between 1982-2005... an additional daily tax for vehicles of that age, when driven in/through certain cities? Dystopian at best. Forget car enthusiasts, think about all of the working class people who drive older cars because they are just trying to make ends meet, driving to and from their low wage job, 5/6 days a week... now they need to pay and additional tax just to earn a living and feed their family? How can this law be ignored insofar as its impact on the poor/financially less fortunate. "Out of touch" doesn't even scratch the surface when characterizing the modern politician/ bureaucrat.

Beautiful cars, but this world is in a truly sad state of affairs.