Tokyo Sky Tree, Nagano Snow Monkeys, Tottori Sand Dunes… Japan has some very special places of interest. But not every spot is listed on Trip Advisor.

You won’t find Top Racing Arts’ HQ in Kyoto on tour maps for backpackers seeking to find the real Japan, but it’s a must-see for any petrol-head seeking salvation of a mechanical kind.

I was recently down in the Kansai area of Japan for a few scheduled shoots around Osaka and Kyoto, one of which took place Kei Muira’s shop. I can’t show you that one unfortunately, as it’s for a super-secret project, but I can show you around Japan’s most beautiful city, and check in on a couple of Miura-san’s other builds at TRA Kyoto.

It had been over six years since I was last in Kyoto, and on that occasion I was one of the 85 million tourists who flocked to the nation’s cultural capital each year. I remember standing patiently for what seemed like an eternity for people to pass by, so I could take semi-clear photos of the iconic landmarks around the city.

This year, however, the streets are all but empty and I basically had the place to myself. It was a little too quiet though, slightly eerie, and a reminder that, despite the low rates of infection and relaxed lockdowns, Japan has not been spared from the effects of Covid.

Given I was here for work, I didn’t have the luxury of visiting as many landmarks as did all those years ago, nor was I able to be there for the magic light of golden hour. But it was fun shooting around the city all the same.

You might have caught Dino’s story last month, when he dropped by TRA Kyoto to hang with Miura-san and check out a new Sunny project. If you missed it, now would be a good time to have a look, because the USDM B110 is very nearly finished and you’ll see some update photos in just a moment.

Like a man possessed though, Miura-san has yet another project primed to hit the drawing board, or should I say primed to be 3D scanned. Can you guess what it is?

With a little time to kill after my secret business had been completed, Miura-san suggested I take a look around the workshop complex. I knew exactly what I wanted to look at.

Of all Miura-san’s previous builds, the Pandem E30 is one of my absolute favourites. I always say I’m not really a BMW guy, but there are so many exceptions to the rule and this is one of them.

I’m also not really a bolt-on-bodykit kind of guy; I much prefer the smooth lines of a wide-body that has been moulded, welded, filled and painted. But again, there are so many exceptions to this rule too that I probably should just embrace all styles equally.

Since Dino’s visit, the B110’s engine is in the car and running, the body panels have been painted, and all that’s really left to do now is reassemble the interior. It’s such a deceptively simple looking build on a great little chassis, and I can’t wait to see it out at some events, maybe in time for the peak of summer? I’m sure Dino will have a full feature coming Speedhunters’ way too.

If you guessed Hakosuka for Miura-san’s next project, you’re correct. Let’s take a closer look at what he’s working with…

Previously tracked, this Skyline has definitely seen better days. I don’t think it’s been neglected, just well used, like a child’s favourite toy that spends its life getting chucked in and out of the toy box and raced through puddles and sandpits.

As you’d expect for a circuit racer, the interior is completely bare bones. I wonder if Miura-san is going to retain this look…

The previous owner had attempted a pseudo kaido racer vibe, but didn’t make it past the test-taping-the-flares-on stage.

Personally, I really hope this Hako receives a proper wide-body kit, but whatever direction Miura-san takes it, he’s pretty much certain to set the internet alight. Again.

wonder what the plans are with that x5

With any luck it will be recycled into a nice coffee machine.

Am I alone in this place where Datsun B110's and 510's and Kenmery's are way more desirable than Hakos?

Miura looks like a live-action version of the main character from a 70s Super Robot anime series.

I think he would take that as a compliment!

As it was intended.

Nice Article with exquisite pictures.
I love the mood. It makes me feel like a kid looking around in the garage of your cool Grandpa or uncle.

I like the JDM-Stuff, but pleeease show me more of that widebody W201. This thing is on point as hell.

Ohh man that white S13. I hope they get it back up and running, it's a classic now.

Yeah I agree, it would be great to see it refreshed and doing some promo at events.

Any chance to get news about that sweat looking Datsun 1300 Pickup that Miura-san had for a project while ago?
http://www.speedhunters.com/2018/03/kei-miuras-next-project/ 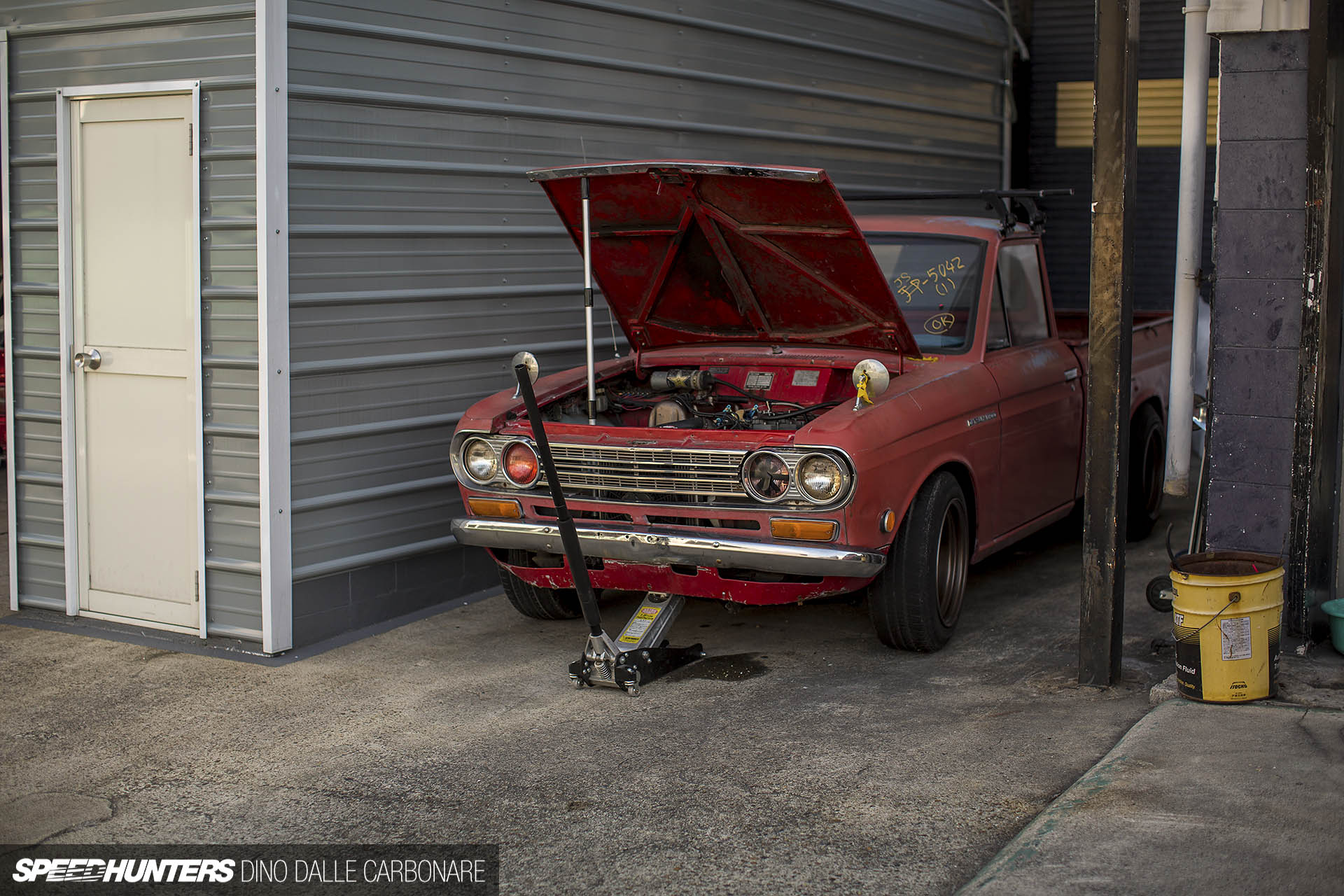 I’m not sure, I didn’t see it while I was there, but it may well have been in one of the workshops!

Loved the scenic pics in addition to the car pics; sets a nice backdrop and puts the visit in context. Beautiful!