I first met Nakane-san whilst shooting Porsches at Garage Abe, a little shop near where I live. After the shoot we stood around talking about cars, and naturally the Renault Turbo 5 popped up as a personal favorite. Nakane-san casually told me his friend was restoring one at his shop, and asked if that was something I might be interested in covering for an article. Luckily, I know the Japanese word for ‘wouldn’t miss it for the world’, so we booked in a shoot for later that week.

On Friday afternoon we set off from Fujisawa to the other side of Tokyo and into Saitama. This was my first time traveling through Tokyo this year – for obvious reasons – and it was nice to see Japan’s capital city from the comfort of Nakane-san’s Nissan President. It was touching 38°C (100°F), and he graciously blasted us with cold air conditioning, even though I knew he was cold.

We arrived at what looked like a steel fabrication factory, and inside were greeted by Higashitani-san, who graciously accepted a bouquet of orchids from Nakane-san. They both lit the first of many cigarettes and proceeded to catch up, as old mates do.

Nakane-san’s nonchalant manner severely undersold the shop we arrived at. This was in fact Auto Project-D, a retail, tuning and custom body company with some serious European pedigree in Japan. Starting in 1990 as an importer of new Porsche 911s and Mercedes-Benz AMG models, they’ve expanded over time and now import all manner of neo-classical vehicles, from Aston Martins to Ferraris and Lamborghinis. Higashitani-san has a particular taste for the ultra-rare stuff.

As they chatted I was wondering where all the cars were, until finally I was ushered through the workshop, past a Ferrari 360, a G Wagon and a 6.0L AMG W124 on a flatbed, and out the other side across a demolition site, past a collection of cocooned exotics (including a Lamborghini Urus) and down a narrow alley, until we finally arrived at a large storage unit shimmering in the late afternoon sun. My tummy turbo began to spool at the thought of what could be inside. The Turbo 5 perhaps?

The lights flicked on and I immediately knew I was somewhere special. The unit was literally floor to ceiling with exotics. A stunning gold 1972 Porsche 911, a menacing and super-rare Mercedes W124 E36 AMG, and a ’58 Corvette in Snowcrest White with red leather interior all screamed for attention.

But the two noisiest kids in class were definitely the red Lancia Delta Integrale and the Ferrari F12 Novitec N-Largo S with a full carbon fiber body – a ‘One of One’.

Naturally I was drawn towards the rally-bred machine, but the all-carbon monster was pretty sweet too. If you want to geek out on the specs of the Ferrari, head over to the Auto Project-D website and print out the spec sheet and keep it for those days when you need reminding that there is still some good in the world.

I snapped away but could sense that time was of the essence and Higashitani-san was a busy man. We wrapped it up in the main warehouse and headed over to yet another complex. Well, an old family home with a small fiberboard shed in the garden… This was it, the car I had come to see, and one I’ll bringing you a separate story on very soon.

I fired of my shots as the sun set and we called it a day. Actually, I call it a very special day, shown around a very special garage with my new friend Nakane-san in 38°C heat in the outskirts of Tokyo. I need more friends like this. 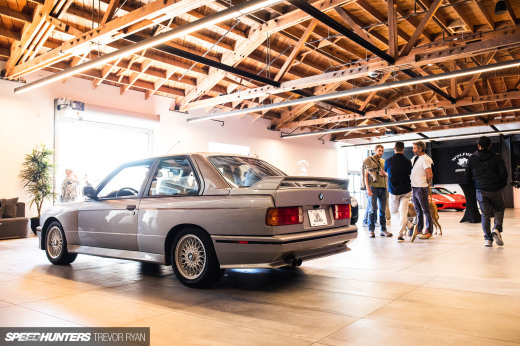 I remember seeing a Rosso Corse N-Largo (was the only one in Qatar at that time) when I was a in my early teens. My jaw dropped back then and I'm pretty sure that I'll cream my pants if I see an all carbon one. What a stunning machine that car is!

should have voted republican, not only is that car too loud and uses too much gas the fact you can even steer it is a threat to the state - plus why do you have so much of everyone elses money that was earned but is not yours that you will now hand over or go to prison.

aguy makes a joke and you have to go ahead and make it political? Please remember that not every single human being on the world (and on speedhunters) is American and cares about your petty politics, you loser.

Although I'm not American, calling that person a loser is pretty silly. I don't care about American politics, but to them it is a big deal and we should respect that. I personally hate people who make political comments, but your response is even worse than the political comment. There's no need to call someone a loser just because of a comment they made. Thats just my opinion.

Newsflash min, politics cares about you and it has systematically run through the auto industry and has taken away tuning and customization - the core of speed hunters at every level, in every country and I think whats clear here is that you don't like having your politics thrown back in your face and like every socialist you go around telling other people to be quiet. The California tuning scene has been decimated by the left, business here either can't sell, are heavily monitored, moved or were fined out of existence - people are smuggling air filters in from other states. Australia is another great example of oppression in tuning cars. They are even stoping and fining stock Ferraris in many leftist beach towns now like laguna beach - think about that, no Ferraris south of Newport on PCH. But I guess you don't care so long as you can go around smug, obviously thinking you have the right to tell other people what to do even as it eats the very thing you are here for. Atlantic City, New Jersey is heavily leftist and look what they did, crushed the tuning scene through heavy enforcement, massive fines and confiscation for a week, I guess you are ok with that.

"Australia is another great example of oppression in tuning cars."

Really? I live on Bondi Beach and have modified cars for 20 years. Got away with a lot less in early 2000's than I do now.

Regardless I think the point that was being made (and I disagree with name calling as well) is telling some one they should vote republican assumes we are American. I don't that anyone is naive to think they are immune to politics but I think its fair to be able to read a story on a global car website without an American telling a bunch of people not from America how they should vote in an election they cannot vote in yeah?

That Mansory Aston Martin Vanquish though...

The car that least appeals to me is 100% the ferrari status symbol I honestly do find them boring I can tell you stats on most cars apart from exotics they really don't do a thing for me. much sooner drool over the amgs and I'd sooner use the ferrari as a daily so as not to ruin the other cars.

XD, i'm just ranting over that Mercedes, I don't know why but those and 190E Evo 2's look really cool.