My name is Mathias Johansson; I live in Sweden and work at Toyota Center Gothenburg. This AE92 Toyota Corolla GTi has been a big part of my life for over a decade and a half.

I bought the GTi from an old lady back in 2004; it was in really good condition with just 65,000km on the clock. At first I just used the Corolla as a regular, everyday car, but in this standard form I also took it to Mantorp Park for a circuit event called Japmeet.

The following year I changed the exhaust, suspension, brakes, wheels and tires, seats, and belts. A little while later I purchased and fitted a 4A-GE 20-valve ‘Blacktop’ engine with matching 6-speed gearbox from an AE111 series car, which turned out to be a really good upgrade for track days.

2008 was the turning point. I had a planned to modify the firewall in order to mount a bigger air intake for the engine’s quad throttle bodies, and also needed to take care of some rust repairs – a common problem with any Japanese car from the ’80s.

Well, the Corolla ended up being completely taken apart, which then led me to think that a rear-wheel drive AE92 GTi would be a lot more fun than a stock front-wheel drive one.

If I was going to do this, the car still needed to be road legal, so I contacted a organization we have here in Sweden called SFRO (Sveriges Fordonsbyggares Riksorganisation). This is an agency that oversees all stages of an extensive custom or scratch-built car build through regular inspections, allowing it to be put back on the road legally with a brand new registration at the end of the process. This is why my Corolla is now recorded as a 2017 model, not an ’89.

After consulting with the SFRO, a plan involving a new tube-frame chassis and a bigger-than-original engine running in a rear-wheel drive configuration was made.

At first, I had my mind set on a Toyota 3S-GTE Gen 4 engine, but when a damaged JZA80 Toyota Supra twin turbo came up, I jumped at the opportunity to 2JZ-swap my Corolla.

Following on from a lot of planning, in December 2009 I sat the car on a special bench I had made, and took to it with a grinder. When I was finished, only the roof and doorways were left. Now the real fun (and work) could begin.

As I was doing nearly all of the work myself and learning along the way, tube-framing my Corolla wasn’t a fast process. In May 2013, the car was finally sitting back on the ground with its new engine and driveline combination in place. An SFRO inspection then took place, at which time a brand new frame number was issued.

The main bodywork and interior fit-out followed, and in September 2017 the car was ready for its last inspection. After many years, my GTi was back on the road, but now with rear-wheel drive and a single-turbo six cylinder making 400hp.

Building a car that no-one else has was a big challenge for me – one that took eight years and 6,500 hours all told – but doing so with the goal of having it street legal was even bigger. The only work I didn’t do was the paint, and I also needed some help with the electrical wiring. You can check out the full spec below.

I built this car for track days, car shows and everyday use, but I don’t think it will ever be done. There are still a lot of plans for it; next up is to make molds so I can redo all of the body panels in fiberglass or carbon fiber.

Another build will happen one day too, and it will likely be a pick-up, either from Japan or USA, with a big engine. Time will tell… For now, I’m just happy to be able to enjoy my one-of-a-kind Corolla GTi. 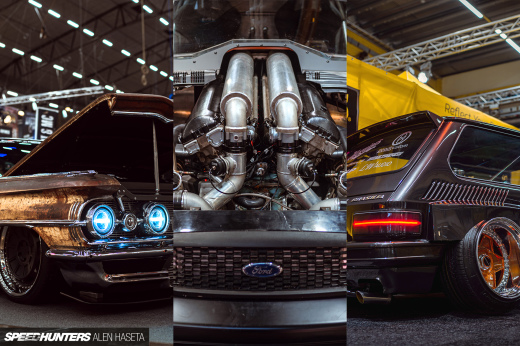 The scale and quality of the project are insane. It looks crazy and perfect at the same time. But what the most valuable is:

. No matter how extreme the project, no matter how long it took to finish it, the real value what you learned during this exciting time of building a dream machine.

This is one of thise builds you see that really inspires you to keep going with what you're working on, nothing's worthwhile is ever quick and easy. Fueling the passion and working with a goal in mind pays off dividends. Lots of respect to Mathias, it truly looks one of a kind.

Could not have said it better. Incredible car! My favorite so far in 2020.

I have to agree well done man well done!

Now this is a proper build what a car . Well done real top work and thank you for sharing with us

This is what Speedhunters is all about. I think this might be my favourite article of 2020 so far

Dude! Staggeringly awesome. Congrats on this build. Goes to show what time, money AND incredible passion can accomplish. If you have a build thread I’m sure lots would love to see that too.

One of the hottest cars ever seen.

Impressive build! I like how the wide body kit is blended in to the rest of the body work.

I've seen pictures of this thing unfinished and at the time thought, MAN, I can't wait to see this completed. It has definitely topped my expectations. Congrats, this is a top quality build and cemented in my mind as one of the wildest and greatest swap builds I've ever seen.

I see bonnet bits borrowed from a GT-Four in that hood!

WOW! Great build! I hope one day my fd3s is this clean and well rounded.

This is one spectacular build. Virtual internet sixpence duly duffed!.

And I love that you guys have something like SFRO that are willing to actually work with you on something like this. Here in Denmark (20km from Sweden), the chance of getting a build like that registered is somewhere between slim and none :/

They are getting more serious now though. A lot more rules to follow when wanting to register a car as an amateur build I’m afraid.

Still better than here where we (more or less) have one desk jockey who's only job is wielding an old school rubber stamp that says DENIED! ( :

Wow this is fantastic.

Man, base on everything I read it just made me feel like I will like to drive that thing. Nice job brother.

This is one of the Best Cars I've ever seen. and Definitely the Best Corolla the world will ever see.

A.MA.ZING!
Unique and beautifully executed, and done by yourself. Who would have thought a Toyota could be a desired car....... Well done

i swear i've read this earlier and now there are more pictures at the beginning of the story that are so cool. I'm glad I opened it again to look into the pictures.

Mathias first of all congratulations. I have been reading speedhunters for 7 or so years and your modified Corolla IS THE BEST. Better than any featured in tis website, period. If one day you want to sell it then please contact me. Speedhunters can give you my email. I would rather have your car than even the prettiest celebrity! That is a strong statement

Love the Build! the quality, te swap! the details!! congrats to the owner. This type of articles is the essence of SpeedHunters!

Great build. Impressive in every way.

This car inspires me so much. Waiting for the right things to fall into place to build one like it but less extreme (without the custom tube chassis and the 2j) but reading this article now it bothers me because he said its one of a kind and i dont wanna make him upset knowing there is another one out there.

Well made build and well done to the owner. I can only imagine how many time your knuckles have bled with all those times you pour into this build.
Any videos of how it goes on the track?

Of course there are people who will say that rotaries are unreliable but if you know how to work on one and maintain it well, it can gives miles and miles of joy and there's just something special daftsex about the rotary especially in Mazda's sports cars like the Cosmos, RX7, and RX8
I would love to have either a RX7 or RX8 once I can do better time management and maybe once I save up a little