SHARE Has The Stelvio Pass Become A Victim Of Its Own Success?

The Stelvio Pass is both a unique geographical wonder and a major engineering achievement. At 9,045ft (2,757m) above sea level, it’s the highest paved mountain pass in the Eastern Alps, and as such it’s featured numerous times in automotive television shows, magazines and websites over the years. Quite simply, it’s breathtaking.

Recently, I made my second visit to famous road on the Northern Italy and Switzerland border, and on this occasion I couldn’t have timed it better.

On my first visit here, I made the mistake of heading up into the mountains a little late, so by the time I arrived at the peak it was dark. That’s one of the reasons why I wanted to make this journey again, and this time I built an extra couple of hours into my schedule.

Even though we were driving a little rental Fiat 500, my body and mind felt the adrenaline rush after tackling the pass’s 60 hairpin turns. Road ‘SS38′ is short for ‘Strada Statale 38′, but I like to think it stands for ‘Special Stage 38′, such is its rally-like nature.

In 2007, one famous British car show named Stelvio Pass the ‘Greatest Driving Road in the World’, and ever since then SS38 has been a victim of its own success. During the holiday season, the road is such a hot-spot that it’s impossible to get a clear run up to the peak. That said, the authorities have been improving the pass for the increased traffic, adding little pockets and run-off areas so that slower traffic can safely pull over the side of the road and not hold others up.

If you’re a driving enthusiast, I feel like the best time to visit is in autumn as it’s far less crowded than it is in summer, but the later you leave it the more you risk bad weather, or missing out completely as the pass is closed from November to May. On this dreary September day, only a few cars – Abarths mostly – squeezed past us coming down the pass as we made our ascent.

You might wonder what the typical soundtrack on a mountain pass in the Alps is. Wind? Engine roars? There’s both those things, but mainly it’s cowbells and the occasional moo.

While I was photographing the surroundings at the peak, the weather really closed in with more snow. Unfortunately, the valley and cascade road was barely visible.

I met two guys up top, and they told me that there was an Abarth club meet happening at a nearby town, and around 30 of the members had been driving the pass for fun, which explained the oncoming traffic we had experienced on the way up.

Soon after, a red Mazda Miata reached the parking lot. Being a Miata owner myself, I was a little envious and had to go and have a chat to the owner. This particular NA version has had a later NB model BP-4W 1.8-liter engine swapped into it, and combined with semi-slicks it’s surely a recipe for fun times on the pass.

The Miata owner told me he was taking part in The European Mountain Summit rally with a few friends, and that soon enough there’d be a many more cars emerging from out of the mist.

Over the next hour, an eclectic mix of machinery, from classics Minis and BMWs to Jaguars and even a Mercedes-Benz Unimog arrived at the top of the pass. Apparently there was even a limousine in the rally, but I’m not sure how that would have fared with so many tight hairpins.

For me, this 1977 Opel Kadett GT/E was the highlight. This model was one of the Golf GTI’s earliest rivals, and this particular car is obviously setup for proper competition use with over-fenders, wide wheels with semi-slick tires, and a roll cage. Unfortunately the crew stopped only for a brief second in the carpark before heading back down the mountain.

Despite the conditions, it seemed like the pass was more popular with motorbike riders and cyclists than it was cars. Stelvio is steeped in two-wheel history, with the famous Giro d’Italia bicycle race passing through the area since the ’50s.

After some time at the peak it was our cue to leave; the temperature had dropped and it was getting dark. Unfortunately, the downhill road to Bormio was closed due to a big dumping of snow, so we took the other only available option (not counting going back) – Umbrailpass through Switzerland. Because who doesn’t like to tick another country off the list on a road trip?

I wasn’t sure would there be a story at all up here in the mountains, but the fellow speed enthusiasts I talked to on this day reminded me that wherever we go we are all united by the passion for driving, machinery, and road adventures – even if we don’t speak the same language or come from a different cultural background.

So despite the Stelvio Pass being busier than it’s ever been, it’s still the perfect place to meet like-minded petrol-heads. 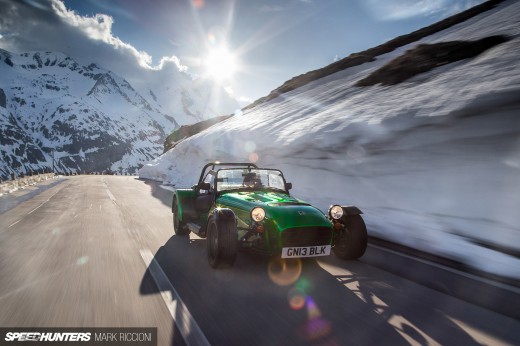 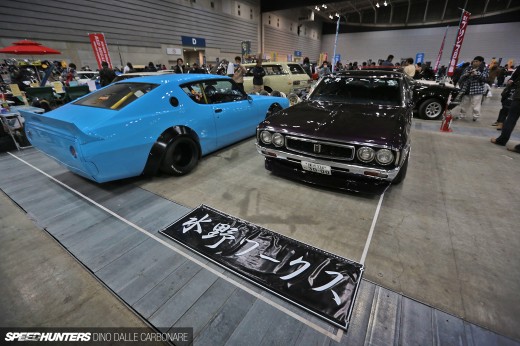 Coolest And Rarest. 5 Cars To Discover From Nostalgic 2 Days 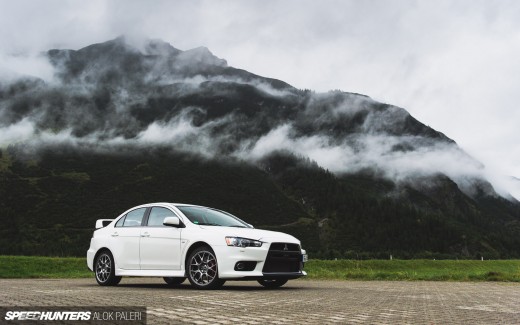 A Good Day To Drive Hard:
Hahntennjoch In An Evo

It's on the bucketlist!!! great pics btw!

Sick photos! Awesome cars! And that Miata! An awesome spot to drive one day!

oHW REALLY ? you Really have to cut it short ? I just started drinking a big coffee and enjoy my sit. ^_^

To be honest when I went to Stelvio Pass I was quite underwhelmed, the views were amazing but actually driving the road wasn't as fun as I had hoped and all the hairpins got quite tedious, on the far side of the pass were much more entertaining roads to drive. The sheer number of cyclists was an issue as well, we must have passed 40-50 cyclists each time we went up the pass (we camped near the bottom and made the run a few times so everybody in the car could have a drive).

Mini? Miata? Porsche? Jag? No... UNIMOG! Totally impractical but perfectly excellent at the same time. Driver must have arms like a hung ham...

the same road isnt it?

I've been waiting for this story ever since you left us at the Venice Beach Race to head off into the mountains. It proves once again, that the joy of driving and exploring in itself is worth a story. You got lucky to meet this eclectic group of vehicles and I think it's a safe bet to think that every single Speedhunters reader smiles when seeing the Unimog. It seems so out of place up there, yet so naturally at home at the same time.

I definitely smiled when saw the Unimog climbing up the hill

If I am not wrong, the "Col de l'Iseran" in France would be the highest montain road pass in the Alps instead (2764m). But maybe a bit less spectacular than the Stelvio.

Great photos btw. Autumn and spring are the best moments to visit these passes. Not only it's consideraby less crowded, but this weather you had during this visit makes the photos and atmosphere even more spectacular and dramatic!

i'm sure it's fun to drive, but i'd rather punish my legs and my lungs cycling up that road.

It's not that good of a road never was it's always been too busy and all you lot know it just because of top gear.

I live in switzerland ride the alps daily there are FAR BETTER roads to ride or drive in the area than that.

Trust me I've been giving motorbike tour 10 years and I've seen them all.

Dan, what are your favorite roads in Switzerland?
Absolutely agree with your opinion regarding Stelvio

I absolutely agree with you. I am from Switzerland as well and know the alps very good, and always when I read something like that about the Stelvio I need to smile. Stelvio is maybe no. 10 of the "greatest driving roads" in the alps. Top Gear just over-hyped it in the same fashion they usually exaggerated everything just for the entertaining purpose.

Sounds like Tail of the Dragon in the US. So overrated. There are twisty roads in just about any mountain range; find some roads that don't get media coverage and you likely won't have to deal with traffic... or cops that know it's popular for enthusiasts to race around. In Colorado, as long as you avoid the main highways linking the bigger tourist towns in the mountains, it's pretty easy to enjoy a drive (with a solid variety of corner types) any day of the week.

Yeah, that's the way I do. The less famous the twisty moutnain road is - the more fun it offers. Proven many times across the whole Alps

"This particular NA version has had a later NB model BP-4W 1.8-liter engine swapped into it, and combined with semi-slicks it’s surely a recipe for fun times on the pass."
Not when it's snowing, it isn't. :^)

Stelvio is great, i love it

But you have to get up early at eight o'clock in the morning, then you have a free road :-)> or in the evening.
It s best to start before breakfast from Livigno at seven o´clock, over stelvio from the south side and back to livigno over ofenpass.
a cool fast round in the morning 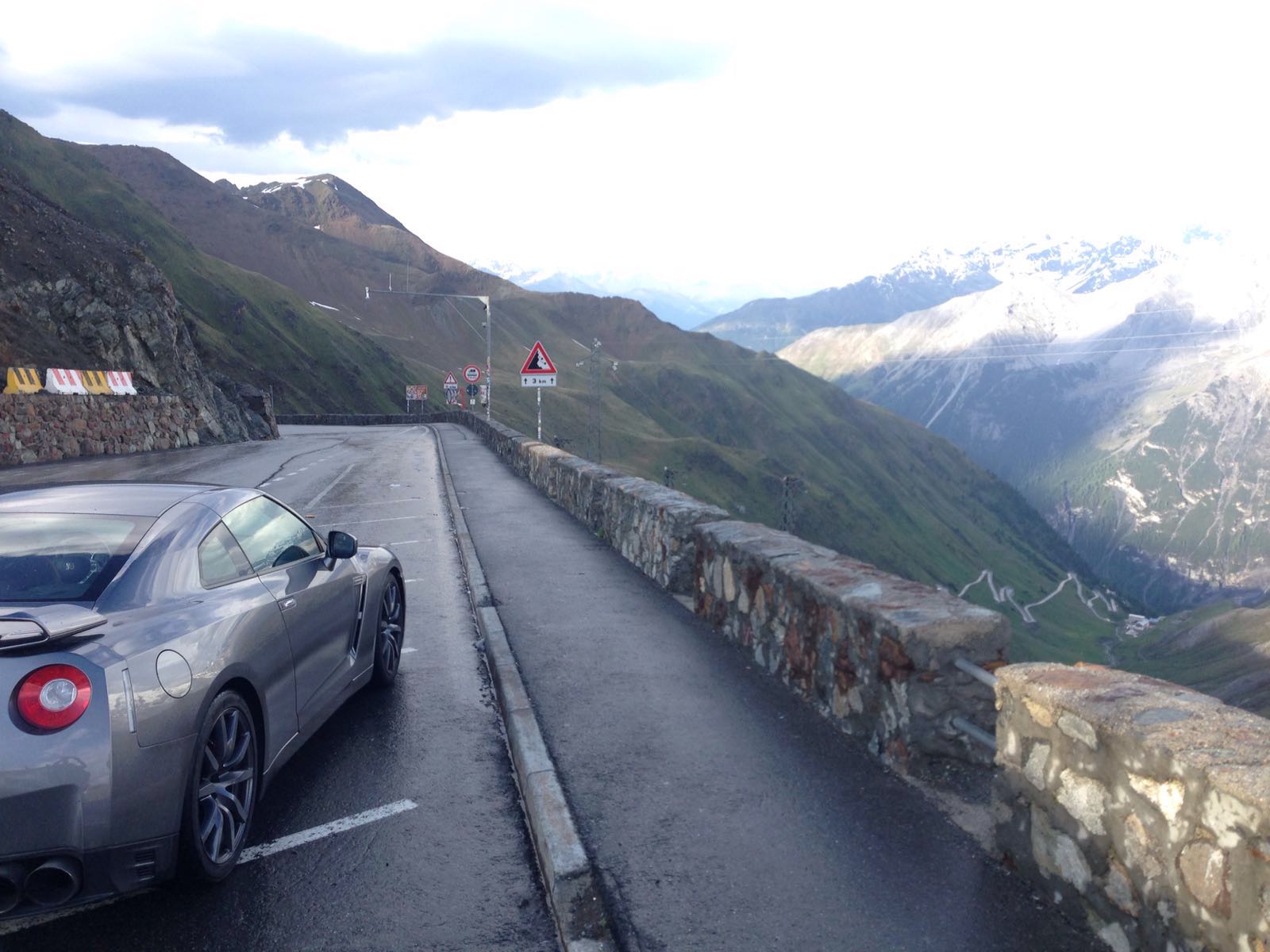 Great post with great pics from great cars! Although I have to ask, got more specs and/or pics of the Passat B2 Wagon?

Not really mate. It was parked in the corner, looked like the sticker bombing was the biggest mod on it

I did the Stelvio probably 12 years ago in a car with a few friends. It was part of a rally through Europe and I'll admit we were really looking forward to it. The only issue was the car we were in, it was a 1992 Mercedes 190E 1.8 manual. With 3 of us in the car and all our luggage it was a real struggle to get to the summit. Once we were at the top we realised one of the core plugs on the engine was leaking. The descent was really breathtaking though and a real punishment on some of the cars we were on the rally with. We got down okay but by the end some cars brakes were just cooked. Needless to say we did another 2000 miles in the car that week before the headgasket blew 5 miles after getting off the ferry in Dover on the way home. Great times, I miss being a student. That said I need to revisit it with one of my current cars which could be a lot more fun.