SHARE From Blown Up To Boosted: Building A Type R Dream

Ever since high school, I’d dreamed of owning an Acura Integra Type R. After graduation, I bought my first car, an Acura GSR – close, but still so far. It would be another five years before my dream became a reality.

It was October 2015 when my cousin found a stock standard ’98 Type R for sale in a small town four hours outside of Calgary. He sent me pictures from the sales ad; the car looked good and a week later he brought it home. What I wasn’t expecting was for him to offer me the Acura at the price he had paid for it. At first I wasn’t sure if I could afford it; I’d definitely need to sell my GSR first.

Luckily, my car sold the same week I advertised it, and within days I was flying down to Calgary to pay my cousin, do the document transfer, and then drive my new Type R home. My friend Nigel flew in too, and after picking him up from the airport we made the 10 to 12-hour road trip back to Vancouver, BC. As winter was just around the corner, the car went straight into garage storage.

In February 2016, a sunny day finally provided an opportunity for me to take the Acura out for a cruise with friends. As the car had no insurance or plates at this point I picked up a day permit, and then had a good time driving around the city. It was when we all parted ways in the evening that things took a turn for the worse. Driving on the highway, a loud bang sound was followed by a loss of power and pillows of smoke from the exhaust. Luckily my house wasn’t too far away, and I was able to limp the car back to my garage.

Right away I began researching what the cause of the issue might be. A lot of people said it would be the headgasket, while others said the pistons rings had likely gone bad. I didn’t want to believe it would be the pistons, as that would be a very expensive fix for a kid who had just spent all of his money.

The next week I had the car towed to a shop where I had booked it in for a headgasket replacement. Unfortunately, I ended up getting the call I definitely did not want to receive: on removing the cylinder head the mechanic had found a piston with a chunk missing out of it and cylinder wall damage. In that moment, my Type R dream came crashing down.

I was given two options to get the car up and running again: repair the damage or find a new engine. With no money I couldn’t do either, so I just had the car towed home, where it would ultimately sit for 12 months.

During this time I decided to rebuild the engine, funding it by picking up all the overtime I could and working all of the statutory holidays. Throughout the year I started to acquire all the parts I’d need – plus a whole lot of others. When a JDM front end came up for sale, I took the opportunity to grab it, so I could convert the car’s original USDM quad headlight face to JDM spec. Adding to this I picked up some J’s Racing wide front fenders and a First Molding carbon fiber hood.

The car finally went back to the shop in February 2017, where the cylinders were bored out 0.5mm to remove the damage and accept new oversized CP forged pistons. I also added Carillo forged rods and ACL race bearings. The reason for going down the forged route? A Peak Boost turbo kit featuring a T3/T4 60-1 Garrett turbocharger and TiAL external wastegate.

A month later the engine work was complete, at which time the car was taken to The Independent Speed Shop where it was initially tuned to 280whp through the Hondata S300 ECU. A couple of weeks later, I took it back with a new 4-bar MAP sensor and it made 350whp.

In August 2017, it was time to fit all the other parts I had collected, including 16×8-inch RAYS Volk Racing TE37 wheels, a J’s Racing carbon fiber GT wing on Aerogenics 275mm wing stands, BC Racing BR coilovers, AEM Electronics gauges and more. I invited a couple of my friends over, ordered some pizza, and we had an install party. Then in May this year, I decided to get a C-West front lip and repaint the car as it was previously three slightly different shades of white. A couple of months ago we added the Project Mu brakes.

Throughout this build I’ve made a lot of new friendships, and today some of these people are my closest friends. I always think that if wasn’t for this car – and the engine blowing up – I wouldn’t have met so many great people. Even if the car was taken away from me tomorrow, the friendships that have been made will last forever. 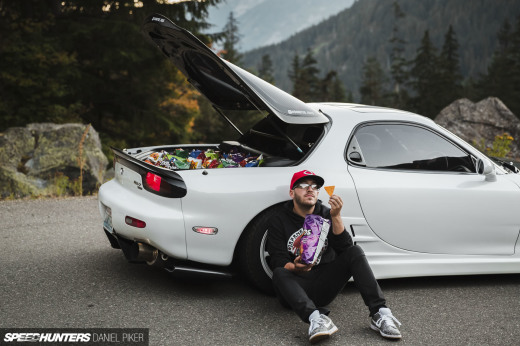 love it. bravo!!! worked hard for this and well done!

Great article, this is what modified car ownership is all about.

Ahhh Delta Port and Boundary Bay, shot many a car out that way. Cool to see some local content.

Car looks so good. Miss my DC2. Definitely need another one soon.

So cool to see this on here as I've just bought a C west lip and also have a vented bonnet to go on as well. Wasn't too sure how it would look until seeing these pictures. Looks awesome

Did you had problems getting the turbo kit?

Very clean specs, love the turn down muffler! Forged re-built motor and turbo kit was emphasized but no shots of the engine bay?

your Type R is AMAZING! and best purchase of your Life. COOOL

Like most of us we have a similar story and you inspired me so much. we pushed and saved to support our passion. I started in a dc5 and 9 years ago then just recently I found a dc2 rolling chassis and instantly fell in love. Just saving for more than a year now so I can afford a k20a swap and I am so looking forward to finish the dc2 to enjoy it with the dc5.

Great article and car! Curious though... No engine bay pics?

Wasn't this car on Super Street Magazine in 2013?

and it's for sale!

What a journey?!? Respect the passion and love. I've had to source a new Z following a dishonest driver ruining my first one. It's a slow build so I know the pain too well. It's all about the fine details that define it. The emotional (and financial) investment is so worth it despite some thinking that cars are simply depreciating assets.