SHARE More Than Just A Swap: The Drift Fusion

The American M5, a Falcon for the US, a Mondeo with muscle, the four-door Mustang – the internet has been quick to bestow many titles upon Matt Soppa’s 2016 Ford Fusion. Let’s just say the hype is real.

When this Fusion rolled off the assembly line, it was front-wheel drive and housed a 2-liter four cylinder – great for sipping on gas and making it to work on time, but not incredibly sporty. Fast-forward a bit and the previous owner gets in a front end collision, insurance totals the car, and it goes to auction where Matt picks it up for cheap then brings it home to strip apart in his garage.

After realizing the independent rear suspension from a 2015 Mustang lined right up with the factory mounts, and that a Coyote 5.0 would fit in the sizeable engine bay, things started to fall into place.

Up front, an S197 (2005-14 Mustang) subframe – mounted with small adapters and some brackets – houses a S550 rack and pinion with drift-spec control arms to increase the steering angle. At the corners, a hybrid set of S197 and S550 BC Racing coilovers bring the whole package down to earth and help steady the big body while drifting.

The Coyote pushes power through a Tremec TR6060 sourced from a 2007 GT500, and links up to a complete S550 3.55 rear end via a hand-built transmission tunnel. The exhaust is routed via slightly modified Patriot headers and 3-inch straight pipes to the rear, where the sound is nothing short of deafening.

Inside, the Fusion is all function with a full custom GSK Fab roll cage and two of the four OMP race seats Matt eventually wants to install to create his own drift taxi. Atop the transmission tunnel, the factory shifter fits right in next to a Justin Pawlak hydraulic handbrake linked to a Hotline Performance Wilwood dual caliper setup out back.

What’s left of the dash houses a custom switch setup and a tablet-based gauge cluster mounted in the center console, allowing Matt to keep an eye on all temperatures and levels while otherwise thrashing the Fusion. A fuel cell replaces the spare tire in the trunk, complete with a DeatschWerks fuel pump to send fuel reliably against any g-forces drifting may incur upon the system.

It’d be easy to say this is just an engine-swapped sedan and call it a day, but to do so would minimize the effort and engineering that went into making so many parts not only fit together but perform well together – much more than I could ever fit into an article succinct enough to read without a nap in the middle.

It took a little over a year’s worth of afternoons, nights, and weekends to make this ‘what if’ become reality, but I’d say ‘worth it’ is one more title we can add to the list. 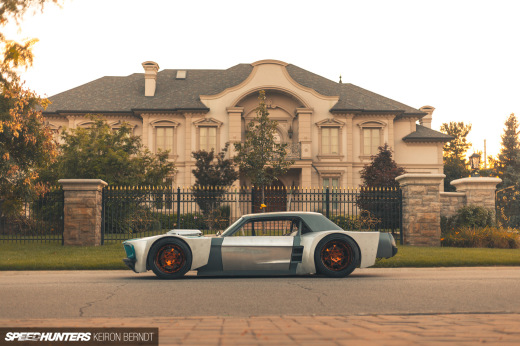 I remember when I used to do design contests on nfsunlimited.net...this type of design would've been laughed off to the oblivion

That might be the first drift car I've seen without a giant bench-like wing attached to it.

very cool! all too convenient that mustang parts fit so perfectly. makes you wonder if there's some nutcases in the design department! stunning car, and hats off to the builder. now, who wants to help me try the same stunt with a 2016 Dodge Dart and some AWD Charger bits?

I don’t mind panel gaps in a track car like this it’s amazing. It would be nicer with no livery but class build well done man I want one

someone in America needs to import an FG falcon XR6T

Is it road legal? If it was and was made more subtle it would make an insane sleeper! Coyote Mondeo! That would shut up some beamer guys

Wilwood calipers on the rear while front still utilize the stock items. LOL!

This is awesome, and different.

The Fusion is a good looking car. In stock trim the Fusion Sports are quite the car, and with a tune they are pretty quick. I always wondered about the interchangeability with other Ford cars. I have a newer SHO and love it, but the Fusion is such a better looking car.

I'd like to see more pics of the subframes from underneath the car. Quite intriguing that the S550 rear subframe bolts in!