SHARE One Saturday, Two Events & A Whole Lot Of Low

We’ve got a really great car scene out here – a better one than many of the locals are even willing to admit. Sure, half the year nearly all of the cool cars vanish, seeking refuge from our increasingly terrible winters, but during spring through fall things are pretty lively. There’s usually a few small events every week and larger ones both days of the weekend, and more than one on the same day isn’t at all uncommon.

Typically, whenever I hit two events in a single day I’ll cover each with their own post, but today I’m going to double down on my efforts. I mean, what better way to present the variety Ontario has to offer than by showcasing what can be seen in eight or so hours.

Northern Showdown and the ELTA Summer Bash are events I have covered here previously. Each are great and I make a point to try and not miss either every year.

One predominately features trucks, where the other mostly features hot rods and classics. With an hour and a half highway jaunt separating the two, when they fell on the same date, making the decision to convoy from one to the other was a pretty simple choice to make.

When I covered the Northern Showdown in 2018, I admitted my pretty serious obsession for mini trucks. This year, I’ll save the extended monologue and just say I still like them. A lot.

Creativity mixed with attention to detail and fabrication, mini trucks are often still the best place to see some real cool outside-of-the-box thinking.

Mini truckers pioneered the ‘frenched’ in and tilted license plates, and it’s cool to see them still alive within the scene. Similarily mini truckers were also the first to borrow tail lights from the fourth generation Supra, so I’m really waiting to see who’s got a wallet deep enough to snag a set of new A90 tail lights and stick them on the back of a truck.

I think I might have to wait a bit for that one.

If there was an unofficial theme to Northern Showdown 2019, it was go big in every way. The show field was the largest it has ever been, the wheels were giant, and many of the vehicles were straight-up massive.

Two of the largest were this Ford F650 and the 1972 International Loadstar I found parked up on on the upper bowl of the sprawling grass venue. People often see industrial trucks like these hammered on the floor as ruined, but thanks to modern air suspension they’re usually still very much capable of being used for what they were originally intended.

Cargo was a bit of a hit at this year’s event. The ’68 Dodge Sweptline above showed up with an equally vintage teardrop trailer. The Megalodon Ford F450 is an absolute behemoth lifted eight inches with the air bags deflated, but can air up to 14 inches in total.

‘Mega’ pulled a fifth-wheel trailer carrying a 1965 Cummins-swapped C10. This Chevy pickup is perfectly operable in its own right, but if you can bring both, why not bring both?

The ‘Cargo’ winner, and ‘Best of Show’ recipient was TLD Customs & Powder Coating who rolled out their 7.3-liter turbo-diesel-powered Ford COE. The truck sits on a custom air suspension equipped chassis, and has a tilting flat-deck out back.

On top of the flat-deck was their Dodge D100, which also features a tilt bed, and on it was a drift trike. You’d be hard-pressed to find a cooler triple-up anywhere.

OK, sorry, I’m not tone deaf. I know not everyone loves trucks, so I made sure to get some car coverage from Northern Showdown as well. The show started as more of a truck thing, but recently it’s pulled in some pretty heavy hitters in the car department as well.

DA Integras are darn near extinct in these parts, so seeing this one – on Kosei K1s no less – brought back plenty of nostalgic feelings. These are still such a great-looking car three decades after their initial release.

Customs are something I always appreciate and a genre I’ve yet to really nerd-out about here on Speedhunters. I imagine I’ll get there soon. I feel like the two above are great first candidates for potential features, don’t you?

The car that bent my brain the most at the show was, as the license plate suggested, a real oddball.

I imagine very few of you picked out this car as an NB Miata from the way I cropped the first photo. Both lengthened and widened, it doesn’t really retain many factory Miata proportions.

Sitting on a truck frame and powered by a driveline lifted from a tenth-generation Ford Taurus, and featuring the eyes of a Pontiac, this bespoke speedster wasn’t for the purist at heart. Talking to the owner, the original builder built it simply because he could.

Once the dust had settled at the Northern Showdown, I continued on westward to a small street in London, Ontario, the site of the East London Timing Association’s Summer Bash. More recently a track-side event, last year the ETLA moved the show back to its original street side location for the 15th anniversary.

Since I knew this event would be my final of the day, I took my time taking it all in.

I strolled up and down the street looking for anything unique and interesting to point my camera at, and it really didn’t take all that long to find subject number one.

I don’t think I’ve ever seen a Nash Statesman before, never mind a hot-rodded one. I really don’t imagine there’s too many of these left rolling around Canada.

I’ve seen a couple of different takes on the Ranchero over the years, but this one just might be my favorite for being so different.

As I was attempting to find the owner of the banana-yellow Ford, I heard the unmistakable sound of nitro-fueled drag cars starting up for the ‘cacklefest’, so did my best to hustle down and get some of the action.

I wasn’t able to get as close as I’d liked, but for the sake of my hearing I was probably close enough.

Nitro engines cooling, I headed back down the street to see what else I could find and I spotted this gorgeous custom laying out on the pavement. Under the setting sun the lines of the car were absolutely stunning.

A car like this will always look cool, no matter how much times or trends change.

The same could be said for this very traditionally-done five-window coupe. Was it built this year, or 40 years ago? Visually it’s hard to tell, but either way I wouldn’t be at all against a cruise.

As the sun dipped for the night I started to run out of usable light for the equipment I brought with me so eventually my camera went away, I grabbed an adult soda and listened to the sounds of hot rods rumbling into the night.

The only thing that could have made this particular day better would have been driving a truck or hot rod of my own.

You see I absolutely love this car show and here’s why, normally car shows are one sided in a type of car build (for ex; hot rod car shows or Stancewars, etc.) but this one has like a blend of everything where everyone joins into one as a car guy

Yeah, I'm a big fan of Northern Showdown for the same reason. A bit of everything in one shot while catering to my desire to see all the slammed trucks.

I'm always in for more minitruck coverage!! It's motivation to get off my ass and finish my own.

Yea, I’m curious too. What are you building?

What are you building? 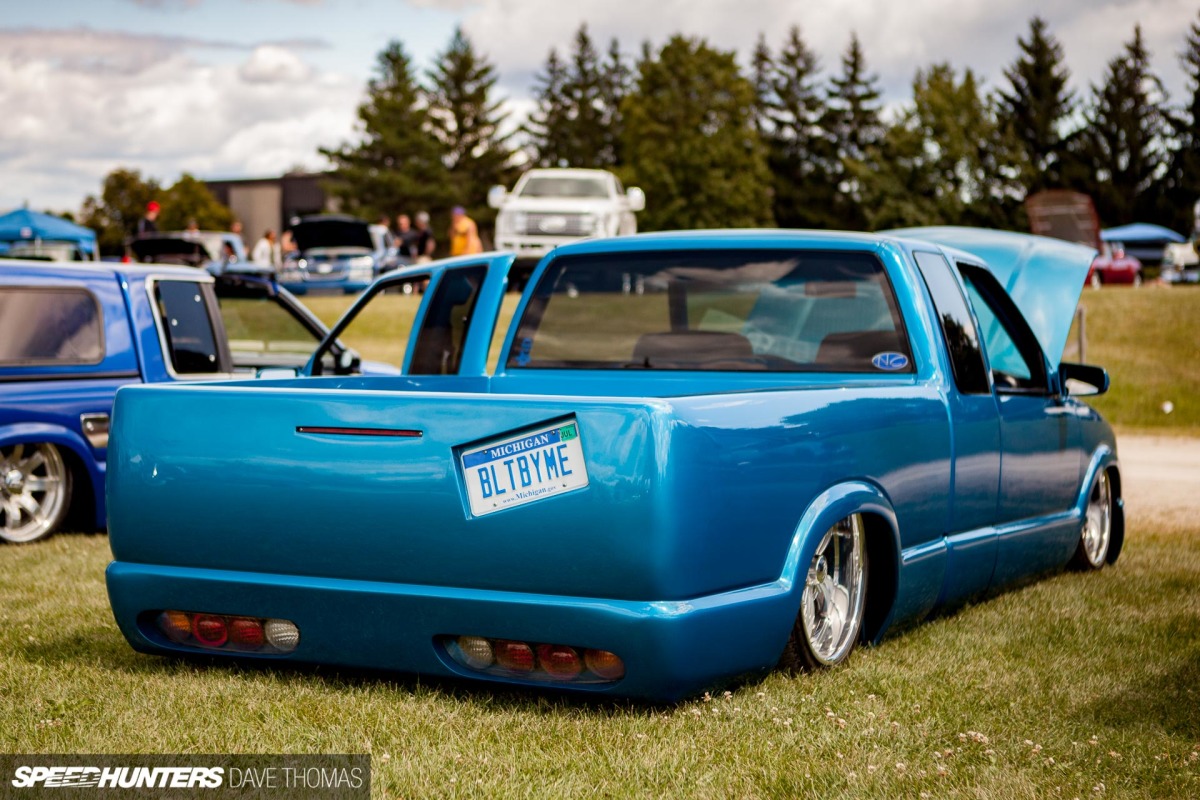 You mean the fact that basically the entire half of the cab commited suicide?

Get low get low

I really need to make a trip back to Ontario one day, this years adventures got cut short prematurely because of wildlife and subsequent repairs.