Isn’t it sad to think that the only car Lancia now makes is a 69hp, two-door city car called the Ypsilon. A car which is only sold in the Italian domestic market.

Once a brand synonymous with technological advancements, luxury and sportiness, today Lancia is in the toilet. But how could this have even happened? Lancia must be one of the unluckiest brands out there, but the reality is that automakers do fail.

The one saving grace here is that Lancia isn’t dead and buried.

Its parent company Fiat (or the FCA Group to be precise) are keeping Lancia alive with the Ypsilon, perhaps until they figure out what the hell to do with it. If they wanted to kill it off completely, I’m certain it would have already happened.

When Fiat acquired Chrysler it was all about pulling itself and the brands that came with it out of the red. The man in charge, Sergio Marchionne, put in place a plan of attack that brought back profits and in the process made decisions that are slowly making Alfa Romeo great once again.

Unfortunately, Marchionne passed away last year, so who knows what’s in store for Lancia, if anything at all. I really hope the brand revival was part of his master plan, though. With current Lancia values soaring (a 1992 Delta Integrale Evo recently sold for €120,000 at an RM Sotheby’s auction) new Lancia performance cars might be the only way a lot of people will get to experience this brand.

But as opinionated enthusiasts we must make ourselves heard when it comes to things we are passionate about. In this case, we need to get on the bandwagon and support the #makelanciagreatagain movement until FCA realizes there’s a myriad of Lancia models they could resurrect.

Of course, they’d need to do them properly, just like they’ve done with the Alfa Romeo Giulia and its Quadrifoglio version, the 4C, and the planned sports cars that are rumored to be coming in the next few years.

I’ll do my part by reminding everyone what great little cars Lancia used to make. Models like the Fulvia, and in particular this Coupé example competing in the recent 2019 Marronnier Run.

As the badges at the back announce, this is the Rallye 1.3 HF version, which was the hottest Fulvia you could get your hands on in 1967.

The 1.6 HF ‘Fanalone’ version, as equipped with a more powerful version of Lancia’s famous four-cylinder engine and recognisable by its two bigger inner headlights, didn’t come till 1969.

This car was even fitted with magnesium alloy Campagnolo wheels wrapped in modern Pirelli rubber.

The Rallye 1.3 HF was a technological tour de force for the time, sporting double wishbones all round and disc brakes at each corner. It all added up to a superb steer through the twisties.

However, unlike its competing models of the day – Alfa Romeo’s Giulia and BMW’s 2002 – the Fulvia was front-wheel drive.

It was the unique engineering solution – something that many Lancias of the past are known for – that made this model standout. ‘Peculiar’ is a good word to describe Lancia’s V4 engine. Think of it as a vintage four-cylinder version of a Volkswagen VR6 engine – an extremely narrow 12-degree angle to the two banks of pistons sharing a common block, but more interestingly a common head. This meant only two camshafts were needed to actuate the intake and exhaust valves for all four cylinders.

Lancia pioneered the V4 engine in 1922 and used it throughout its long history in a variety of models, the Fulvia being the last one in 1976. As a side note to all this, let’s not forget the ‘Triflux’ engine which was one of the best examples of Lancia’s thirst for innovation. The story I wrote about it back in 2013 remains one of the most popular on the site.

The owner of this Fulvia was so proud of his unique powerplant that he even had a technical picture showing the layout.

What seems really crazy to me is the actual positioning of this engine. It’s mounted as far forward in the bay as it could be – completely in front of the two driven wheels – and sat at a 45-degree angle. That’s Lancia for you…

I’ve never had the pleasure of driving a Fulvia Coupé like this so I have no idea what the benefit was, but I’d imagine it would have to do with boosting traction through weight distribution and livening up the rear end for a tad of mid-corner tuck-in and lift-off oversteer.

But how about understeer? I’ve always heard people praise the Fulvia for its handling, so I guess Lancia’s engineers knew what they were doing.

The interior is very ’60s Italian and has the typical mix of sportiness with a hint of luxury that always made Lancias that little bit different.

The owner even had two detailed models of the Rallye 1.3 HF sitting on the dash.

Vincenzo Lancia, a race car driver for Fiat, designed and engineered his first car – the Lancia Alfa 12 HP – in 1907. The car entered production in 1908 and over 100 were sold, some used for racing. The rest is history, all 111 years of it. Now it’s up to FCA to make this once epic brand great again.

The Marronnier Run on Speedhunters 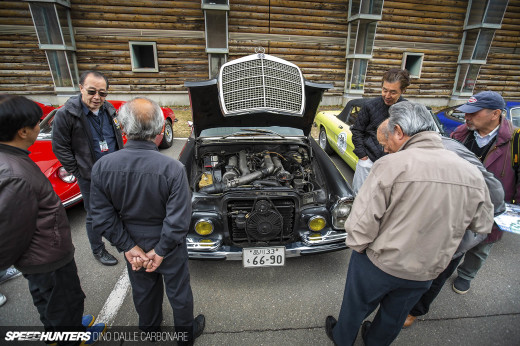 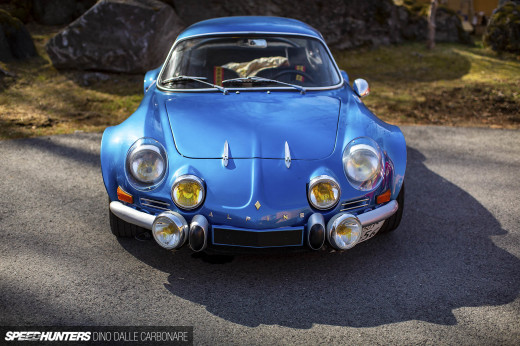 Alpine A110: The French Arrow

Isn't this amazing, that Fulvia's engine sits so far forward of the front axle, right? Audi always had this problem, that it makes the car so nose heavy, so all Audis, even the legendary Ur Quattro understeers like hell, so you have to learn to drive around it. But Fulvia, you don't have that problem. Sure it does understeer ultimately, but it doens't have that heavy-footed plowing feel, instead, it feels light, it feels agile, it feels responsive. I've never quite figured out what the magic is. Fulvia is an amazing car.

Man you really make me want to drive one now!!

throw the slogan on a red hat, then anything is possible

I hope some get revived. I spent many happy days driving my red with beige interior Lancia Beta 2000 coupe in north west England and touring Scotland. Power, speed, acceleration, exhaust noise, what more could anyone want!

Ohh... Well.. I remember the story about the triflux! i was the first one to comment about it

I always find it interesting that Lancia have won various rally championship with a FWD, RWD and AWD vehicles.

Hats off to you Sir.

Yes, pretty please FCA, with a cherry on top!

I was really hoping FCA would have used the Dart platform to build a Lancia Delta and Eagle Talon successor. Sadly that's not how history turned out, but it's nice to imagine.

do you have plans on covering Outerplus / Garage Shimaya? been waiting for years on that one...

Oh man! Thanks for reminding me! I'll get there one of these days

V4 configuration, Aids the whole weight distribution. Think of it this way. in an audi, the front wheels are pressed as far forward to fix the problem. BUT the LONG engine block defeats this purpose somewhat (Also it being made of german iron, not alu). so the incredibly short engine designed V4 (see flatter lower CG+ literally being pressed into the grille) (you can see half the transmission in the engine bay "yay to rally/maintenace") means that it's distribution is really good.

Lancia: mechanics by mad engineers, Body by creative stylists.
Modern cars: mechanics by stylists, body by engineers, being whipped by accountants and "intelligent" focus groups, who know literally nothing about how human beings work sometimes, i mean, the s15 marketed to single women.... the Supra mk5 to ...... ok literally who is going to buy this? and not buy it to be modified, with a better engine